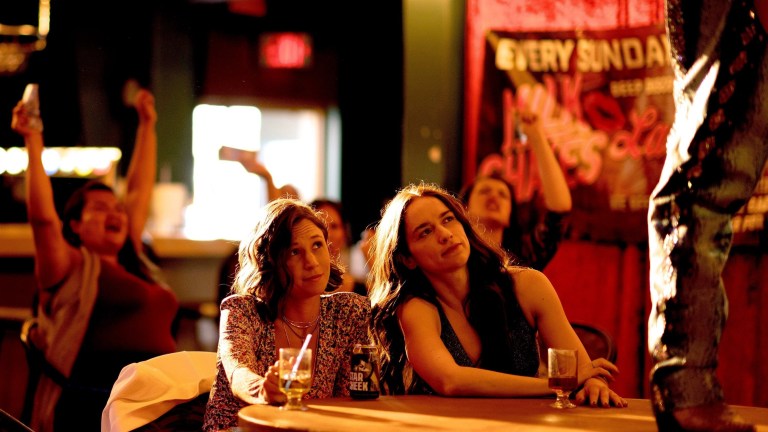 Damn, it’s good to have Wynonna Earp back. “Love’s All Around” has a clever premise that wastes no time throwing us back into this world after more than six months away. In a mix of Greco-Roman mythology and Midsummer Night’s Dream, Waverly makes a bet with a stripper/food deliverer/”love professional” named Demetri (I guess Puck was already taken) that love is real. Unbeknownst to Waves, Demetri is actually a Cupid and he has slipped a vial of love flakes into her blazer pocket. Whoever touches a flake will fall in love with the first person they see, which leads to Waverly inadvertently spreading the “love disease” around Purgatory. Hilarious chaos ensues.

While Waverly is spreading love, Wynonna is falling apart. Consumed by the guilt she has around killing Holt in the midseason finale (a choice her fractured relationship with Doc has now become a symbol of), Wynonna is self-medicating with a combination of alcohol, sex, and Peacemaker. She’s suffering and further isolating herself in her pain. She’s doing badly enough that she misses Waverly and Nicole’s engagement party and, when she tries to make it up to them, manages to bring them on a very terrible bachelorette party (which is, honestly, a pretty competitive descriptor to earn).

Waverly demonstrates characteristic patience with her sister while also trying to hold her accountable for her actions. This seems to only make Wynonna judge herself harder. Our central heroine makes frequent references throughout the episode to how much everyone loves angel Waverly, implying that she falls somewhere on the other end of the spectrum. It’s an old story and pressure point for Wynonna, who was framed as the “screw up” in their family and community for so many years. While Wynonna had found a purpose and a support system since her return to town in Season 1 that kept those negative voices at bay, old habits die hard and, while Wynonna’s self-criticism may have originally come from external forces, right now, in this family she has built for herself, no one is judging Wynonna harder or harsher than Wynonna is judging herself.

Well, Doc might be judging Wynonna a little bit. Roughly a month after the events of the midseason finale (spring has sprung!), Doc is still struggling to forgive Wynonna for killing Holt. He is on his own journey of self-forgiveness and recovery and, frankly, he isn’t willing to sabotage his own mental health to join Wynonna in her pain… especially when he knows that, in the long run, this probably wouldn’t help Wynonna. The two obviously still love one another, but they are currently at an impasse: Wynonna needs to believe that she lives in a world where shooting Holt in the back was the necessary option, and Doc needs to live in a world where there are better ways. Because of this, these starcrossed lovers are living worlds apart.

This becomes particularly evident when the gang (including Nedley, Nicole, Amon, and Bunny Loblaw) are doused with a cloud of love flakes and all of their walls come down. The way these two stare into one another’s eyes is so different from the Cupid-inspired desire of the episode’s other connections. Their love isn’t simple and manufactured, it’s so very complex (just as Wayhaught’s is shown to be, even if Nicole really wants to get her body closer to Waverley’s, like, five minutes ago). “I don’t want to let go,” Wynonna tells Doc as the effects of the spell fade. (Um, same-sies, but with this TV show.)

The second half of Wynonna Earp Season 4 is burdened with the weight of Syfy’s cancellation of this beloved queer, feminist series. What might have been a perfectly fun spell-of-the-week episode of Wynonna Earp hits different when you know it is one of only six episodes left (barring the show getting picked up elsewhere, which I haven’t yet given up hope of happening). This was a fun episode, but in the long shadow of the show’s potential series finale, I perhaps unfairly want more. These kinds of “the gang goes mad” episodes are best when they tell us something new about our characters, and I’m not sure “Love’s All Around” did.

That being said, one of the thematic elements the episode pulled off was in eventually expanding the traditional definition of “love.” While the first few people who fell under the love spell became pretty horny, as more people fell under the spell, it became clear that sexual desire is far from the only expression of love. When Doc falls for Cleo, he spends his time doing emotional labor, encouraging her to forgive herself in a way that he hasn’t been able to do with Wynonna. And after Wynonna accidentally rains the love flakes down on the crew at Shorty’s, they spend most of their time dancing platonically in one another’s arms. Plot-wise, the rules of the love flakes were not as clear as they could have been, but, thematically, this episode nailed it. Waverly confirms it for us: “Love might be the only thing that’s real.” It might not last, and it doesn’t always look the same, but if this show believes in anything, it believes in love. If Wynonna Earp does end after this season, what a legacy that will be.

Wayhaught is having a “medium fuzzy” wedding, y’all… This is going to be the series finale, right?

I wish Wynonna Earp had found a way to lean a bit further into the aesthetics of Midsummer Night’s Dream. Fairies and flower crowns are not necessary, but always encouraged.

Doc’s sweater this episode, tho.

Whoever came up with the name “Bunny Loblaw” is a genius.

I continue to wish Jeremy was in this show 160% more.

“At first I thought that was a new, woke term for ‘strippers.’”

It is vital that this episode has a consent clarification (and it does), though I’m not sure they totally nail it. Although Demetri tells Waverley that “sex doesn’t enter the equation unless it’s what the client wants,” that doesn’t mean “the client” isn’t ignoring the consent of the person they want to have sex with.

“Be your own legacy, Cleo.”

Yikes, Cleo Clanton is ready to continue M’am’s killing campaign… and Billy might be on board too?

“Have a good evening, lesbians.” “Actually, Waverly is bisexual.”

There were so many good references in this episode, but my favorite was probably Bend It Like Beckham.