In an interview earlier this week, WarnerMedia Studios CEO Ann Sarnoff stated definitively that the studio “won’t be developing David Ayer’s cut” of Suicide Squad, the DC-based movie that Ayer directed and that was heavily retooled in post-production before its 2016 release.

While rumors and speculation about an “Ayer Cut” of the film–which was trashed by critics (and some fans) even as it climbed to an astonishing $747 million box office gross worldwide–have been around almost since the film came out, a nascent campaign to release Ayer’s original version of the film started in earnest last year following the news that Zack Snyder’s Justice League would be coming to HBO Max.

Ayer himself said last year that his cut of the movie “definitely exists” and asked fans to push for its release through the HBO Max streaming platform, but Sarnoff’s brief, decisive comment seems to have put an end to any possibility of that happening (not that some fans won’t continue to try).

That is, in this writer’s humble opinion, the studio’s right. No matter what you may think of the Snyder Cut of Justice League, there is at least one valid, overarching reason (if not more) why its existence could be justified. Zack Snyder never got to finish his version of the movie due to a terrible tragedy that led him to leave the project and, rightly, focus on his family. Snyder never even did a first cut of the film–all he had was a rough assembly of hours of unfinished footage.

Even if Warner Bros. Pictures was looking to make extensive changes to the film anyway, had Snyder not left, he would have more than likely been directly and personally involved in whatever revisions or reshoots were undertaken.

The Ayer/Suicide Squad situation is different; Ayer did apparently turn in a cut of his movie–but by the time he did, the studio’s thinking about the film had changed due to the underperformance of the extremely grimdark Batman v Superman: Dawn of Justice and the stunning success of the irreverent, humorous Deadpool, both that same year. The studio did not want the version that Ayer turned in, opting through reshoots and re-editing to make a more lighthearted adventure.

Ayer was, despite directing a string of films that do bear his personal stamp, essentially a director/writer for hire on Suicide Squad (he joined the project in late 2014, and filming began in the spring of 2015). On the other hand, Snyder had been more or less the chief creative visionary on the initial phase of the DC film universe, with the tone set by his first two films–Man of Steel and Batman v Superman–setting an overall course and roadmap. Of course those plans were later largely abandoned.

Also, the cold, hard truth is that the theatrical Suicide Squad, whatever one may think of it, made money. A lot of money. Even with the costs incurred by reshoots, along with the original budget and the marketing costs, the movie made nearly $800 million worldwide and easily went into profit for the parent company to the tune of more than $158 million. And that’s without a theatrical run in China, the world’s biggest film market where Suicide Squad was never officially released.


From Man of Steel to Zack Snyder’s Justice League: A Complete DCEU Timeline 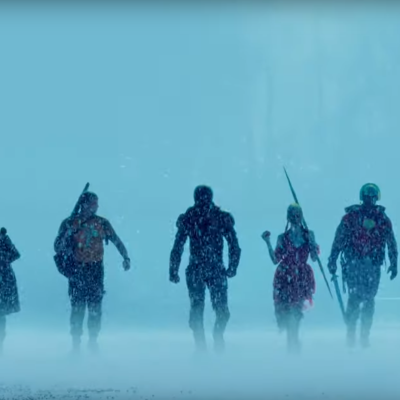 Meanwhile the theatrical version of Justice League, starring characters far better known than those of Suicide Squad, sputtered to $658 million worldwide, possibly losing $60 to 90 million for Warner Bros. While a wide theatrical release for the four-hour Snyder Cut is pretty much out of the question, the company could hope to at least make up some of its revenue gap via HBO Max subscriptions (although the costs of restoring Snyder’s version could make it more of a loss leader than anything else–we don’t have the bandwidth or information to do all the financial calculations on this).

At the end of the day, if we were the studio, we wouldn’t want to keep looking back. Suicide Squad is already five years old and there is a brand new Suicide Squad movie coming out in just a few months, featuring a mix of old and new players and a decidedly different directorial vision. Although Ayer was initially going to write and direct a sequel, once he left the franchise that was pretty much the end of his involvement, and any creative direction he might have had.

As we said earlier, Snyder’s version of his movie–and indeed, his version of the DC universe–was never truly brought to completion due to unforeseen circumstances. Plus the patchwork nature of the Justice League that was released in 2017 seemed to cry out (even more than the lousy Suicide Squad) for restoration. Snyder’s stake in resurrecting his vision has seemed all along to be much more personal than that of Ayer’s.

And once you open that Pandora’s box of acquiescing to all fan demands, where does it end? Does Patty Jenkins shoot a new Ares-free ending for Wonder Woman? Will Snyder go back and change the climax of Man of Steel so that Superman doesn’t kill Zod? Does Disney mandate a new version of The Last Jedi to please the toxic fans who attacked that film? (Although they kind of already gave into their demands on The Rise of Skywalker.) Where is the Josh Trank cut of Fantastic Four? The list goes on and on.

While the completion of Zack Snyder’s Justice League will remain a singularly unique event, WarnerMedia–nor any other studio or creative entity–is under any obligation to go back and revise any other project within its purview just because someone (or a lot of someones) asked for it. As an infamous character from another cinematic universe once said, “The work is done.” The DC universe is ready to move on, and so should the rest of us.