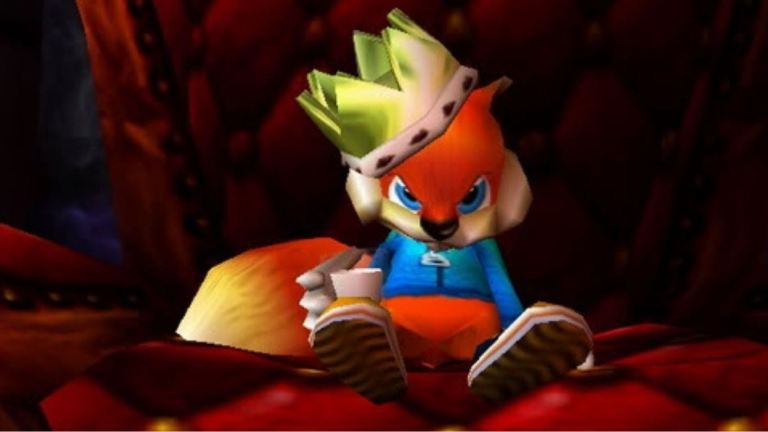 As an M-Rated game developed for the N64, 2001’s Conker’s Bad Fur Day was always going to stand out from the pack of that console’s largely family-friendly lineup of major titles. Even in the year 2021, though, it’s hard to believe that Nintendo ever allowed one of their own publishing partners to release a game so absurdly vulgar, crude, and violent on one of their consoles.

That’s the thing that remains so shocking about the title some 20 years later. It’s not that Nintendo greenlit a “mature” game for the N64: it’s that the game they approved utilized the visual and design conventions of family-friendly titles and emphasized the kind of humor that was most popular among two distinct audiences: the kids who played Nintendo games and whispered fart jokes on the playground and frat boys. The game’s advertising campaign even included custom urinal mats, promotions with Playboy and Maxim, and targeted ads at major Spring Break parties!

All these years later, that’s kind of what people remember most about the game. Conker’s Bad Fur Day suffered from awful controls, a worse camera, and painfully linear design, but it went so far over the top at a time when absolutely nobody saw it coming that it’s hard not to look back fondly on the very idea of such a thing existing.

So why did a seemingly beloved game like Conker’s Bad Fur Day never get a sequel? The answer to that question comes down to several factors that have kept the unhinged Conker in control after all these years.

First off, you should know that Conker’s Bad Fur Day was not a huge sales success. In fact, the game was considered to be a colossal sales failure that’s shortcomings are widely attributed to Nintendo spending too much money trying to market it to ultimately smaller audiences, the game being released at the end of the N64’s run, and the fact that retailer blowback may have limited the title’s availability in some markets.

Shortly after Conker’s Bad Fur Day‘s release (September 2002, to be exact), Rare was acquired by Microsoft. Just as the “fall” of Rare is typically traced back to this moment, the downfall of Conker’s Bad Fur Day‘s sequel is usually blamed on the simple idea that Microsoft killed the concept. To be fair, it’s certainly been strongly suggested that the company just wasn’t that interested in a sequel. At least not as interested as the most adamant fans are.

However, there are a couple of things about that explanation that just don’t add up. First off, Microsoft was clearly interested enough in the Conker property to allow Rare to develop a fairly substantial remake of the original game and release it in 2005 on Xbox as Conker: Live & Reloaded. Again, reports indicate that the remake underperformed in terms of sales, but it was still one of the earliest projects Rare worked on for Microsoft, which would tend to indicate they were open to the idea of the franchise continuing in some way.

Furthermore, it seems that quite a bit of work did go into a Conker’s Bad Fur Day sequel at some point. Former Rare designer Chris Seavor once tweeted artwork, plot details, and other concepts all related to a Conker’s Bad Fur Day sequel known as Conker’s Other Bad Day. The game, which would have picked up roughly where the first left off, would have seemingly followed a similar gameplay structure to the original title but would have expanded the series’ mythology tremendously. The sequel’s early story moments would have even “killed” Conker only to resurrect the Panther King and have him take over a Conker doppelganger. Everything we’ve ever heard about this sequel suggests that it would have been absolutely wild.

While that would hardly be the first time that a studio worked on a game that was never released, when you look at all the materials and all of the details that the team had seemingly once concocted in preparation of a sequel, you start to get the feeling that it was more than just optimism that inspired them to start work on the game. Surely they must have had a conversation with Microsoft about getting that sequel made, right?

Actually, they apparently did. In fact, in an interview with Eurogamer, Seavor talked about some of the work that went into that sequel. Here’s what he had to say about the project:

“I started designing it and we were going to do it. They just wanted it quickly. It was coming to the end of the life cycle of the Xbox, and there was talk of them going, look, can we just shift this over to the 360, which was a year away? I was really against that because I just couldn’t face spending another two years on a game we’d already spent a year and a half on. So I guess it was probably my fault. Now, I would have gone, absolutely.”

Interestingly, Seavor also says that even he’s “not sure” how Live & Reloaded happened and suggests that the company should have just made a sequel instead of the remake at that time.

Still, that comment suggests that the real reason we never got a proper Conker’s Bad Fur Day sequel may have more to do with the fact that such a sequel was once again caught between gaming generations and Rare/Microsoft ultimately decided to focus on other things rather than release it for the old console or seriously rework it for a new one. Other factors were seemingly in play, but it sounds like there was a chance we could have gotten a Conker sequel for Xbox if a few things played out slightly differently.

Sadly, that’s not exactly the end of this story. After all, in 2015, we did get a Conker sequel…ummm…of sorts called Conker’s Big Reunion. It was developed by Team Dakota for Microsoft’s ill-fated Project Spark (remember that?) and released as the first episode in what was supposed to be a series of paid DLC stories. However, when Project Spark went free-to-play and all plans for future paid DLC were canceled, Team Dakota abandoned the idea of releasing additional episodic Conker adventures.

Still, in its own way, Big Reunion does show some of the other reasons why a Conker’s Bad Fur Day sequel would be incredibly difficult to pull off today. While Big Reunion‘s small size, technical problems, and general lack of ambition relative to the original game certainly hurt its reputation, the bigger problem was that the game wasn’t very funny and its once novel concepts felt played out in a more modern era of gaming. If Conker’s Bad Fur Day were to live on in the modern age, it would likely have to be as a reboot that reimagines how the original game’s best ideas would look today.

At least the original will live on as not only a creative and generally fun game but a reminder of a very specific time and one of console gaming’s strangest major releases.