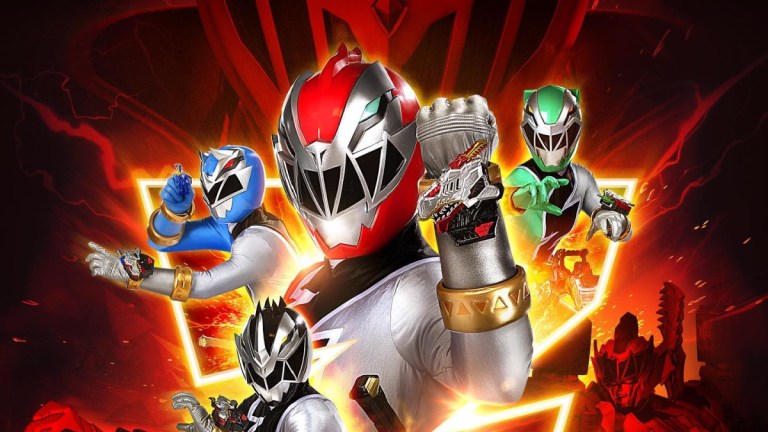 For years Power Rangers basically had one continuity. Sure it was a little wonky and things didn’t quite all fit together but all the seasons basically took place in one universe.

Dino Fury executive producer Simon Bennett stated in an interview with CNET that the show is in the “main universe” but what the main universe IS in Power Rangers isn’t quite clear at times. After watching the premiere it may still be a bit confusing so we looked for clues to determine exactly where to place Dino Fury in Power Rangers’ messy continuity.

The first clue comes after Ollie and Amelia morph. After they battle for a bit Amelia wonders what other powers they might get to which Ollie responds, “If you watch the news? Zords!”

This line places the show in a universe where other teams of Rangers already exist. We aren’t sure how many but both Ollie and Amelia automatically assumed they were both Power Rangers after morphing, so it seems knowledge of Rangers is fairly widespread.

The second, and biggest clue comes when Zayto recalls the origin of the Dino Fury powers. He tells of coming to Earth 65 million years ago to stop the Sporix. There he and his fellow knights were overwhelmed until the legendary Morphin Masters appeared and used the power of the Morphin Grid to bond the knights to the spirits of dinosaurs.

This a HUGE reference to past events in the series’ history so parsing it out will help us try to figure out what this means for Dino Fury’s place in continuity. The Morphin Masters (or Morphing Masters, depending on who’s saying it) originally appeared in the seventh episode of Mighty Morphin Power Rangers, “Big Sisters.” There the Morphin Masters were given the very vague description of being “ancient sorcerers” who had the ability hide a “universe of power within two mystic power eggs.”

This should place Dino Fury in the main universe then, right? The Morphin Masters in the Dino Fury premiere had “untold power” so that lines up with being able to wield a universe worth of power… right?

Not necessarily. The Morphin Masters have also been a key element of the Boom Power Rangers comics. In the comics’ Shattered Grid storyline it was specifically stated that, “The Masters cannot involve themselves in the affairs of man. They feel strongly that it is not their place to determine the fate of worlds or existence, for that matter. That choice belongs to its people.”

(It was also stated in the Beyond the Grid comic storyline that the Morphin Masters oversee ALL Power Rangers realities but with their difference in appearance and the comic’s version of the MMPR team not matching the TV show we’re still going to say the Masters seen in Dino Fury are different. The comic’s continuity v. the TV show is a whole other conversation!)

The Masters in Dino Fury seem closer to what little we learned about them in the TV series, since there they interacted with Earth more than the Morphin Masters of the comic ever have. So with that appearance on TV being in the original MMPR, which is a part of the main universe, we can safely confirm what Bennett stated. Yes, Dino Fury is in the main universe.

Obviously Power Rangers continuity is flexible and whether this seasons stays in the main universe could be changed as the show goes on. Maybe they’ll pull a Dino Charge at the end and shunt it into another universe. Maybe something will come up that openly contradicts a past season and it’ll have to be squared away later. We’ll have to see but for now, it looks like fans won’t have to worry about yet another universe being added to Power Rangers‘ tangled continuity.