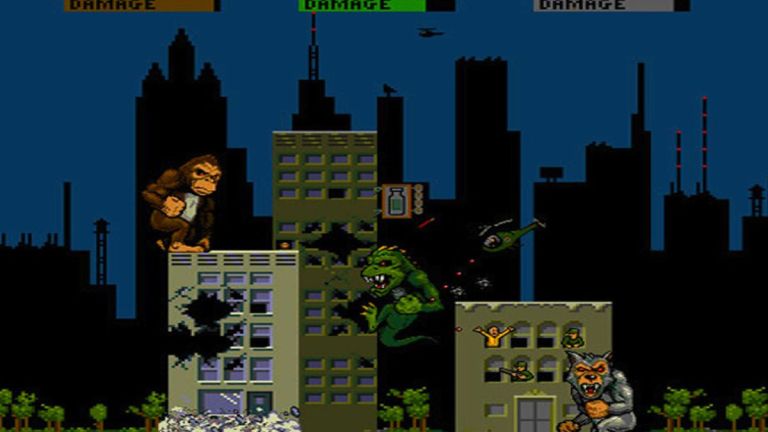 If the release of Godzilla vs. Kong has you feeling nostalgic for the golden age of giant monsters, you’re not alone. There was a time when it felt like giant monsters ruled TVs and theater screens everywhere. They were even prominently featured in one of the most beloved arcade games of the 1980s: 1986’s “smash-em-up” Rampage.

Actually, there were quite a few years after Rampage‘s release when it remained one of the best ways to live out your giant monster fantasies. Later games would more fully realize the “destroy everything” philosophy that Rampage was built on, but it took a long time for another game to come close to matching (must less surpassing) Rampage‘s simple and satisfying gameplay. For years, it was the best way to let gamers play as Godzilla, King Kong, and even The Wolfman (despite the fact the games didn’t use those names).

But what if I told you that all of those years we spent pretending that Rampage‘s characters were based on some of the most famous monsters in movie history may have been based on a lie? Were two of Rampage‘s main characters really based on the leads of Godzilla vs. Kong? The answer is more complicated than you probably thought…

Yes, Rampage’s George is Based On King Kong

This one probably won’t come as a surprise to anyone, but Rampage’s iconic giant monkey (we know him more fondly as George) is indeed based on King Kong.

“I’m a huge fan of Harryhausen and Willis O’Brien so I made George an ape,” says Rampage designer Brian Colin on the inspiration for the character.

While it seems simple enough to suspect that King Kong was the inspiration for a giant ape wreaking havoc on a city, we’re about to discover that such assumptions are not as simple as they seem. Besides, George isn’t exactly a 1:1 copy of King Kong. Their physical differences are slightly different and George even has an origin story that suggests he was turned into a monster as the result of an experiment with a vitamin gone wrong.

One other interesting thing to note is that the version of George seen in the Rampage movie looks noticeably different than the character’s big-screen inspiration. Well, it turns out that there’s a pretty simple reason for the change.

“We just wanted to separate ourselves from every other monster movie that had ever used a gorilla, King Kong obviously,” said Brad Peyton of the character’s design while also noting that they made him a rare albino gorilla to help explain why The Rock’s character may have felt more of a need to protect him while he was young.

Still, it’s fair to say that those times you imagined you were King Kong when you were playing Rampage were not in vain as the game’s creators were apparently dreaming of the same thing.

Lizzie Isn’t Based On Godzilla but Another Giant Lizard…

While it’s difficult to buy into the idea that Rampage’s Lizzie isn’t actually based on Godzilla given that Godzilla is on the first ballot of any monster Hall of Fame ceremony, Brian Colin has previously revealed that the character was actually inspired by the design of the creature Ymir from the comparatively obscure 1957 Ray Harryhausen monster film, 20 Million Miles to Earth.

It probably sounds wild to think that a giant lizard in a monster game could possibly be a nod to anything but Godzilla, but as you can see in the comparison shot above, it’s hard to deny the design similarities between Ymir and Lizzie.

According to Colin, the decision to base Lizzie more on Ymir than Godzilla can partially be attributed to the logistical issues presented by portraying Godzilla and Kong as physically similar characters in a video game.

“Lizzie had to be a lizard, but she had to fit the same frame and size as George,” says Colin. “There’s no way Godzilla could fit inside that frame! Godzilla smashes buildings but Godzilla, ya know, has an ass the size of Boston! We couldn’t do Godzilla in that game even if we wanted to.”

Considering that some have already pointed out that Godzilla vs. King Kong hardly feels like a fair fight on the basis of their size difference alone, Colin may have been on to something there.

While this may break some people’s hearts, Colin has also reportedly stated that he was “not a Godzilla fan or a kaiju fan,” which probably made it that much easier to pass up the opportunity to make a game that unofficially stars the legendary monster. Of course, nothing is preventing you from pretending Lizzie is Godzilla as you likely already have been during these years of blissful ignorance.

Ok, a giant monkey and a giant lizard are obvious enough candidates for a trio of monsters, but what about Ralph? Who is he based on?

The answer to that question is kind of strange, but the first thing you need to know about Ralph is that he’s in Rampage due to some technical shortcomings that required the team to reuse some assets.

“Ralph is Ralph because he’s just George with the head swapped out and a different color palette. That way we could squeeze three monsters into the game without using three times the sprites,” Colin has previously explained.

Well, that makes sense, but why is he a wolf? Some have speculated it’s because Rampage was supposed to be a Universal Studios monster game at some point and that Ralph was going to be based on the Wolfman. However, Colin has previously said that rumor is “hogwash.”

Still, it’s highly likely that the decision to use a wolf as the final creature was at least partially inspired by Colin’s love of classic monster movies and the designs of those creatures. Future Rampage games even make subtle jokes that reference classic werewolf horror films. Besides, there are few giant monster movies that actually star werewolves.

Interestingly enough, the only giant monster movie I could find starring a werewolf was the 1983 “fan film” Legendary Giant Beast Wolfman vs. Godzilla (aka Godzilla vs The Wolf Man). While it seems impossible that anyone on the Rampage team was even aware of that film’s existence, it’s interesting to note the design of Ralph is somewhat similar to the design of the wolf in that movie and that it and Rampage seemingly marked the first time anyone showcased a giant wolf and a large lizard on the same screen.