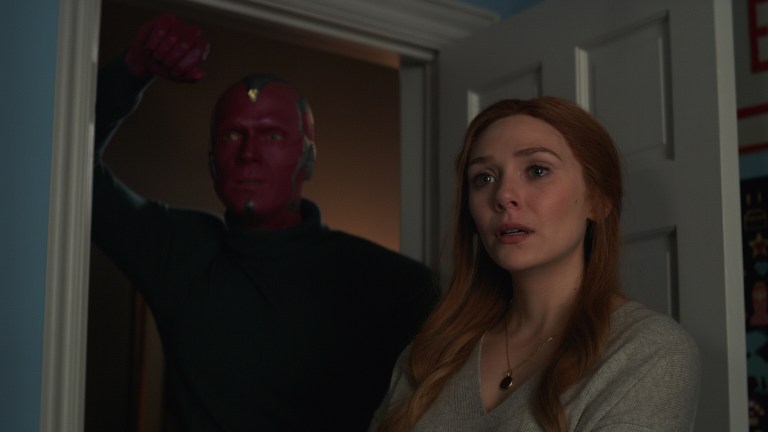 After eight near-perfect episodes, the story of WandaVision has concluded with a finale installment that sticks the landing on all fronts, including multiple cinematic battles, several heartfelt goodbyes, and a long-overdue moment of agency for a heroine who has so often been denied a choice in her own future.

But while “The Series Finale” is a deeply satisfying coda to what is probably Marvel’s most emotionally gratifying outing to date, it leaves us with more than a few questions about where these characters go from here. Let’s break down what happened in the WandaVision finale, and what it might mean for the Marvel Cinematic Universe going forward.

Wanda Transforms Into the Scarlet Witch

Thanks to Agatha’s pronouncement last week, we already knew that Wanda was the legendary Scarlet Witch but in “The Series Finale” we see her fully embrace her chaos magic, right down to an amazing contemporary riff on her traditional comics costume. (That headpiece! The cape! We love to see it!)

There’s even a return of the mind control visions we saw her deploy to such great effect in Avengers: Age of Ultron. What can’t this Wanda do?

Granted, we still don’t know what all this power now means for her character in a larger sense, but to be fair, neither does she. Wanda’s abilities as displayed in this episode are fairly tremendous, as she uses witch runes to neutralize Agatha, wipes her mind, and brings down the Hex she’s built around Westview, freeing its residents.

In the episode’s post-credits scene, however, her abilities appear to have grown even further, as she’s able to take in a scenic lake view even as her astral self is also busy reading the Darkhold, right down to making its pages turn on their own.

This is a move we’ve seen Stephen Strange pull before, but according to Agatha, Wanda is even more powerful than the Sorcerer Supreme. So….what else will she be able to do? That seems to be what she’s trying to find out.

Westview Returns to Normal (Sort of)

During her (quite frankly pretty badass) battle with Agatha, the older witch frees several Westview residents from Wanda’s mind control, forcing her to face what she’s done to the townspeople in her quest to build a perfect life. The simultaneously angry and desperate crowd of Westview residents – who look like nothing so much as a suburban take on a horde from The Walking Dead – confront Wanda and reveal a bit of what it must really be like as a person who lives under the town’s spell.

The most harrowing victim is certainly town queen bee Dottie, who comes to herself long enough to beg Wanda to allow her to see her daughter, or perhaps write her into the larger storyline as one of the twins’ friends. But we also learn that Wanda has been projecting her grief and pain into Westview’s nightmares, forcing them to suffer right alongside her, rather than providing a peaceful, perfect escape.

What Happened to Agatha Harkness?

At least one resident of Westview won’t be returning to normal, however. After Wanda defeats Agatha by scattering witch runes around the Westview Hex to neutralize her magic, she uses her own power to wipe Agatha’s memories and essentially turn her into nosy neighbor Agnes, the WandaVision “role she chose,” for good.

Your mileage may vary on whether this is an acceptable ending for Agatha – a character who was, admittedly, often monstrous, even though she was right about the way that society is all too willing, even eager, to vilify powerful women out of fear (and often just because it can). On the plus side, since nothing lasts forever in the Marvel Universe and Agatha Harkness is a pretty powerful witch in her own right, there’s every chance this character will reappear down the road. After all, Agatha was Wanda’s mentor in the comics and she tells Wanda here that her magical expertise will be needed in the future.

We Said Goodbye to Wanda’s Kids (Or Did We?)

As products of the Hex, young Billy and Tommy Maximoff’s fates were always going to be tied to it, so in choosing to break the illusion, Wanda also accepts that she’ll have to say goodbye to her sons. In one of “The Series Finale’s” most heartbreaking scenes, she and Vision, knowing what’s coming, tuck the boys in for bed one last time, as the red glow of the shrinking boundary line edges closer to their house.

Wanda also thanks the boys for choosing her as a mother. Reader, I cried. Plus, this basically confirms that Billy and Tommy aren’t entirely constructs of Wanda’s imagination. They’ve come from somewhere, and possess something like souls. How that all happened is anyone’s guess – here’s your entry point for Mephisto, folks! – and it’s something future series can explore, but it’s certainly the way I’d prefer to read it.

But, since the last thing we hear on WandaVision is also the voices of Tommy and Billy shouting to their mother that something is wrong, it seems pretty likely we’ll see some version of these characters again. There’s precedent in the comics after all, and finding her lost boys is a pretty powerful narrative throughline to carry over to Doctor Strange in the Multiverse of Madness.

What Happened to White Vision?

Paul Bettany’s dreams of essentially working with himself are realized, as Vision and the White Vision come to blows in the skies of Westview. But despite the epic battle between the synthezoids – or, synthezoid and Mind Stone-fueled recreation of that same original, as the case may be – physical combat isn’t the most compelling, or even interesting part of their encounter.

Instead, it’s philosophy. Yes, you read that right. Upon realizing that the two are too evenly matched for either to emerge victorious, Vision decides to engage the White Vision in a thought experiment about their shared existence, and whether either of them is truly the man (robot?) they claim to be. The two end up in a sort of pseudo-philosopher’s debate about The Ship of Theseus, a thought experiment centered on issues of identity and meaning, and what makes a thing real.

This is surprisingly deep stuff for a Marvel property but the conversation contains tantalizing hints about what we could expect as we head into Phase 4 of the MCU. After all, it will likely contain stories full of magic, mutants, and transformation of all types; this is simply WandaVision giving us a metaphorical anchor to hang onto throughout. Well, that and providing a way to bring Vision – or some version of him – back for good, as Westview Vision restores White Vision’s memories and gives us all a reason to hope that he and Wanda will one day be reunited again.

Was the Vision in Westview Real?

Yes and no. The Vision that lived in Westview and shared a house with Wanda wasn’t physically the Vision we’d previously seen in the Avengers films. He was a flesh and blood construct, created by Wanda’s power, informed by her grief memories, and born from the piece of the Mind Stone that lives inside her. (This makes sense, given that the rise of Wanda’s magical abilities was connected to her initial exposure to the Mind Stone. As Agatha puts it, the Scarlet Witch is forged, not born, and for Wanda, that crucible was her time with Hydra and the Infinity Stone that served as a sort of cosmic gasoline on her sleeping abilities that might never have stirred otherwise.) This Vision represents Wanda’s hope and sadness, but mostly her love.

And, as a result, even Westview Vision doesn’t greet his oncoming demise with sadness, or even fear. Instead, he reasons, he and Wanda have been here before twice already, forced to say goodbye before their time. And since their relationship has survived before, there’s every reason to believe it will again, and they’ll find their way back to one another.

Unfortunately, thanks to everything else going on in “The Series Finale,” Monica Rambeau doesn’t have a ton to do here. However, she does get a straight-up hero moment, where she throws herself in front of a bullet (or four) for Wanda’s kids and reveals a heretofore unseen ability to phase through objects and slow them down. She also frees the real Ralph Bohner, and happily helps send dirtbag SWORD director Tyler Hayward to prison.

Happily, however, despite her limited screentime in this episode, Monica’s MCU future looks bright. In the mid-credits scene, she’s approached by a Skrull disguised as a SWORD agent who takes her aside and reveals she was sent by a friend of her late mother, Maria’s. And that friend, who is most likely Nick Fury, would like to see Monica – in space.

We’d all basically assumed that Monica, who is Maria’s daughter and clearly has some as-yet-unprocessed resentment toward Carol Danvers, would be a significant player in the upcoming sequel Captain Marvel 2, but perhaps there’s an even broader future in store for her, as part of the SWORD-like organization Fury and the Skrull named Talos formed at the end of Spider-Man: Far From Home.

Who Was the Fake Pietro Maximoff?

Sadly, the character played by Evan Peters in WandaVision was not actually Wanda’s brother Pietro ported over from the Fox X-Men universe like we all hoped. So yeah, unfortunately, that means mutants technically still do not exist in the MCU, and that’s a problem another movie or series will have to address.

While trapped in his self-described “man cave”, Monica discovers that the Fake Pietro is really just Ralph Bohner, the mysteriously absent husband Agnes was constantly complaining about throughout the season. Agatha kept him under her spell using an enchanted necklace, and when it was removed his real identity returns. Whether the fact that Agatha’s punishment to live as her Agnes identity involves being really married to Ralph is unclear but in Westview, anything is possible, I guess.

Wanda has long been confirmed as a major player in the upcoming sequel Doctor Strange in the Multiverse of Madness, but we haven’t known how exactly she would fit into this story, having never exactly met Stephen Strange before. But since the WandaVision post-credits scene confirms that the new Scarlet Witch is determined to learn more about her powers, it seems that will change fairly quickly. The only question is how?

Stephen Strange has served as a mentor to many magic users throughout Marvel Comics history and could certainly be someone that Wanda seeks out to help her access and control her new abilities. But given that she’s also currently DIY-ing her knowledge of witch history with a magical item that is basically subtitled the “book of the damned,” it’s also very possible that she and Strange will end up at odds over the Darkhold’s existence, her possession of it, or both. Plus, there’s that interesting wrinkle of her still hearing the voices of her construct children that shouldn’t still exist outside of Westview thing. Time to explore the multiverse, anyone?