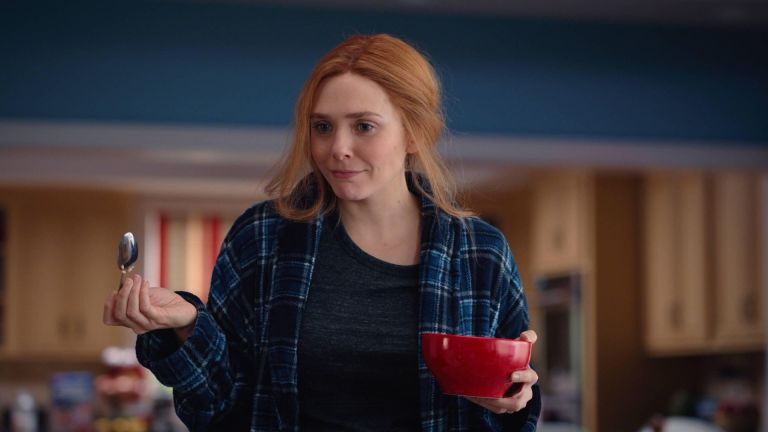 WandaVision episode 7 finally gives us a post-credits scene. Yes, the tried and true MCU tradition has finally made its way to one of the Marvel Studios Disney+ shows. Sure, you could probably argue that the fact that the first few episodes had “sitcom credits” before the actual credits rolled was kind of a meta-joke about the credits themselves being the post-credits scenes on this show (and I’m not entirely sure that wasn’t intentional), but in terms of an actual stinger or tease for future episodes? Nothing until now.

But the thing is, this isn’t a “big reveal” so much as it is a shocking tease of more mysteries that await. Here’s what we think that WandaVision episode 7 mid-credits scene means.

What’s in the Basement?

After her confrontation with Wanda Maximoff, Monica Rambeau (and how cool is it that we basically just had a Spectrum/Scarlet Witch showdown in the MCU?) is poking around Agatha’s house (that’s number 2804, two doors down from Wanda and Vision who live at 2800). She opens the door to the basement and spots some apparently magical vegetation.

We’re not entirely sure what that vegetation is. Could it be an offshoot of the mystical Wundergore Everbloom from the comics? Is it something that’s feeding off both Wanda and Agatha’s magical energy? Could it be a representation of the true villain of the show (assuming, of course that the big “it was Agatha all along” reveal is misdirection…which we think it is)? We’re currently trying to think of any other Marvel villains with a fondness for both purple and horticulture.

Monica is interrupted by “Pietro Maximoff,” played by Evan Peters. Here, Uncle Peter looks like he’s on his way to a Phish concert or something, and speaks in a menacing drawl “snoopers gonna snoop.”

It’s so menacing that it lends credence to what Wanda told Billy and Tommy earlier in the episode: that this isn’t actually their uncle. So we’re once again back to asking, if Peters isn’t playing a “recast Pietro,” then just who the hell is he supposed to be, anyway?

Who is Evan Peters Really Playing?

Is he just a magical minion of Agatha’s? A bystander being manipulated by her magic just as surely as Wanda is manipulating the other citizens of Westview? He does give off “actual horror movie villain’s creepy groundskeeper” vibes here.

Since he was first introduced, fans have wondered if Peters’ mysterious “Pietro” was in fact a much more powerful force masquerading as Wanda’s dead brother. In particular, Mephisto comes to mind. Although we have some other ideas about who the big bad might actually be, as well.

Perhaps there’s an outside chance that if he’s just being manipulated, maybe there really is nothing sinister about this Pietro, and whatever creepy action he seems like he’s about to take here is just an unfortunate misunderstanding. Maybe he really IS the Pietro from another corner of the multiverse (we still can’t entirely rule that out) and this is just yet one more piece of expert misdirection on the part of the show. For that matter, maybe that air of menace present here is just one more expert piece of Marvel misdirection.

After all, if he wasn’t important, it seems unlikely that they wouldn’t have made him such an important part of the first post-credits scene the show has done.