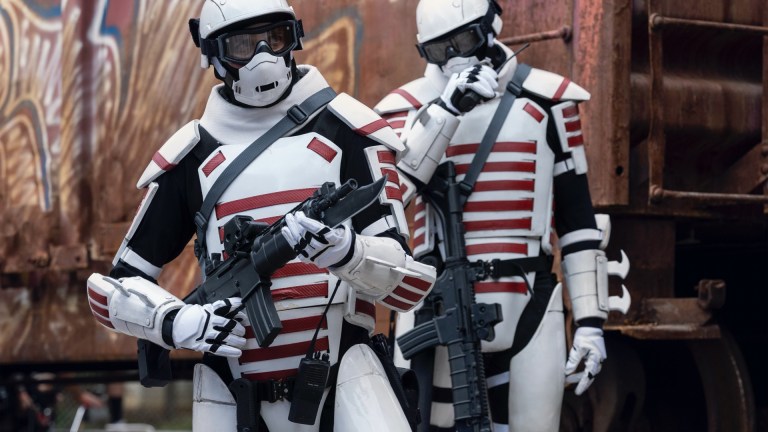 This article contains spoilers for The Walking Dead comic.

The Walking Dead season 11 does not yet have a release date, and may be many months away. A silly little detail like the immovable nature of time is not going to stop AMC from teasing its arrival, however.

Shortly after The Walking Dead season 10 episode 20 premiered, AMC provided a brief teaser for the show’s 11th and final season. Though it’s only 10 seconds long, the clip does indicate a pretty shocking new direction for the show’s final arc. Give it a look below to see what we mean.

What we appear to be looking at here is a dilapidated subway station with some graffiti including a peace sign and a very strongly-worded letter to God (more on that in a minute). This, of course, raises the question: Didn’t the world, and all the convenient amenities within it, end at the very beginning of The Walking Dead? How can we be not only looking at an underground train stop, but also hearing the telltale sounds of a train in the distance?

Well it’s entirely possible that The Walking Dead’s final season will be featuring a significant technological level-up, and may even take place in a more urban environment. To understand how, we must look to the original comics from Robert Kirkman once again. The final arc of The Walking Dead comic takes place in a community known as The Commonwealth.

This is the community that Eugene discovers via a radio chat with Stephanie and it’s almost certainly the community that the show’s version of Eugene, Yumiko, Ezekiel, and Princess find themselves in now. You can tell by the extremely comic faithful armor that the soldiers wear in this week’s most recent episode.

In terms of society-building, The Commonwealth is way ahead of Alexandria, The Kingdom, Hilltop, The Sanctuary, Oceanside, or anywhere else we’ve seen thus far. The Commonwealth is determined to recreate the world the way it was before and they have pretty much succeeded in that mission. The Commonwealth has 50,000 citizens and a thriving economy that includes restaurants, a legal system, and even a baseball league.

One thing it is not revealed to have, however, is a subway system. Eugene eventually refurbishes a train to connect the Virginia-based communities with the Commonwealth but there is not an underground subway system that we’re aware of. Still, a subway station and working trains seems like a nice creative flourish from Walking Dead showrunner Angela Kang to surprise and delight comic readers and exclusively show-watchers alike.

Of course, this teaser could be entirely metaphorical and meant to suggest that season 11 will take place in a more urban environment without a literal subway system. According to the show’s Stephanie, her community is in West Virginia (it’s in Ohio in the comics). And no disrespect to the state of West Virginia, but it absolutely does not have any underground subway stations to refurbish. Maybe the Commonwealth built one from whole cloth. It’s more likely, however, that this teaser is intended to establish urban vibes or that the plot will make a pitstop in another major city at some point. Either way, the teaser sets an interesting new tone for this final season.

Now back to that very evocative graffiti. It reads “if there is a God, he will have to beg for my forgiveness.” The Walking Dead often likes to highlight its characters rage against the almighty, and who could blame them? The survivors left over from the zombie apocalypse have many reasons to be furious at their creator. Like the subway station it’s drawn upon, this graffiti is a real mood-setter. It’s origins, however, are curious.

If that phrase sounds familiar, it’s probably because it pops up on the Internet periodically – usually on Reddit. According to a handful of sources, that phrase was etched into the wall of the Mauthausen concentration camp in Austria, presumably by a Jewish prisoner during the Holocaust. Scholarly confirmation of this is elusive, but based on a preponderance of anecdotal evidence, it does seem that that phrase, or something like it exists on the walls of Mauthausen.

If the phrase’s origin are authentic, The Walking Dead’s decision to include it in the teaser for its final season is…a choice. The show could be trying to suggest here that the threats faced in the end will be more human than ever. Still, as a general rule of thumb, it’s best to stay away from Holocaust comparisons whenever possible.