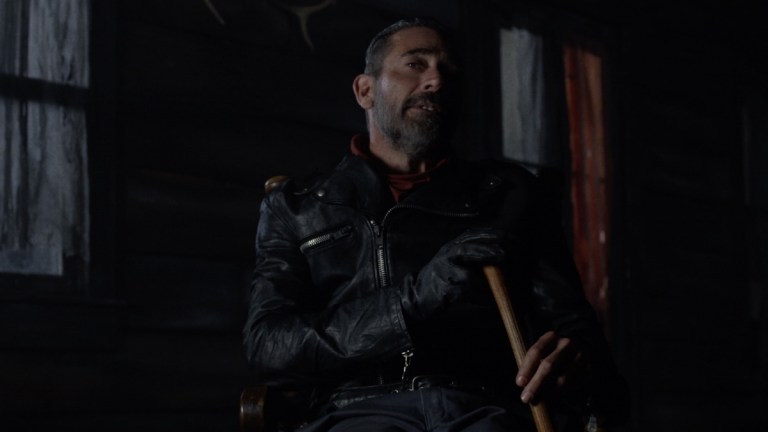 There are plenty of Walking Dead characters who could lay claim to Negan as their arch enemy. Rick, Michonne, and Maggie are just a few of many individuals who have one hell of an axe to grind against the show’s most imposing villain.

From Negan’s perspective, however, there’s only one person powerful enough to be his nemesis: himself. In an exclusive new clip from The Walking Dead season 10 finale, “Here’s Negan,” the show presents this self-hating dynamic in a surprisingly literal fashion. Give it a look below.

In a rather cozy-seeming cabin, we see the classic “All Out War” era version of Negan stomping Lucille on the ground.

But it’s not the gates of Alexandria that Negan is demanding to be let into but rather the real Negan’s own psyche. This Negan is but a shade of Negan’s past. The hallmarks are undeniable: black leather jacket, red scarf, slicked back hair, and a devilish grin. The Negan who has matured over the past several years, first in captivity in Alexandria, and then on his feet in a war against the Whisperers, can only sit quietly in front of the fire trying to ignore him.

What we appear to be seeing here is only the beginning of Negan’s introspection. The former Negan’s dialogue reveals that the one-time Savior has been banished from polite society and sent to a remote cottage for his crimes. And lest we forget, those crimes were numerous – up to and including bashing in the brains of Glenn (whose actor Steven Yeun now has an Oscar nomination, so the crime is twice as bad).

Old Negan taunts current Negan, saying: “The sad part isn’t that we ended up here because, let’s face it, it could have been a hell of a lot worse. The sad part is that you thought for even a second that those folks would see you for anything but who you truly are. Which is me.”

Wait, no, that isn’t the cool thing. Sorry. It’s what he says next that rules: “A cult of personality with no cult.”

There we go! Got his ass. How will Fake Negan respond to this devastating burn? Guess we’ll find this Sunday.

Based on a Walking Dead comic miniseries of the same name, “Here’s Negan” is set to dive into the iconic villain’s history and try to find the humanity within him…if such a thing even exists. The synopsis for the episodes reads:

“Carol takes Negan on a journey, hoping to minimize the increasing tension. Negan reflects on the events that led him to this point and comes to a conclusion about his future.”