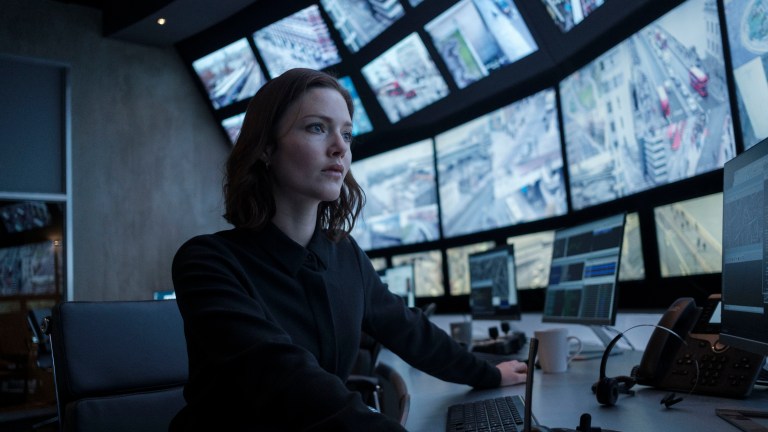 The Capture is fundamentally a show about screens. Screens are the first things viewers see as the series heads behind the scenes at a CCTV control center where workers remotely take in something horrific happening on the streets of London.

Those same CCTV cameras and the screens they broadcast to are ever-present throughout the show’s six episodes, which tell the story of U.K. Special Forces Lance Corporal Shaun Emery (Callum Turner) who was failed by video surveillance technology once before and may be on the verge of being failed by it once again. The Capture wrapped up its compelling run in October of last year on BBC One. Now it’s set to thrill American audiences when it is included with new NBCUniversal streaming service Peacock at launch.

DEN OF GEEK: Which TV show have you never seen that everyone keeps nagging you to watch?

CALLUM TURNER: Can I say what I have just seen? I just watched The Sopranos after years and years of people telling me to.

HOLLIDAY GRAINGER: I haven’t watched The Sopranos. I tried to watch it after watching The Wire and unfortunately it felt really, really soapy. I’ve never watched Green Wing and everyone really goes on about that.

Which TV show would you bring back from the dead if you could?

CT: I wanna say The Office – the U.K. version. But I know that Ricky Gervais only ever wanted two seasons. So I don’t want to go against his wishes.

Which TV show do you wish more people would watch?

HG: One of my favorite shows that I feel not enough people have heard of is Better Things. It’s so good. It’s so funny and it’s so real. It makes me cry and laugh at the same time. I just get through the seasons far too fast.

Which TV show has given you nightmares?

LAURA HADDOCK: Some Black Mirror episodes have given me nightmares. You don’t want to go to sleep. I would really appreciate it if all my friends could come around right now and have a sleepover, because I’m going to stay awake until 5:00 A.M. then try and grab an hour.

When did you last cry watching television?

LH: I watched 13th and I cried my eyes out the other day.

When did you last laugh out loud watching television?

LH: I’ve been watching Dead to Me and some of Christina Applegate’s little side notes that she does are just hilarious, and I was laughing out loud at some of those.

What or who was your first TV love?

BM: Wow! Instantly, into my mind jumps (Catherine) Bach as Daisy Duke in The Dukes of Hazzard. I think she would be a tough one to knock off the top.

LH: So, my first love, as in, “Oh, I want to be her,” was Hayley Mills in Pollyanna, playing Pollyanna. I just adored her and looked up to her.

CT: I used to love this show called Brum when I was a kid. It was about a car. That was my favorite. That was my first TV love. It was a car that would drive and save people.

HG: I guess when I was a kid, my favorite TV show was Rupert the Bear. There was this one character in it and I just couldn’t stop watching that. It was like that episode I watched on repeat. He was called Raggety, and he was made out sticks and he was a nymph of the spring. He was kind of like Gollum-y character. I found him totally fascinating.

The Capture will be available to stream on Peacock on Wednesday, July 15.