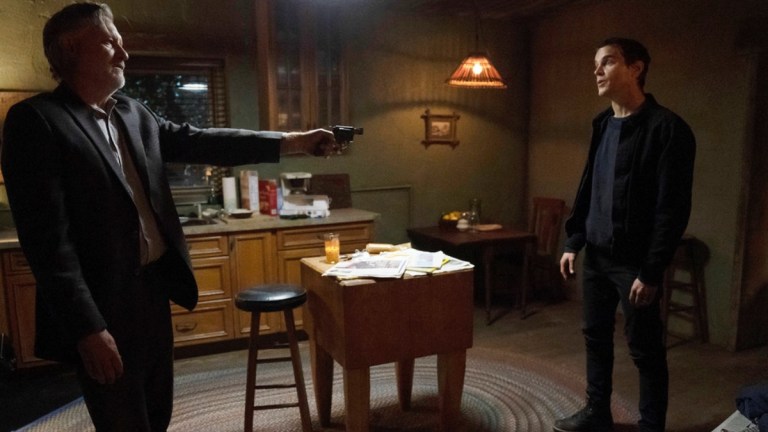 This article contains spoilers for The Sinner season 3.

When planned miniseries decide to expand into traditional series, they often run the risk of rendering their titles moot. Such is the case with USA Network’s detective drama The Sinner. When it opted to move past its novel inspiration’s premise to tell new stories about detective Harry Ambrose, there was a real chance that the name “The Sinner” would become vestigial.

The Sinner solved this problem by making sure that all its subsequent case subjects would be as focused on sin as season 1’s Cora Tannetti (Jessica Biel). In fact, the lead character of The Sinner season 3, Jamie, might be the series’ biggest “sinner” thus far.

As effectively played by Matt Bomer, Jamie is the ultimate example of what happens when college classes on Nietzsche go wrong. In The Sinner season 3’s first episode, Jamie is a seemingly normal (if unusually hot) individual. He’s a teacher at a prestigious prep school, and a husband with his first child on the way. But when old college buddy Nick Haas (Chris Messina) drops by for dinner, it unlocks something primal and terrifying deep within him.

The Sinner season 3 (streaming on Netflix now) doesn’t hold back what’s driving Jamie until the end of its season. In fact, early episodes are surprisingly forthcoming about the nature of Jamie’s transformation. Back in college, Jamie and Nick were essentially edgelords – weird, dark brats who became fixated on philosophies of the self. From Aleister Crowley to Frederick Nietzsche, Jamie and Nick are enraptured by intellectual theories that assure that God is dead, and the only meaning in the world is what you make of it.

Throughout their lives, these philosophies encourage the pair to engage in risk-seeking behavior that ranges from jumping off of bridges to burying themselves alive to stabbing themselves through the hand in public. Nick’s latest plan is to murder local artist Sonya Barzel (Jessica Hecht). A fatal car accident that kills Nick foils this plan. But the experience of watching Nick die encourages Jamie to take his death obsession to the extreme.

By the season 3 finale, Jamie’s body count has reached three with him having directly or indirectly killed Nick, a fortune-teller at a trendy Manhattan party, and detective Harry Ambrose’s precinct captain. This all leads to an expected final confrontation with Harry. This denouement is fairly perfunctory. In fact, much of The Sinner season 3 suffers from having too much time to tell its story. Jamie is constantly coming into Harry’s orbit, telling “you’re not so different, you and I”, then running away. This last meeting, however, is tremendously meaningful and deftly communicates the theme of season 3.

After a very silly game of murderous fortune-teller, Jamie tells Harry that he just wanted to force him to admit that they’re the same. There’s plenty of evidence throughout the season that Harry and Jamie have similar philosophical leanings – or at least some similar nihilism. Harry then seemingly confirms that by shooting Jamie in the gut. And this is where things get interesting.

Instead of maintaining his Nietzsche-ian energy, congratulating Harry on a job well done of becoming a murderer, Jamie begins to fall apart. He cries like a child, and begs Harry to help him. As Harry kneels down to tend to his wound, Jamie asks Harry over and over again if the ambulance is on the way. Despite talking a big game about the emptiness inside him and the inability to feel any god’s presence, Jamie clings to life in an almost embarrassing fashion.

When Jamie finally dies, Harry is clearly rattled from the experience.

“What was he like in the end?” Sonya wants to know.

Sonya had been enraptured by Jamie’s killer aura, all but inviting him into her house on two occasions despite knowing the dangers he presented. She is clearly expecting him to have had some sort of revelation in the end…something that would have explained why he was so mysterious and appealing. But Harry can only respond with the truth.

“Scared,” he says, before beginning to weep.

Harry weeps because he too is scared. Harry thought he found a compatible spirit in Jamie. Both feel an absence of God (or any other greater meaning) in their lives. For Harry it was likely because of the horrors in the capacity of his job. For Jamie, it was just because he took Philosophy 101 a little too seriously during undergrad. But regardless of the reasoning, both men felt a deep dissatisfaction and emptiness that only something extreme could fix.

In the end, however, killing didn’t “fix” Jamie. Nor did dying. The only thing that dying revealed to Jamie was that he was afraid to die. The thing that motivates Harry Ambrose and the subjects of The Sinner isn’t malice, dissatisfaction, or sin, itself. It’s just simply fear. The Sinner season 3 is just like the show’s other two seasons, and really just about any other detective drama. It’s all about fear of the unknown. Jamie didn’t realize that until too late. Hopefully, Harry can carry that lesson onto the next case.

The Sinner is available to stream now on Netflix.