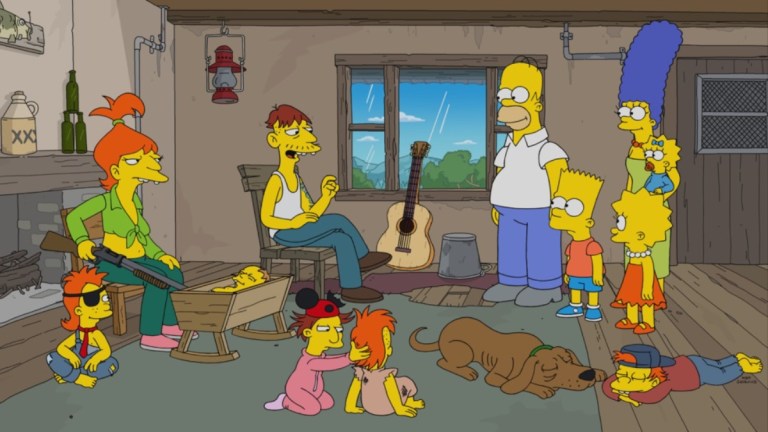 This The Simpsons review contains spoilers.

The Simpsons season 32, episode 14, “Yokel Hero,” is an alternate take on the “small-town talent goes nowhere” trope. Cletus Delroy Montfort Bigglesworth Spuckler, voiced by Hank Azaria, picks and grins his way to the edge of country music stardom, prodded by true believer, Homer Simpson. Yes, this isn’t the first time Homer’s discovered a country singer, which is addressed in the episode. But he was drunk then, and had to drive miles off the beaten path. In “Yokel Hero,” he is also drunk, but this time he is walking.

The episode opens auspiciously. The gang is assembled at Moe’s Bar celebrating Carl’s birthday, which leads to an inspired melodic addition of “and Lenny more” to the greetings. It’s a special day, like Canadian Thanksgiving or Jewish Arbor Day, and Moe does things right. He even oils the barstools. Marge doesn’t appreciate it when she calls asking for Homer, which sets up the groundwork for the subplot. What price is freedom? Homer has someone at home angry that he might crash his car and die before dinner. But single guys, like Carl, Lenny and especially Moe, can drive off a cliff free as a bird. In a way, this is a foreshadowing to Cletus’s impending dilemma, which makes it something to sing about.

The episode is filled with songs, as this season has been generous with. It opens with Homer’s homage to “Singing in the Rain.” He dances like a tipsy Gene Kelly, while singing lines like “peeing in the drain … what a glorious feeling I’m blotto again,” and even finds a rhyme to bond him in friendship with Kirk Van Houten. The scene is ample evidence never to try and dance your way out of a public intoxication stop.

Homer first realizes the depth of Cletus’ music while in the drunk tank. The off-the-grid Hillbilly from Rural Route 9 is locked up for moonshining, and has deep blues. Of course, every small-town jail has a guitar, so Cletus gets not only a chance to countrify his emotional turmoil, but turn down a chance to electrify it. His simple melodies and lyrics which both rhyme and apple blossoms with tasty possums resonate with Homer, who vows to turn his life around, or at least take a detour.

This all happens very quickly, even the opening theme and couch gag are skipped, and the episode begins closing credits before the opening ones. We get a lot of information about Cletus’ family. Some it is contradictory to what we’ve thought we knew. He says still loves the gal he got pregnant when “they was 16.” In “Yokel Hero,” Cletus says Brandine Spuckler is his cousin, but in earlier episodes he’s said “of all the cousins I could’ve married, you was my sister.”

You might think Cletus is from a family of Goobers, but that’s his wife’s side. Cletus comes from a long line of no-accounts. He may not be able to resist a good pyramid scheme, but he knows BTS’s Jungkook. Cletus is the character who points out there are still two more acts to follow, and specially whittled credits to boot. Cletus is much more astute than the surface shows. There is a deep knowledge underneath his wisdom that has nothing to do with information.

He is, of course, a graduate of the Mississippi Institute of Trailer Trash. He also got a cultural education while squatting inside a closed Blockbuster, where he conceived his kids Be Kind and Rewind. Cletus knows the Andy Griffith-starring vehicle A Face in the Crowd is far closer than Homer’s insistence he is living A Star is Born, whichever version. Cletus is, however, of the opinion the 1932 film, What Price Hollywood?, which all four A Star Is Borns were based on, is the better movie.

The country singer in A Face in the Crowd was also found in a drunk tank, and had an inordinate amount of clout when it came to what his fans would do for him. The scene where Wiggum’s car is overturned by Cletus fans mirrors a scene where Griffith’s character tells a whole bunch of people who are listening to him on the radio to go down for a swim at a wealthy local household.

It is amusing how, in his management notebook, one of Homer’s first revelations is “people like good songs.” For an audience which has jars for both tips and teeth, songs about kids and a bellyful of ribs are as golden as Cletus’s first true love. This guy is the real Yokel Ono. Of course, his songs reach the audience. They are simple, painful and forged on generations of moonshine swilling. Cletus is immediately the cover boy on “Washboard,” “Backwoods” and “Entremanure” magazines. The show makes commentary on the country music industry only obliquely. Cletus now considers his family to be the Taylor Swifts, Carrie Underwood, all of them Mumfords.

Cletus is right about being afraid of success. He’s heard the celebrity stories. Even though Lurleen Lumpkin (Beverly D’Angelo), the country singer Homer managed before nationwide fame, sold 12 gold records, she spent the end of her career headlining a series of famous rehab centers. The Simpsons has never been above a little name dropping, but they really score big on Mr. Ed. Repurposing Saturday Night Live’s “the horse is a corpse” wordplay, we learn the beloved TV legend was a heroin addict. “This horse was on horse? Of course, of course” is a classically twisted line.

Even though Cletus notices, in person, “Elin” looks nothing like she did in the Nemo movie, we learn the actor/standup/talk show host is exactly as she seems. When she’s not dancing alone in her dressing room, she’s making the audience dance in punishment for not applauding loud enough. God forbid you look her billboard in the eye.

The story rises and falls so quickly, it might appear rushed, but it does play out fully, and was probably arranged this way so Albert Brooks could take over the final act. There really is no one who talks like A. Brooks. When he says he loves you, you feel loved. When he tells you you’re going to be bigger than Campbell’s Soup, you can believe Tomato Soup is an unreachable pinnacle. His spiel about how there are so many Netflix specials they should call them “Netflix normals,” and riffing on the Obamas is standup sitting down. He pitches a dinosaur animated musical to his basketball client because he could jump out of a tree and sing a song like a small dinosaur. Part of this tells us what a bullet Cletus dodged, but most of it was just to let a veteran guest mouth off. The Simpsons love Brooks, and usually reserve this kind of off-course riffery for Dan Castellaneta.  This is the reason there is no couch gag or opening, this may have been tagged on but it had to be.

Moe continues his sad sack journeys. He makes two sets of keys for Homer’s car, which he is holding until Homer isn’t drunk. The unspoken punch line to this is that it could be years before Homer is sober. Two more seasons have been added to The Simpsons, and that’s enough to drive anyone to drink. Moe turns that around by taking Homer’s car to be washed because it makes him “feel like a man who owns a car.” A very sad comment on an already sad life.

Both Cletus and Homer grow in this episode. Brandine shows Cletus how he was seduced by “promises of short underwear and professional haircuts.” Homer learns not to pause too long when Marge asks if he wants to disregard his wishes. Even Chief Wiggum learns you just might have the next national superstar locked up in a holding cell. As long as the evidence room is filled with cellos and hacksaws, he is a captive audience.

The Simpsons delivers an extremely nuanced take on several well-worn themes. We know “Yokel Hero” will come to a predetermined end, because Cletus is a series regular and forever stuck in his local role. He will never see his dream of an all-American family moonshine distillery with not a single American employed come to fruition. But the concluding factors are unique. Homer makes a great point when he says he wasn’t playing god. This is an original character. Even though it is a role he played before, he learned nothing from it. This makes the episode fresh. Homer continues to hold on to the emotional purity which bonded him with the message and messenger of the music. Cletus’ final advice, “What happens in jail stays in jail, unless you’re breaking out of jail,” is classic down-home, common sense comedy.