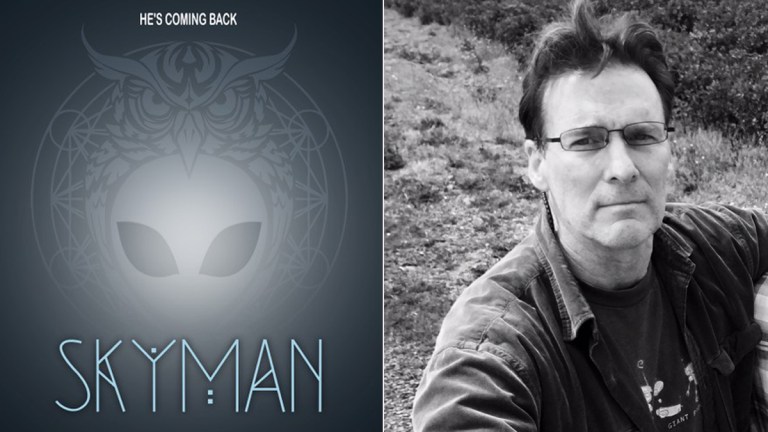 Daniel Myrick, the co-director and writer of the 1999 indie classic, The Blair Witch Project, has a new fictional documentary dealing with a subject he says he has a passion for, alien abduction. It’s called Skyman and it’s available on VOD and playing in drive-in theaters now.

“I’ve always been fascinated with the subject matter,” Myrick tells Den of Geek. “When I was growing up in the late seventies and early eighties, everything from UFOs to Bigfoot, Loch Ness Monster, Bermuda Triangle, and the zeitgeists in those days, and sort of inspired me as a preteen to kind of start my own UFO club in my neighborhood. And me and a couple of friends got together and did sort of our version of The X-Files, where we were out investigating neighborhoods and people that had visitations and whatnot.”

Myrick says his interest in the UFOs can also be seen in some of his other films.

“I did a movie called The Objective where we shot in Morocco. It was definitely, kind of, centered around sort of a UFO alien presence out in the desert of Afghanistan,” Myrick recalled. “We did that back in 2007 if I’m not mistaken. So it’s been a recurring theme for a lot of the stuff that I’ve done. And some could even argue Blair Witch is sort of in that same space. There’s a lot of overlap when it comes to kind of the unexplained.”

Myrick wanted his latest project to reflect what he and his friends had discovered during their research into paranormal phenomena.

“I wanted to do a story that sort of encapsulated a lot of that, a lot of those experiences in the form of a documentary that follows this one character, Carl Merriweather, that claims he had an encounter and is now kind of possessed 30 years later to go back out to that area of the desert and have a reunion,” says Myrick. “And it sort of is a hybrid of all those different stories that I grew up with, and I’ve been wanting to tell it for years actually.”

Although they have the paranormal in common, Myrick says there is a big difference between Skyman and The Blair Witch Project that have taken some viewers by surprise.

“It’s not a horror film,” explains Myrick. “It’s a character-driven film. A lot of people are kind of caught off guard, expecting another gotcha horror movie. It’s not that. It’s about treating the subject matter seriously. And the character behind it all is a character not unlike many of us that we all know. First and foremost, for me, I wanted to tell the human side of this story. I wanted to tell it from a human perspective. I didn’t want to come across as mocking. This is a serious subject for these people, and this character is a true believer. Whether you believe in what he says he saw or not, he believes it. And that’s important.”

Myrick says he’s learned to be sympathetic to those claiming to have extraordinary experiences.

“We have to keep that in mind as an outside observer,” he says. “They believe deeply what they have experienced and are many of whom are looking for an answer or an explanation or some kind of acknowledgment of what they experienced, which is an extraordinary experience in their lives.”

He says he has found many of the people who say they have these experiences to be more reasonable than one may expect.

“I wanted it to be truthful and sincere. And in much of my research over the years, most of these people that have these experiences are just everyday people,” says Myrick. “The vast majority of whom aren’t looking for publicity, they’re not looking to make, sell a book or anything like that. They’re just trying to process what happened. And so that’s the angle I was taking with Skyman, is that this is a sincere guy dealing with issues that we all deal with looking for answers.”

Although Myrick says he has been working on the movie for years, recent headlines have increased the public’s interest in UFOs. He hopes this will help the popularity of the film.

“Certainly, with the kind of a resurgence in UFO and alien awareness that has happened in the last couple of years, of course, the demonstration Area 51,” says Myrick. “But when we were shooting, the Air Force ‘Tic Tac’ video came out, and that was a big deal.”

Myrick feels the truth can’t be held back.

“I think what’s interesting is that you’re seeing a lot of stuff being unearthed, right? And it’s just harder to keep a lid on things now with the internet and everyone kind of communicating with each other. So I think awareness is much higher now than it was before, where you can kind of control the message a lot easier years ago, now you can’t as much. So this information is coming out.”

You can watch more of our talk with Dan Myrick about the real UFO influences of Skyman here: