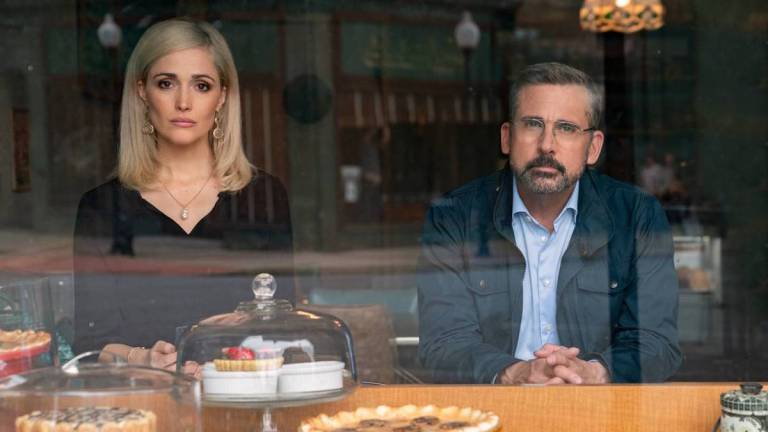 This isn’t right. When Gary, a political strategist played with constant anxiety by Steve Carell, enters the civics center of Deerlarken, everyone is smiling. Stranger still, both camps separated by a political divide he engineered are satisfied with the results of their election. This isn’t how politics is supposed to work. Not in America!

Yet this is the Twilight Zone reality Gary finds himself in during the finale of Jon Stewart’s Irresistible. Despite the fact Gary’s DNC internal polling shows there has been no voting conducted on election day, the town is publicly announcing that the Democratic contender Jack Hastings (Chris Cooper) tied with the Republican mayor in the local election. So the town is going to seemingly just treat it as a wash. Of course that’s easy to do when it turns out this isn’t their election day. In what amounts to the cleverest element of Stewart’s script, it’s discovered this small Wisconsin town has been pulling a fast one on the D.C. beltway insiders they lured in on an off-year. How did that work again?

In terms of plot mechanics, it’s laid out pretty clearly by Mackenzie Davis’ Diana Hastings. The sweet 20-something, no nonsense farmer’s daughter who Gary saw as a potential protégé—and probably something a little grosser—was the one who orchestrated the whole affair by faking a viral media moment for her father. As is established before Gary even meets Jack, the town of Deerlarken has fallen on hard times. The plant closed and the community is operating on a deficit that means the local school will probably be closed next year. Gary heard all of these woes at the local bar but only registered them as opportunities for political platforms (or theater). And Diana was all too aware that this would be the case.

“You guys only show up here once every four years and only then because it’s a swing state,” Diana tells a disappointed Gary. “And then when it’s over, you’re gone. But we’re still here with all the same problems we had before, just waiting around for you to come back and make the same empty promises as last time.” So Diana filmed her father, a former marine and farmer, having a Mr. Smith Goes to Washington moment by standing up to the local government over a culture war flashpoint. So rushes in $47 million in Super PAC money from both major DNC and RNC donors–all with little accountability attached.

“We used the system,” Diana continues, sounding more and more like a Jon Stewart speech on The Daily Show. “You made millions of dollars funneling tens of millions of dollars into this election economy. All we did is take a cut… but this system, the way we elect people, it’s terrifying and exhausting, and I think it’s driving us all insane.”

So the contours of the twist are pretty evident, but so is exactly what Stewart is accurately critiquing about the modern electoral industrial complex. The concept of the film comes in part from 2017’s special congressional election for Georgia’s 6th Congressional District. Held on June 20, 2017, it was the first major federal election after Donald Trump’s surprise victory the previous November. Seen by some Democratic strategists as a potential bellwether for the upcoming 2018 midterms, and a report card on Trump’s then already rocky start less than six months in the White House, it became an inflection point for special interest groups and Super PAC money.

“The incredibly outsize importance placed on this one little race [became] emblematic of the future for red and blue,” Stewart recently told The New York Times. “The national parties spent $50 million dollars in one district in Georgia on this weird off-year congressional race.” And for the record, the Democratic candidate Jon Ossoff lost in the historically deeply red of Georgia. However, the loss was by such a thin margin—Ossoff carried 48.22 percent of the vote—that Democratic strategists and some media boosters heralded it as a win. Ossoff is running again against a Republican incumbent in November, but now for a U.S. Senate seat.

Another major influence on the film are the political strategists who have a storied careers on the national stage… of losing. Stewart specifically namechecked Bob Shrum. Now a Professor of the Practice of Political Science at the University of Southern California, there was a time when The Atlantic described him as “the most sought-after political consultant in Democratic politics.” That time was in 2004 when he was senior advisor to John Kerry’s failed presidential campaign. Before that he was a senior advisor to Al Gore’s failed presidential campaign. Even earlier, he worked for Sen. Bob Kerrey in 1992 as he ran against Bill Clinton for the Democratic nomination; he was also a debate prepper for Michael Dukakis; a speechwriter for George McGovern when he ran against Richard Nixon in 1972; and he had the distinction of writing Sen. Ted Kennedy’s historic speech at the 1980 Democratic National Convention… where he conceded the nomination to Jimmy Carter.

Pulling from these episodes, as well as Stewart’s own experiences of seeing small town Americans beg for financial help from the political class in D.C. and New York, informs his movie’s justifiably cynical disposition. That and the truly horrifying fact that the U.S. Supreme Court essentially created Super Pacs with a pair of ghastly 2010 decisions, Citizens United v. Federal Election Commission, and Speechnow.org v. FEC. These decisions found that money spent in an election qualifies as “free speech” and made it possible for “independent expenditure-only political action committees” to engage in unlimited political spending and to raise unlimited amounts of money from corporations and unions—something a traditional PAC cannot do. Granted, these Super PACs are technically not allowed to coordinate with political campaigns, but as Irresistible shows, it is comically easy to circumvent this mildest of roadblocks.

So Stewart takes the entire political economy to task with the twist Irresistible ending and then imagines a happily ever after where the small town that political elite descend on like locusts get their own back “by taking a cut.” With $47 million of cash infused into their economy, they can reopen the plant and update it for the 21st century economy, and they can save the local school.

It also lets Stewart grind a few more axes. One is a familiar target: the reductive problems created by our cable news punditry class. As his fictional scenario convincingly predicts national news networks failing to research whether it was an actual election year in a small town where a major horse race is brewing, actual CNN anchor Candy Crowley gets to ask talking heads in an amusing cameo: “Isn’t there a way to report the news without so much speculation, without a false sense of urgency that causes us to breathlessly report facts that are maybe not facts. Are we framing these stories on an artificial right-left axis because that’s the way our pundit economy is set-up?”

It also allows Stewart to refreshingly take to task the Hollywood cliché of the much older male movie star and younger female lead having a romantic relationship. When Gary asks, heartbroken, if he and Diana had a real flirtatious relationship, she responds, “In what world would this be okay?” His answer is the usual suspects: Los Angeles, D.C., New York, Miami, maybe Dallas.

Instead Diana stays in Deerlarken and eventually becomes mayor while Gary settles down into a violently hateful relationship with Republican strategist Faith Brewster (Rose Byrne). As Byrne is the best part of the movie, and some nihilistic cross between Kellyanne Conway and a 1940s femme fatale, it’s an amusing conclusion that allows Stewart to reduce his protagonist to one final punchline: This is a sendup of the marriage of actual Trump administration misinformation disseminator Kellyanne Conway and her vocally anti-Trump husband, George Conway. Ha.