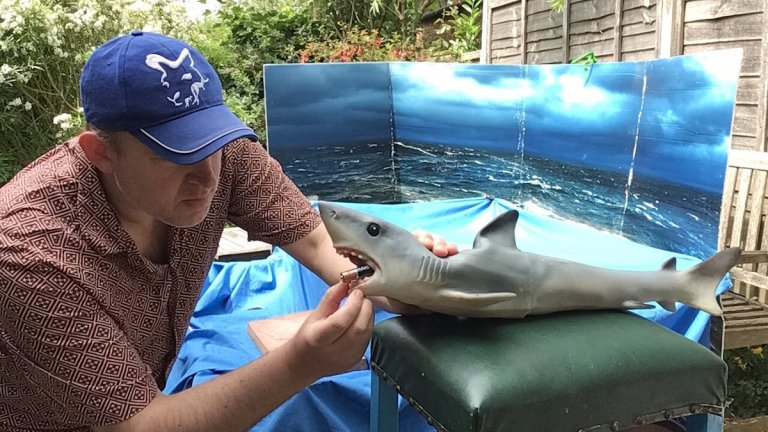 As many people have discovered during the Covid-19 crisis, it’s not much fun spending your birthday in lockdown. But for a certain 25-foot eating machine, its 45th will be one to remember. Rather than hinder celebrations, lockdown has actually brought together a community of Jaws fans – albeit remotely – to celebrate the anniversary of director Steven Spielberg’s seminal shark movie in a number of resourceful and creative ways.

There have been Twitter watch-alongs, including one hosted by celebrity superfan Kevin Smith, online Jaws-themed pub quizzes and now, launching on Saturday 20th June – 45 years to the day since the film’s release – a feature-length, shot-for-shot remake, created entirely during lockdown in the confines of fans’ homes, gardens, and swimming pools.

A fun, feel-good tribute, the aptly named #JawsWeMake is masterminded by Ross Williams, founder of The Daily Jaws – a website dedicated to the film and its fandom – and Dean Newman, the site’s chief writer. The pair have spent the last four weeks editing together footage sent in by fans and even taking advantage of their own Lockdown locks and facial hair to pop up in some scenes themselves as two of the movie’s key protagonists, ‘college boy’ oceanographer Matt Hooper (originally played by Richard Dreyfuss) and irascible boat captain Quint (Robert Shaw).

“We’ve got a good 90 per cent of the moments from the film, many using the exact camera angles,” says Newman. “Ross and I have appeared in a few scenes together through the magic of editing, him as Hooper and me as Quint.

“Some people edited their own clips, others sent the odd line here and there so scenes needed building up, which was more of a creative challenge. It’s all been woven together like some magical Jaws quilt.”

It won’t come as a shock to Jaws fans that the most popular moment to recreate was Quint’s powerful soliloquy describing the – real life – sinking of the USS Indianapolis at the end of World War II, when crewmen left floating in the water were picked off by sharks as they waited for rescue.

Taking place in the cramped cabin of Quint’s boat, the Orca, out at sea during the night, the wonderfully atmospheric scene is regularly cited as containing one of the best movie monologues of all time, and Shaw’s performance is utterly mesmeric. It’s little wonder fans were keen to give it a shot – even if they did have a tough act to follow – and Williams and Newman made sure that as many as possible got their 15 (give or take) minutes of fame.


Exploring the Pop Culture Impact of Jaws In the 1970s


The Shot in Jurassic World: Fallen Kingdom That References a Jaws Meme

“We wanted to include as many entries from Jaws fans as possible,” says Newman, “so some scenes, such as Quint’s Indianapolis speech, use four or five different performances. The trick was in picking the best elements of each and making sure they worked together. And it does.”

Another one to look out for is the most frequently referenced Jaws moment of all time, in which Roy Scheider’s aquaphobic Chief of Police Martin Brody first comes face to face with the giant great white shark.

Fans should also keep their eyes peeled for one or two familiar faces. British comedian Tim Vine is a huge Jaws fan – to the extent that he chose the film as his specialist subject on Celebrity Mastermind – and appears as no fewer than five different characters, some in the same scene (you can see him as Amity Island Mayor Larry Vaughn in the trailer). Williams also promises “something special in there that we haven’t announced that will make the fans go crazy!”

Vine admits that getting involved in the #JawsWeMake project “has been the perfect way to fill my Lockdown afternoons”, and he’s not alone.

Newman says the idea to remake Jaws – inspired by a group of kids who spent their summers recreating another Spielberg classic, Raiders of the Lost Ark – had been “on the back burner for a while” but that the coronavirus lockdown presented the ideal opportunity to get it started, providing something for fans to focus on during a difficult period of isolation.

“When Covid came along it was just the right moment when enough creative Jaws fans had time to play at being Steven Spielberg or Robert Shaw for the day,” Newman says. “The project has exceeded our wildest dreams and has been embraced by people at a difficult and challenging time. So, I think it gave people a fun escape and feeling of community at a time when many people have been stuck at home.”

But what exactly is it about Jaws – ostensibly a movie about a shark – that, 45 years on, continues to engender that sense of community among its devotees?

One thing Jaws fans never forget is their first time – it seems there’s a shared nostalgia for being scared out of your wits at a very early age, which leads to a continued fascination with the film.

“I’d have seen Jaws when I was around five and, like everyone, was terrified of going in the bath after,” recalls Newman. “It was the first VHS video I bought when I was 12. Around that same time I even ended up writing Jaws 5 in my English class. It was set in Cornwall and saw the return of Matt Hooper.”

“I was around four or five years old when I first watched Jaws so it was one of the first movies I remember seeing,” says Williams. “I watched it on TV with my mum who let me stay up late (a rarity), which added to my excitement… Once I’d seen it, I couldn’t get it out of my head. The shark, the excitement, and the characters. I was obsessed.”


How Jaws Went From Best Selling Book to Blockbuster Movie

For many fans that obsession continues their whole lives, and with more and more re-watches of the film and an increased focus on the story beyond the shark – of a town under siege, and of three men thrown together, each with their own motivations, baggage and fears – it develops into something richer and deeper that needs to be shared.

“Amity, as you know, means friendship,” quips Newman, quoting the island’s Machiavellian Mayor Vaughn. “And so does Jaws and The Daily Jaws. It’s great sharing stories about when people first saw it or when they have introduced it to their kids. It’s a part of the fabric of people’s lives and I think that is where we have been so successful. Like the film, we aren’t just about a shark, we are about people and relationships.”

Newman also flags the quality of the script as one of the things that fans bond over – “I think when you are younger you watch it for the shark and the attacks but when you are older it is for the characters and the dialogue” – and it’s undoubtedly true that Jaws is one of the most quotable films of all time.

Beyond the aforementioned staples – “You’re gonna need a bigger boat” and every word of the Indianapolis monologue – there are just so many lines that bear repeating over and over again (for some morbid reason, the phrase “partially denuded bone”, said by Hooper during the autopsy of an attack victim, is one that stuck with me from an early age).

“I’ll find him for three, but I’ll catch him, and kill him, for ten… For that you get the head, the tail, the whole damn thing.” “I can do anything; I’m the chief of police.” “I’m not going to waste my time arguing with a man who’s lining up to be a hot lunch.” “What we are dealing with here is a perfect engine, an eating machine…”  “Smile, you son of a bitch!” The list goes on… and pretty much every line Quint utters has a kind of poetry to it.

Newman says his favourite quote “changes all the time – pretty much every line is a stone cold classic, even from supporting characters” but for now plumps for “24 hours is like three weeks!”, a worried Amity townsman’s response to Chief Brody announcing that he is set to close the beaches during the lucrative high season.

When pressed, Williams plumps for Quint putting Hooper in his place with “Well it proves one thing, Mr Hooper. Proves that you wealthy college boys don’t have the education enough to admit when you’re wrong.”

With all those amazing lines of dialogue, no wonder Williams insists “Jaws demands multiple viewings” and Newman reckons he has watched the film “hundreds” of times – and “12 times in the last week alone” as part of editing the #JawsWeMake.

He adds that “It’s the Jaws Law to watch it whenever it is on TV.”

By some communal oversight among TV schedulers there is no showing of Jaws in the UK on its 45th anniversary (although it is available on-demand on Amazon Prime, iTunes, and Sky Cinema) – but that’s ok, we have a full-length remake filled with as much love, passion and attention to detail as the original, just waiting for us to sink our teeth into.

Watch the #JawsWeMake exclusively on The Daily Jaws