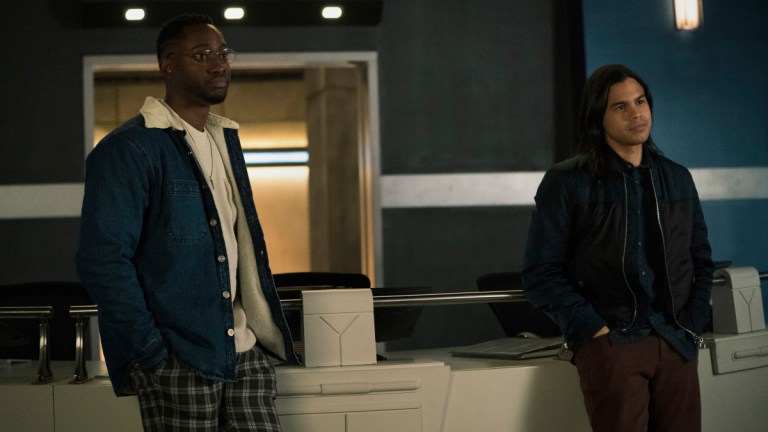 This THE FLASH article contains spoilers for Season 7, Episode 6

Actor Brandon McKnight was promoted to a series regular for The Flash Season 7 last year and some fans (read: cough yours truly) may have wondered whether there was space for Chester P. Runk on a series that often struggles to give its existing cast of characters meaningful things to do.

After all, Carlos Valdes’ Cisco was absent for the bulk of Season 6, Danielle Panabaker’s Caitlin took a near-permanent backseat to her Frost alter-ego that the series is only just now correcting, and though we all love Jesse L. Martin, Joe West hasn’t had much of an arc to speak of in the past several years. Even Chester himself has conveniently disappeared to Grandma Runk’s house a couple of times this season already.

The Flash has gotten better about this by degrees since Eric Wallace took over as showrunner, with an overall approach to storytelling that feels a bit more balanced between the show’s sprawling cast. We could still use more Joe, but I remain hopeful, based on rumors and vague reports of where his story could be headed this season. But is there a need for a character like Chester, whose tech savvy and dedicated nerd jokes are already well represented on the team? (Though, don’t get me wrong, I love that STAR Labs crew now apparently includes a Doctor Who fan.)

If “The One With The Nineties” is anything to go by, that answer is yes – but not entirely for the reasons you might expect. This hour proves that Chester is a character worth keeping around, and not just because he’s handy with scavenged tech parts. He represents an important perspective that The Flash hasn’t always embraced, as a Black man who has struggled to find his place in the world. And this episode takes the time to finally focus on his story and experiences in a way the show hasn’t really bothered to do before. (That one conversation with Frost back in Season 6’s “Grodd Friended Me” aside.)

“The One with the Nineties” isn’t the best example of a time loop episode ever, or even the best one in this particular franchise universe. Legends of Tomorrow, which benefits from being a show that’s actually about time travel, absolutely nails everything about this trope with the Zari-focused “Here I Go Again.” Sending Chester and Cisco back to the past allows The Flash to build upon their fledgling bromance and make a variety of nostalgic jokes about everything from Space Jam to the existence of Blockbuster video stores. (RIP.) And it eventually does give us some truly great visuals – from Iris’s amazing afro to Frost’s chill hippie threads and Caitlin’s painfully horrible Working Girl hair.

But this hour is also a lot more serious than stories in this vein usually are, giving Chester the chance not just to wear painful 90s prints but to connect with the father his younger self never understood. So much of The Flash is about various characters having issues with absent, bad, or otherwise terrible parents that it’s honestly a relief to find out that someone’s father was just a poorly communicative tough love type rather than a complete monster attempting to take over the world.

True, I’m not entirely sure how we went from Cisco promising his friend that he’d track down the part they needed to Chester deciding to go see his dad himself and get it instead, but the end result is so surprisingly lovely that it’s hard to pick but so many nits. It’s obvious that the tragedy of his father’s death is something that has shaped the man Chester is today, but that’s as due to the fact that he felt Quincy didn’t care about him as it is to his absence. That Chester gets the chance to hear not only how much his father loved about him, but witness how determined he was to shape his life and thinking in positive ways, feels shockingly important to his future.

His father’s actions appear to have been somewhat misguided – tough love can only ever carry someone so far, after all – but they ultimately came from a place of care. This is, rightly or wrongly, his attempt to prepare his child for a future that would likely often be hostile to him for things beyond his control. And there’s something powerful about the realistic way The Flash chooses to depict this relationship, with its quiet acknowledgement of the way that the experiences of Black fathers and their sons are necessarily different than those, say, of Barry and Henry Allen.

Because without even knowing it, Chester has become his father’s son in almost every way that matters: The out of the box thinking, the recognizing the good in the things others willfully discard, the resourcefulness, those are all things that his father’s occasionally inscrutable methods were meant to instill in him, and clearly did. But now that’s something he can be purposefully proud of, rather than see as just another thing that makes him different.

That’s part of what ultimately gives him the courage to talk down Still Force avatar Deon. Granted, in several episodes, we’ll probably see just what a terrible idea alerting a time god to the fact that he can change everyone in Central City’s future actually was. But, for the moment, this is not just a win for Team Flash, but a moment that also allows Chester to feel closer to the dad he lost. And that’s the sort of peak heart that The Flash has always been so great at.

Does The Flash still have work to do with this character? Absolutely, particularly when it comes to establishing a place for Chester within STAR Labs and on the show’s larger canvas that is unique to his character and not just an extension or imitation of stories we’ve already seen – or should see – with Cisco. (Not every nerdy tech guy is or should be the same!) But it feels as though Chester really came into his own in “The One with the Nineties” and – possibly for the first time – I’m excited to see where they take this character next.