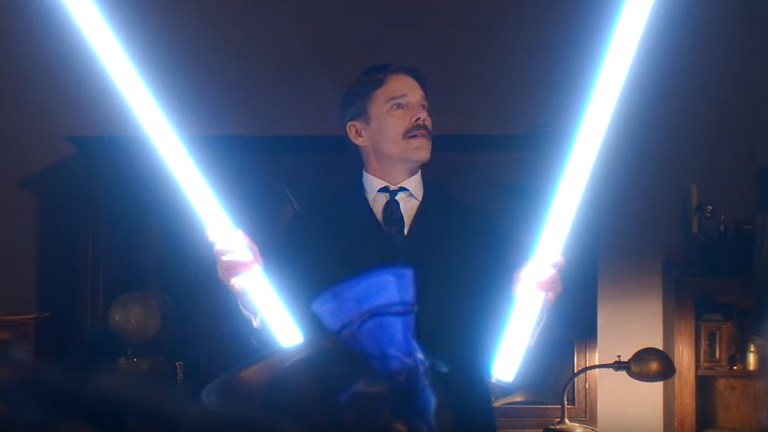 Ethan Hawke headlines the biopic, Tesla, having transformed himself—mustache and all—into the once-overlooked, retroactively-revered early 20th century inventor, Nikola Tesla. The indie offering, directed and written by Michael Almereyda (Marjorie Prime, Experimenter), premiered this past January at the Sundance Film Festival, and will make its general release via IFC Films.

Tesla might initially seem like a historical biopic that’s quickly revisiting a topical well, focused on the electrical engineering achievements of Tesla (who’s been portrayed in myriad film and television stints,) in his famous involvement in the electricity rivalry between Thomas Edison and George Westinghouse. After all, an impressively-cast movie covering that very rivalry, The Current War, just saw its belated wide release this past October. However, viewers get a meta-minded slap about 25 seconds into the film’s just-dropped trailer, proving that there’s more to it than we thought.

With that set, check out the trailer for Tesla just below.

As the official Tesla logline fully explains of the plot.

Indeed, as teased, the Tesla trailer doesn’t take long to fly the proverbial freak flag, quickly cutting to a Victorian-era-set scene in which Eve Hewson’s Anna Morgan is not only talking to the audience with a bizarre omniscience—like a steampunk gender-swapped Ferris Bueller reboot—discussing Tesla’s legacy in hindsight, but she subsequently opens up her laptop (say what?) and further explains said legacy with Google search results! Well, either this film is egregiously abusing the whole “Tesla invented it first” trope, or it’s merely setting itself apart from the pack with a different kind of narrative style. We’re leaning toward the latter, even if the former sounds oddly intriguing.

Hawke, the former Gen X movie lothario, brings the film the gravitas of a four-time Oscar nominee—Best Supporting Actor in 2015 for Boyhood, Best Adapted Screenplay in 2005 and 2014 for Before Sunrise and Before Midnight, subsequently, and Best Supporting Actor in 2002 for Training Day. He is joined in the main Tesla inventor trio by Kyle McLachlan (Capone, Twin Peaks) as Tesla’s early cohort-turned-rival, Thomas Edison, and comedian Jim Gaffigan (Most Wanted, Chappaquiddick) as George Westinghouse, who backs Tesla’s work with AC (Alternating Current) in opposition to Edison’s DC (Direct Current). The cast also consists of Donnie Keshwarz, Hannah Gross, Ebon Moss-Bachrach, Lucy Walters, Josh Hamilton and the aforementioned Eve Hewson.

Tesla is set for a day-and-date release at theaters (tentatively) and VOD on August 21.