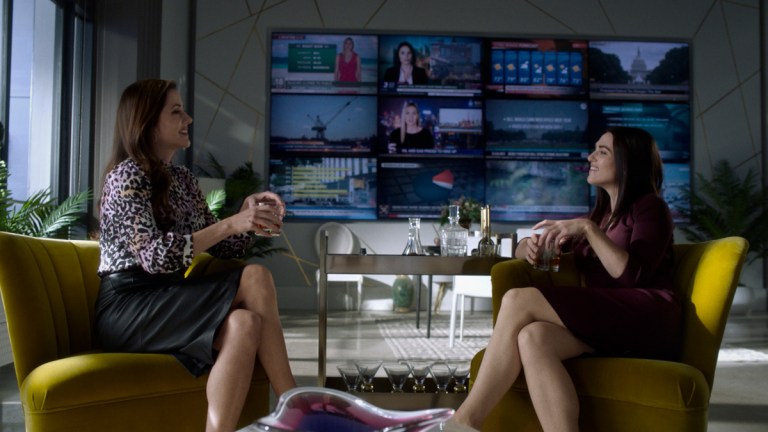 While our heroes work on freeing Supergirl from the Phantom Zone and its resident space dementors, Lex Luthor’s courtroom drama over his latest plan for world domination plays out expeditiously. It’s a somewhat uneven hour of television that does best when it leans into the lessons these women have learned, whether that’s Alex Danvers pushing herself to bring Supergirl home instantaneously, M’gann schooling J’onn J’onzz on the dangers of charging into dangerous missions too quickly, or Lena Luther in what feels like a synthesis of everything the character has learned in six seasons of trying to be a good person in a world that expects her to be bad.

The case against Lex Luthor rests on Eve Tessmacher’s testimony, effectively putting a target on her back. Supergirl hasn’t been easy on Miss Tessmacher, even if this iteration of the character doesn’t retain the memories of her first go-round with Leviathan, the Luthor siblings, and having her personality hollowed out to make room for Lena’s personal souped up Alexa. It’s painful to watch Lex use Eve’s emotions – which he always knew she would feel, because he retained his memories from the other Earth – and manipulate Eve once again, this time so publicly.

At CatCo, it’s becoming increasingly obvious that someone will have to eventually read William Dey in on the Supergirl of it all, or at least just start inviting the poor guy to lunch so he’s less depressed and isolated. Andrea Rojas’s take on getting into journalism (now that she illegally sold off her Obsidian North shares to her father in the dark of night) is still gross and sensational, with the altered photo of Lex and declaring him guilty before the trial even begins. She’s not above needling her friend Lena for an exclusive she’s completely uninterested in giving.

It was important narratively to establish just how much Lena didn’t want to talk about this difficult time in her life, but it’s also worth noting that she was only willing to talk when it was in a court of law, which is presumably for the public good, as opposed to in Andrea’s outlet, which could be considered biased and was even less likely to achieve Lena’s goal of actually stopping Lex.

It all sets the stage to force the question for Lena testifying, who would love nothing more than to let this cup pass, Lex’s trial her own personal Gethsemane. Lillian even offers her an out with the offer to sell her shares that would nominally allow Lena to check Lex in the private sector, so she could tell herself she could sleep at night. But while Lillian wants what’s good and easy for the Luthor name, Lena wants the truth, even if it means she looks bad in the process

Watching Lena lure Lex into her trap and effectively cross-examine him from the witness stand is a delight. The moment when the penny drops and we realize exactly what Lena had planned, that she is in control and has goaded Lex into telling the truth, is an exhilarating one. For once, Lex is on the other end of someone else’s checkmate. It’s a moral victory – though not a legal one – for Lena Luthor to both turn down this universe’s version of her mother and to outsmart the perpetual manipulator that is her brother.

Moreover, Lena faces the music. She told the truth, even knowing it will bring scrutiny, which we’ll likely see play out in the next few episodes. Her testimony could even lead to her potentially being labelled as a villainous Luthor, the very thing she’s fought so hard for so long to avoid. But part of Lena stepping into her true power is holding herself accountable. In the premiere, we saw her making amends to Supergirl, and now she’s making amends to the public of National City, even if it comes at a cost.

One thing that doesn’t quite sit right is the ending. Lex and Lillian’s celebratory chess match gives the feeling of waiting for the other shoe to drop, for some reveal of a shady trick up Lillian’s sleeve that led the Lex’s exoneration. But it never comes. Now, in the real world, the idea of a rich fascist getting off scot free when he commits crimes against humanity makes perfect sense, though he’d likely be represented by Alan Dershowitz. In the world of Supergirl, though, it feels strange for him to be exonerated so quickly, without any meddling or evil doing afoot, unrealized explosive intentions aside.

Supergirl is still stuck in the Phantom Zone for the foreseeable future, with either her dad or a phantom masquerading as him (telling her to submit to the phantoms and not antagonize them sure sound like what a phantom would want Kara to do…) so for now, Lena has to make big, heroic choices on her own. It’s not going to be easy and they won’t all be winners, but she’s headed in the right direction and facing her brother and mother on her own terms, and that’s a powerful start.