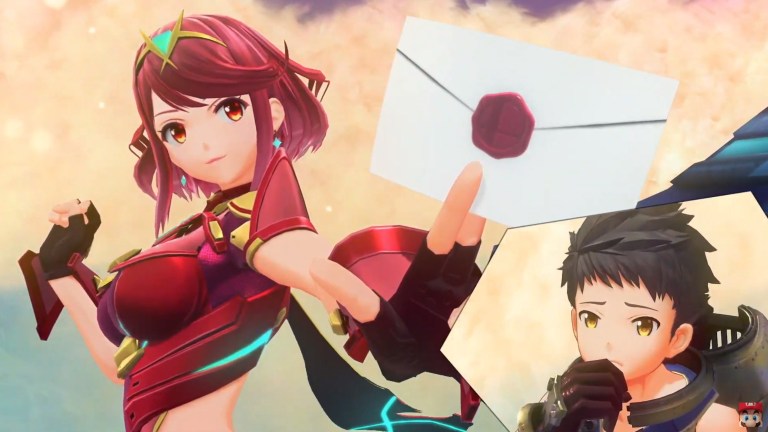 The long wait for the reveal of the latest Super Smash Bros. Ultimate characters is finally over as Nintendo has announced that Mythra/Pyra will join the game’s astonishing collection of playable fighters.

Nintendo’s confirmation of the latest Super Smash Bros. Ultimate characters has prompted the usual reactions from franchise fans everywhere. Of course, that’s really another way of saying that there are legions of fans out there who are still (vocally) wondering why Waluigi, Geno, and Sora aren’t in the game despite years of requests. As nearly every Smash Bros. update has taught us, though, it’s hard to please everyone without acquiring the rights to nearly every character that has ever existed and then finding a way to add them to the fighting game.

Of course, there are many more who walked away from the Mythra/Pyra reveal with the simple question, “Who are Mythra and Pyra, and why are they in Super Smash Bros. Ultimate?”

Well, to answer that first question, Mythra and Pyra are characters from the Xenoblade series. They made their debuts in Xenoblade Chronicles 2 where they quickly established themselves as incredibly powerful figures who played significant roles in the series’ extensive lore. Interestingly, they’re also essentially the same character.

Actually, that’s kind of an oversimplification. You could consider Mythra to be the “base” character as she created the personality of Pyra following an intense moment of grief. Mythra hoped to seal her incredible power behind this personality as a kind of preventive measure. To cut through a lot of lore, things didn’t exactly work out that way. Pyra was uncovered after being held in stasis for around 500 years, and Mythra and Pyra spent some time swapping between each other as one was awakened in response to various scenarios.

That dynamic will be replicated in Super Smash Bros. Ultimate as Pyra and Mythra will be presented as one selectable character who has the ability to swap between both personalities. If you’ve ever played as Zelda/Shiek in Smash Bros. Ultimate, you’ll be familiar with how the dynamic works from a rough mechanical standpoint.

Just like Zelda/Shiek, the choice to present the characters in this way is a surprisingly lore-friendly way to incorporate them both into the Smash Bros. experience. While we don’t have a full rundown of their respective abilities available as of yet, it should be noted that the two are relatively similar in terms of the attributes which would most readily apply to Super Smash Bros. (combat skills and equipment). It’s not entirely clear how certain personality differences such as Pyra’s excellent cooking abilities and Mythra’s amateur cooking abilities may be reflected in the game as a way to help distinguish the two, but if Nintendo can make a small army of Fire Emblem characters feel unique, we’re sure they’ll find a way to make the swapping mechanic work yet again.

As fans on Twitter are also pointing out, it’s interesting that Mythra/Pyra are being added to the game now as they were favorite characters of Etikia: a popular Smash Bros. player/streamer who passed away in 2019. While there’s been no confirmation that any recent character additions have been meant as a nod to the streamer, some fans in the game’s community are celebrating the idea that he would have enjoyed seeing these recent additions to the game.