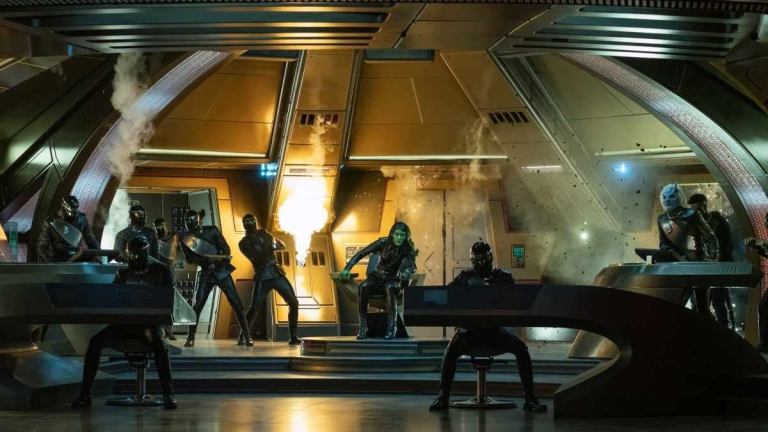 Star Trek Discovery wraps up its third season with a finale that’s equal parts action and empathy, and though the mix of the two doesn’t quite work as well as some viewers might like, the end result is fairly solid. Despite an occasional overreliance on fight sequences, “That Hope is You, Part 2” ultimately affirms the central messages of this season – that connection matters, the ways we care about people are important, that empathy is its own kind of superpower, both for ourselves and others.

In fact, I sort of wish this episode had doubled down even more on that lesson.

Don’t get me wrong, everything involving the retaking of the Discovery is fast-paced and entertaining, including several crazy near-death escapes that should not work at all but do, because this is still Star Trek after all. The sequence in which Michael and Book race/fight through the ship’s inner series of turbolifts is particularly intense and exciting to watch.

But as someone who is more than a little tired of Michael being the figure saving the day all the time – in this episode alone she rescues Book, kills Osyraa, comes up with a plan to jump the ship back to the Verubin Nebula, and takes over the captain’s chair– it’s the scenes with the Tilly and the rest of the Discovery bridge crew that really pack an emotional punch. 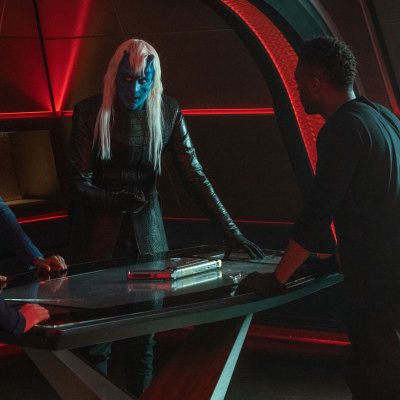 
Star Trek: Discovery Season 3 Episode 12 Review: There is a Tide… 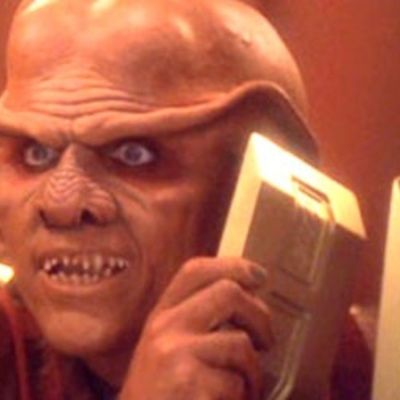 Perhaps it’s because it’s been three seasons now and we’ve had a little more time to get to know secondary characters like Detmer and Owo and Bryce. But their struggle to stay alive together, sharing their tiny oxygen tank and ultimately choosing to sacrifice themselves so that one might have a shot at blowing up the nacelle really got me. Especially Owo’s “I love you all” to the group.

That felt both necessary and earned. They’ve all been through so much together now. They’ve healed together. The group has gelled in a way this year that they hadn’t really before as a result of the insane journey they’ve all taken together, and I’d love to see Discovery really explore these relationships next season in significant ways.

That same sense of emotional connection is what ultimately drives the story back on the dilithium planet. Saru doesn’t prevent a second Burn with phasers or fighting but through empathy. By listening to the story of a frightened young man who didn’t know what to do with the mad that he felt and who unknowingly destroyed millions when he let it out.

“Even in fear, Su’Kal, you can still step forward,” Saru tells him, and if that’s not the lesson that maybe we all need to hear, right now at this particular global moment, I don’t know what is.

It is Saru’s kindness, his willingness to help Su’Kal face his own inner darkness and find hope again that ultimately wins the day. And after a season that has wrestled with emotional trauma on multiple levels, this feels like a particularly important note to end on. Maybe the fear doesn’t go away, completely. Darkness will always be present. But we can step out to meet it anyway.

This finale thematically bookends the Season 3 premiere, “That Hope is You, Part 1” nicely, which saw Michael adrift in a new world she doesn’t recognize. Over the course of this season, she’s forged a place for herself in this new future and struck a balance between who she in her own time and the woman that she has become in the wake of everything that’s happened to her since she left it.

The idea of Michael Burnham as the captain of the Discovery has a certain sense of inevitability about it, if only because we’ve all probably been expecting – or dreading, your mileage may vary on that point – it for years. After everything, is Michael truly Starfleet captain material? I honestly don’t know. She’s an out of the box thinker, a risk-taker, and a dedicated cheerleader for the Federation. She loves her crew, that’s for sure, and she believes down to her soul in what they stand for. And that counts for an awful lot.

But Michael is also much more interesting as a character when she has an authority figure or structure to push back against, rather than is herself in a role that requires her to make leadership choices herself. We’ll see how it goes, but there’s part of me that will always wonder if she might have been happier with Book do-good-ing around the galaxy on her own terms. The new uniforms are snazzy, though.

In the end, “That Hope Is You, Part 2” neatly manages to tie up most of the outstanding plot threads from this season, and give the group a mission for its next, one that seems to fit much more neatly into what we generally expect from a Star Trek series. Will Season 4 be more episodic in nature, as the crew jaunts through space delivering dilithium to far-flung planets, meeting new cultures, and exploring this vast new future along the way?

Getting to the future was so traumatic for the Discovery team – here’s hoping they (and, by extension, us) get the chance to see a bit more of what it looks like now.

Have I ever been as pleased to see someone get unceremoniously kicked off a turbolift as that Zareh guy? What a jerk. He called Grudge fat!! Clearly, he deserved death.

Speaking of Book, yes the revelation that his mystical Doctor Doolittle abilities can talk to the spore drive was incredibly convenient, but I am wildly grateful that the show has given him a reason to stick around beyond his relationship with Michael.

I want Saru and Hugh to give me emotional pep talks when I’m doubting myself. Truly, Hugh’s determination to be everyone’s mental health counselor – even people he’s just met – is charming.

One of the best things about this finale series of episodes is getting to see Doug Jones act like an alien as a human. The way he still holds his body and moves as Saru does is so good.

As for Doug Jones, there’s no way this show is letting him go, right? I guess the question is more how will Saru return to Discovery? Will he indulge his obvious dorky dad energy and show Su’Kal the stars he’s missed all his life? Will he be Michael’s Number One?

It sort of sucks that we didn’t really get to see a follow-up scene between Michael and Stamets after she basically ejected him out of an airlock last week. Truly, she did the right thing, but no matter how relieved they both must be that it all turned out okay in the end, that first meeting must have been awkward.