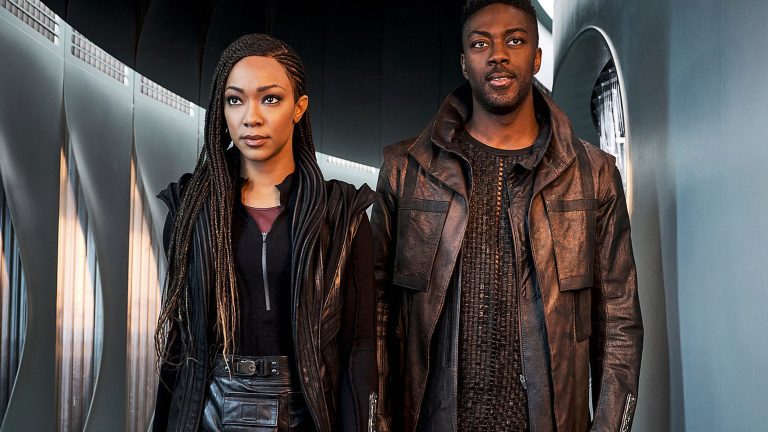 Star Trek: Discovery had a lot to do in its third season, what with launching the franchise into a far-flung future, saving all sentient life as we know it, and essentially rebooting the show going forward. After leading her crew into a literal strange new world, Michael Burnham then had to spend a year in the future without them, a twist that forced her to decide who she was – and who she wanted to be – in a world where she no longer had the structure and expectations of Starfleet to define herself against.

There, she also meets a man named Cleveland Booker, a Kweijan courier whose loner lifestyle is really just a cover for his work saving endangered animals across a galaxy that has seemed to stop caring about whether innocent and vulnerable creatures live or die. Book serves as Michael’s pragmatic, largely cynical introduction to the 32nd century, a man who has come of age in a universe largely without the Federation and has little trust in things like benevolent institutional authority.

Despite his outward skepticism, he and Burnham are actually very similar: Dedicated do-gooders with prickly outer shells who both believe in helping others and living their lives in service to something larger than themselves. (More importantly, Book is also a cat person, and if he’s good enough for Grudge, he’s good enough for me.)

While the relationship that ultimately develops between the two is fairly predictable – most of us assumed/hoped they’d fall in love pretty much as soon as we saw the Season 3 trailers – what Star Trek: Discovery manages to pull off with in terms of their relationship is rather remarkable. Their love story is one that, despite its near-preordained status, feels effortless and natural, allowing both Book and Burnham to grow into their best selves alongside one another.

Michael’s only previous love interest on Discovery was her disastrous romance with Ash Tyler, who turned out to be a Klingon sleeper agent with a fake consciousness and reconstructed body built from the DNA of a captured Starfleet officer. It was exactly as bad as it sounds and probably worse than you remember.  (Also, whew, Season 1 of Discovery was truly grim as hell.) So, it would be easy to understand if Discovery as a series was somewhat reluctant to pair its leading lady off again anytime soon, romantically speaking.

But, from its very first moments, Burnham’s relationship with Book feels like something entirely fresh and new, both for her character and for Discovery itself. There’s no real will they/won’t they drama here, and the mature, sincere connection that develops between the two is both charming and sweet. Even though she meets him at what is ostensibly her lowest point, Michael still feels like Book’s equal in every respect, and he becomes her friend long before anything romantic ever happens between them – as well as her sounding board, teacher, and general confidante.

The two are partners in every sense of the word, whether that means Book putting his life on the line to retrieve an important object for Michael, or Michael going rogue to rescue him from an essentially enslaved salvage planet. She reluctantly respects Grudge and he tolerates her constant entreaties to join forces with the Federation. (A request which Book eventually acquiesces to, because he can see how important it is to Michael.) They negotiate, collaborate, and compromise, all without surrendering their individuality in the process. It’s all incredibly adult and healthy, and both characters are better for it. 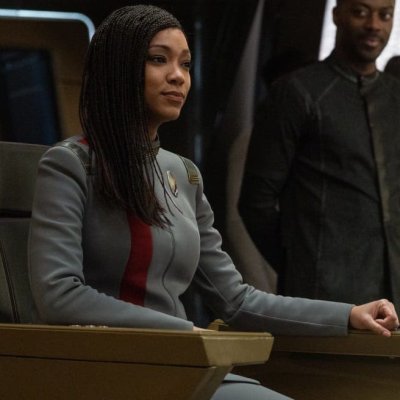 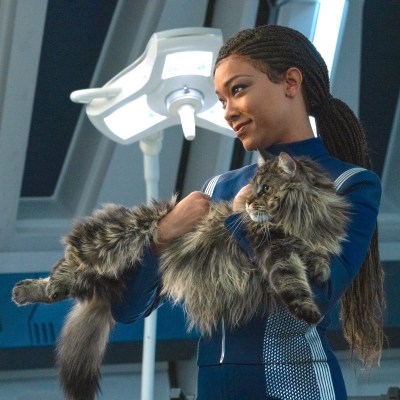 So much of Burnham’s journey on Discovery has been defined by her relationships to other people. She is Spock’s sister, Georgiou’s protégé (in both realities), Saru’s first officer, and the woman who got suckered into dating the Klingon hiding in plain sight. Her time with Book is perhaps the first instance where we’ve seen Michael able to simply be, in a way that doesn’t have strings or expectations of any kind attached. And as a result, Season 3 Burnham seems freer and more fully herself than ever before.

Though the show never explicitly depicts Burnham’s missing year in which she and Book ran around the galaxy searching for the U.S.S. Discovery, we can see its results in the woman she has become. This Michael is more confident in her own choices, more relaxed than we’ve ever seen her, and finally comfortable in her own skin. And, yes, that’s likely due to her finally stepping out of the shadow of Starfleet and doing her own thing. But it’s also thanks in no small part to Book, who explicitly encourages her to be herself without judgment.

However, it seems unlikely though that the pair will have completely smooth sailing in Season 4, no matter how generally grounded and healthy their relationship might be. Michael’s promotion to captain of the Discovery will naturally create conflict for them, if only because of Book’s new official position within the crew as one of just two people who can operate the spore drive. As such, he’ll be generally obliged to follow her orders even when he doesn’t necessarily agree with her choices. (Something that I suspect I may well be harder for Book than he yet realizes, having spent years answering to no one but himself.)

And despite her well-documented love of Starfleet and support of its ideals, Burnham spent most of Discovery Season 3 questioning whether she still belonged in the organization at all. As she learns the ropes of being a captain, she’ll not only have to figure out whether she truly does, but how to balance the life she’s carved out for herself in the 32nd century with her new role. Season 1 Michael, for instance, wouldn’t have had any other life that wasn’t built entirely around Starfleet, so this will be a learning experience for both of them.

Yet, if nothing else, Discovery has already shown us that Book and Burnham are a formidable team, both personally and professionally. And if any Star Trek couple can figure out a way to come out stronger from such a potentially difficult situation, it’s the one who has spent the past season setting an example for what honesty and compromise can achieve. If only some other Discovery crew members (cough cough Stamets cough) could say the same.