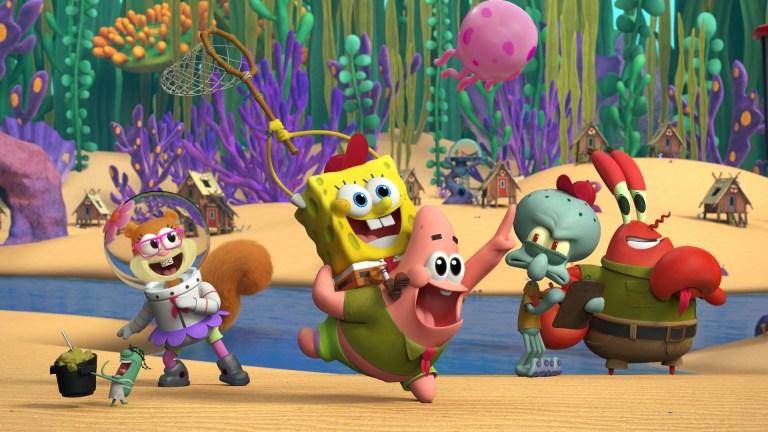 Are you ready for some jellyfishing? While the NFL may have brought professional football to Nickelodeon tonight with the NFL Wild Card Game on Nickelodeon, football wasn’t the only pastime featured on the network during the broadcast. At halftime, Nickelodeon debuted the first sneak peek of Paramount+ Original Series Kamp Koral: SpongeBob’s Under Years, and the new clip featured SpongeBob’s very first jellyfishing experience.

In the first-ever SpongeBob SquarePants spinoff, the CG-animated prequel follows 10-year-old SpongeBob SquarePants and his pals as they spend their summer building underwater campfires, catching wild jellyfish, and swimming in Lake Yuckymuck at the craziest camp in the kelp forest, Kamp Koral. I wouldn’t be shocked if we get an appearance from the magic conch, a sea bear, or see the first performance of the “Campfire Song Song.”

The first sneak peek comes from the series premiere “The Jellyfish Kid,” and finds young SpongeBob determined to catch his first jellyfish while his friends do whatever they can to help him. Check out the clip below.

As a longtime fan of the series, I’m excited to see the SpongeBob universe expand, but I’m not sure how I feel about the CG. Obviously, an appreciation of CG may change your reaction to the clip, but I find the animation style and lack of different looks and textures, a hallmark of some of SpongeBob’s best episodes, to be a detriment. Tom Kenny (SpongeBob), Bill Fagerbakke (Patrick), Rodger Bumpass (Squidward), Clancy Brown (Mr. Krabs), Carolyn Lawrence (Sandy), and Mr. Lawrence (Plankton) reprise their iconic roles, but a few of the cast members are seemingly doing too much to age-down their voices.

That being said, it’s fun to spot so many SpongeBob fan-favorites, like a younger version of jellyfishing pro Kevin and a baby version of Pearl. Hopefully the prequel will take more opportunities to show us origin moments for all of these supporting characters. Also, I appreciate how the end of the clip somewhat echoes moments from “Big Pink Loser,” with Patrick now helping SpongeBob as he hopelessly flails while trying to complete an easy task.

Kamp Koral: SpongeBob’s Under Years is produced by Nickelodeon Animation Studio. No release date has been announced, but the series is coming soon to Paramount+, ViacomCBS’ upcoming subscription video on-demand service. The former CBS All-Access, which housed Star Trek: Discovery, The Good Fight, and The Twilight Zone, is being rebranded and relaunched with original series including a show about the making of The Godfather and a spy series from Yellowstone co-creator Taylor Sheridan. Paramount+ will feature content from the full ViacomCBS portfolio, spanning broadcast television, news, sports and entertainment brands. The rebrand is said to take effect in early 2021.