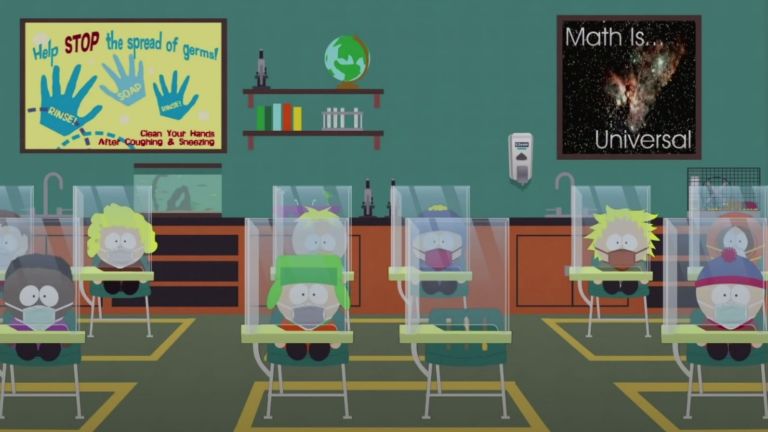 Once upon a time, some guy (or gal…but honestly: almost certain guy) decided to LARP on an Internet message board as a high level government official with Q clearance at the Department of Energy. That set a series of events in motion that culminated in the unthinkable…another hour-long South Park special.

While Comedy Central’s long-running animated classic is best known for being ultra topical by entering into production just one week before airing, its creators now seem increasingly willing to experiment with the show’s production schedule. Last September’s South Park The Pandemic Special was an hour-long installment that was announced well in advance. That became the highest rated South Park episode in almost a decade so Trey Parker, Matt Stone, and the rest of the team are going to try it again.

Comedy Central announced today a followup hour-long special called South ParQ Vaccination Special, which will premiere on Wednesday, March 10 at 8 p.m. ET/PT. The Pandemic Special will be rebroadcast an hour before it at 7 p.m. ET. The special will simulcast on MTV2 in addition to Comedy Central.

As you can tell by the conspicuous usage of the alphabet’s 17th letter, this special will almost certainly be addressing the QAnon phenomenon. To the uninitiated (and bless you if you remain untainted), QAnon is the Internet conspiracy theory that led to your grandma’s accelerated usage of unhinged, racist Facebook memes. Lord knows what satirical meat is left on the Q bone, but Parker and Stone will certainly try to find it.

Interestingly, in Comedy Central’s announcement, “South Park” is never referred to as its proper name, but always as “South ParQ.” This includes even the name of the series in the subject line of the email blast to reporters. The announcement was accompanied by this brief teaser.

The official logline for South ParQ Vaccination Special reads: “The citizens of South ParQ are clamoring for the COVID-19 vaccine. A hilarious new militant group tries to stop the boys from getting their teacher vaccinated.”

“A hilarious new militant group” is Quite a phrase to behold. While this may indeed be a new militant group to South Park, methinks they’ll still have some opinions on jobs and whether or not they’ve been took.

The existence of a “Vaccination” special raises some questions for the South Park continuity as well. It seemed pretty clear that Randy Marsh found the cure for COVID-19 at the end of Pandemic Special. Perhaps Vaccination Special will conclude that consuming mass amounts of…biological material is not the surefire COVID cure Randy thought it was.