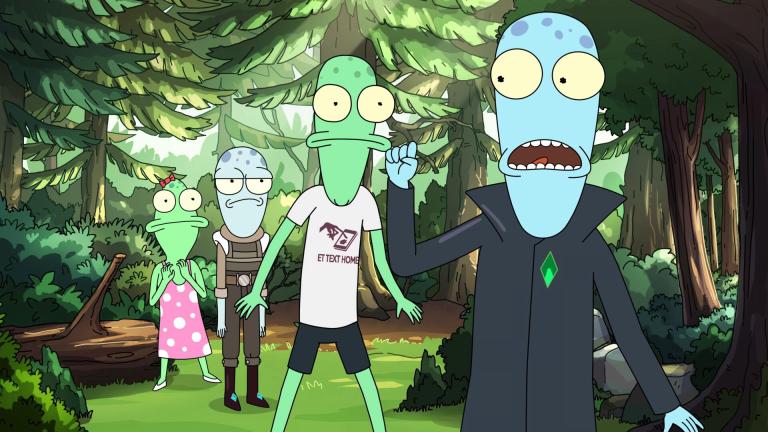 The aliens of Solar Opposites are like a classic sitcom family, sort of. They try to learn a lesson at the end of each episode, but they’re also opportunistic jerks with access to all manner of overpowered sci-fi technology, so the path to learning is always paved with a lot of human corpses. They’re also very stupid aliens, so all they usually end up learning is that they’re stuck together on Earth. But they love each other …maybe? Kind of.

In contrast with Solar Opposites’ creators Mike McMahan and Justin Roiland’s other show, Rick and Morty, which takes a modern approach of being big on character development that carries over from episode to episode, Solar Opposites riffs on the classic multicamera sitcom formula (e.g., Cheers, Taxi,or, most fittingly, Seinfeld), which emphasizes self-contained episodes that introduce and resolve a conflict within a half-hour packed with jokes you don’t need any prior knowledge to get. The alien family of Korvo (Justin Roiland), Terry (Thomas Middleditch), Jesse (Mary Mack), Yumyulack (Sean Giambrone), and The Pupa (Sagan McMahan) remain brilliant vessels to carry us through these kinds of stories because they’re such colossal screw-ups it only makes sense they manage to stumble into a problem of their own creation every episode, only to “resolve” it in the most destructive way possible.

If you’ve seen the first season of Solar Opposites and this all sounds familiar, that’s because, yes, to an extent, season two is more of the same, but I don’t view that as a negative at all. I gave the first season a perfect score because whatever flaws it had were negligible in what was overall such a strong, surprising, and hilarious season. Season two basically just takes the season one formula and goes bigger.

The premiere season saw the aliens wreaking havoc mostly within their own neighborhood. This time they’re ruining everything in different countries, bending the laws of nature, and even briefly threatening the fate of the entire planet. The first season was also gleefully ultraviolent and profane and that feels like it’s only been upped as well. There’s a charming, honest simplicity to how freely and gratuitously the unbleeped F-bombs drop in this show and season two only gets more charming and more honest. The violence also reaches inspired heights of grotesquery; two episodes in, Solar Opposites whips out one of its grossest and goriest ever sight gags, but it’s so bizarre and fluidly animated, one can’t help but be impressed.

Furthermore, Solar Opposites gets to have its sitcom plot cake and eat its continuity too (did that make sense?) with the return of an antagonist whose arc develops in a way I can 100% guarantee you will not be able to guess. And then, of course, there’s the return of The Wall, Yumyulack’s massive terrarium of imprisoned humans he’s shrunk down with a shrink ray. The Wall was the most obvious breakout success of the inaugural season; everyone who saw it found themselves engrossed and surprisingly moved by the serialized, dramatic (though still in many ways ridiculous) plot running in concurrent contrast to the aliens’ one-off shenanigans.

In season two, The Wall continues to be an amazing storytelling tool for Solar Opposites, allowing it to borrow and riff on tropes from more dramatic genres. Perhaps the only “weakness” with it this time is that it isn’t able to recapture the surprise of the first-season reveal of an entire Wall-centric episode. But the goings-on in The Wall continue to surprise and delight regardless with engrossing, satisfying, hilarious, and creative plot developments that absolutely work as an evolution of the tiny people civilization premise, taking it in directions vastly unique to what we got last season.

The second season of Solar Opposites is a lot like the first except bigger, crazier, and funnier. If you didn’t get it the first time, season two isn’t going to do anything for you either. But if you’re a fan of stupid aliens cursing, making obscure pop culture references, and fucking up our home planet, you’ll be grinning almost constantly through all eight of these new episodes. And, yes, everything to do with The Wall still rocks, too.

The first season got out a 5 out of 5 because it was so confident and creative, with precious few weaknesses I could point to. Season two is the same, but better.