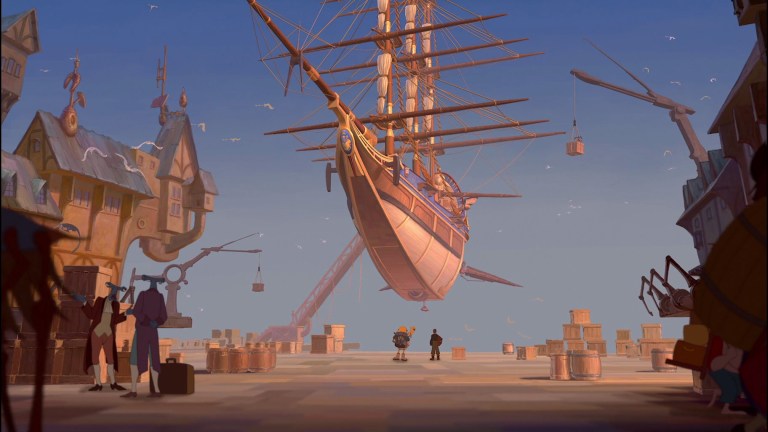 This Ships of the Northern Fleet article contains spoilers.

Ships of the Northern Fleet, the steampunk sky pirate TV show from the naughts, has seen a recent fandom resurgence on social media platform TikTok and in other corners of the internet. Adapted from a book series of the same name, SotNF ran for six seasons before taking its final bow in 2013 and sailing off into the sunset… until the inevitable reboot or revival.

In honor of the epic, pre-Game of Thrones fantasy series that launched a thousand queer ships, we’re listing up our five favorite episodes. So put on a playlist of your favorite sky shanties and let’s get started, Fleeters. Updraft!

It took Ships of the Northern Fleet an uneven first season to find its tailwind, but we get our first real glimpse at what this series would become in the Season 1 finale, when the show really starts to build out its mythology. “Clouded Tides” is the first time we hear the phrase “Four Fleets,” and when TV show viewers who haven’t read the books begin to understand that this world is so much bigger than the ongoing feud between the True Winds and the Necronauts. Captain Barnabas (Christopher Lee) and the Ropeswingers may have been our entry point into this world, but, by the end of Season 1, we know that Captain Hellman (Nathan Fillion) is the least of the Rosemary‘s concerns. The Apparatus is growing, and it doesn’t care which of the Four Fleets anyone belongs to.

While many viewers were unable to ever forgive The Daggers for setting into motion the events that led to Captain Montgomery’s death, the SotNF writers did their damnedest to give these “pirates amongst pirates” a redemption arc in the form of Season 3, Episode 4, which retells the events of Season 2 from the perspective of a random member of the Blade Admiral’s crew. Whether or not the ambition succeeds is up to each individual viewer, but if you tell me that you didn’t shed a tear when Duchess Mildred sings “Soon May the Wellerman Come,” I won’t believe you. That this episode also heavily features Blake (David Tennant) doesn’t hurt either.

“She’s buttoned up, Cap. Let’s fly.” The episode that sees the death of bespectacled badass and fan favorite character Annie (Catie Osborn) may be a controversial one to put on this list, but it’s hard to argue with just how much this episode raised the emotional stakes of the SotNF world. Annie dies not in an epic battle, but in a double-cross gone wrong—a plot twist that is a change from the source material and shocked book readers. It’s a bold choice for the show, and one that implies any one of these characters could die at any time. (Hey, at least she saves the dog!)

It’s worth mentioning that Annie’s death is considered by many as yet another unfortunate example of the “Bury Your Gays” trope (Annie is explicitly depicted as being “pansexual” in the show, even though she never uses that word to describe herself), though queer audiences tend to be forgiving of the show’s choice as the series includes so many canonically queer characters.

It’s honestly surprising that this show took so long to do a musical episode, given how integral sky shanties are shown to be to this world and its characters from the very first episode, but if we had to wait five seasons to get this television masterpiece, then it was worth it. Originally pitched in the writers’ room as a cross between Battlestar Galactica‘s “33” and Buffy the Vampire Slayer‘s “Once More With Feeling,” “With Lambent Voice” sees the crew drawn in by a siren during a routine mission through the Marish Abyss.

The fact that it all ends with Lady Ava deciding to leave the ship for good to live happily with her siren bae for the rest of her days is not only a clever and unexpected subversion of siren mythology but was a landmark moment in the depiction of queer characters on TV.

It’s no secret that Ships of the Northern Fleet‘s final season was, um, not good. But, amid the mess that was Season 6, we got a few truly stellar episodes, including this midseason standalone, which sees the crew trying to decide what to do with Glurp (Patrick Loller) after he uses The Gravity Invalidator to take down The Singing Crone, leading to the deaths of dozens of siren mutants.

For SotNF to take a much-maligned character like Glurp, who was originally created in a misguided attempt to draw in a kid audience, and use them to tell a tale about community accountability that challenges most of contemporary TV’s use of the “redemption arc” is inspired and inspiring. All I can say to that is: “Swiggity swaggity, let’s blow up gravity.”

What was your favorite episode of Ships of the Northern Fleet? Let us know in the comments below…

If you need more context for Ships of the Northern Fleet, check out the video below…

lyrics https://lyrics.az/?new_a=mixedsearch2&keyword=chris walker someone to love me forever a-z