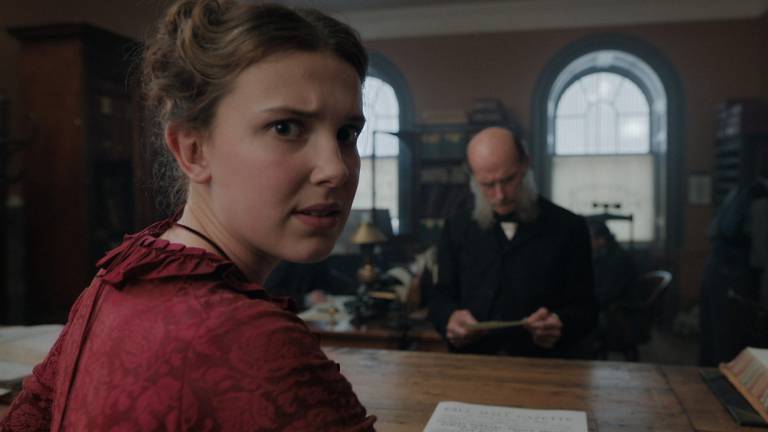 From the moment there were Sherlock Holmes fans, there was Sherlock Holmes fanfiction. In almost every conceivable way, Sherlock Holmes fandom informs nearly all major “geek” fandoms that followed it: There’s extensive canon to debate, highly organized fan groups, and most of all, fan-penned stories which often directly contradict the established canon of the characters. Usually, this results in fun debates, but when it comes to Sherlock Holmes, it occasionally results in lawsuits.

Currently, Conan Doyle Estate Ltd is suing Netflix in regard to the upcoming Sherlock Holmes spin-off, Enola Holmes. Here’s why their claims are baseless, why the history of Sherlock Holmes pastiches proves them wrong, and why Arthur Conan Doyle would hate what they’re doing in his name.

Conan Doyle Estate Ltd is suing author Nancy Springer, Netflix, and pretty much anyone else associated with both the Enola Holmes books and upcoming Netflix TV adaptation. Their basic claim is that the remaining 10 Sherlock Holmes stories that are not in the public domain contain copyrighted elements that are being lifted by Springer and Netflix illegally. Essentially, the estate is acknowledging that everyone is allowed to make big-budget Sherlock Holmes fanfic because the character is in the public domain, but that these books and the upcoming show violate aspects of Sherlock’s personality that are indigenous to the 10 stories that are still protected by copyright.

If you’re confused, you should be. Back in 2014, authors Leslie Klinger and Laurie R. King fought — and won — a similar battle against the Conan Doyle estate. Back then, the estate was essentially claiming that because there were a few remaining Sherlock Holmes stories not in the public domain, that meant that the character as a whole was still protected by copyright, meaning that anyone who did Sherlock Holmes pastiches had to pay a licensing fee.

This was only six years ago and in the U.S. the estate lost its case that Holmes wasn’t in the public domain by virtue of a few stories still being protected by copyright. However, somewhat paradoxically, this case also created a legal basis for what’s happening now.

“It might seem that Conan Doyle Estate Ltd. lost that case, but they also won in a way,” Mattias Boström explains. Boström is a Holmes expert and author of the immense and detailed history of all things Sherlock; From Holmes to Sherlock. His point is super-important. While the character of Sherlock Holmes is in the public domain now, the ruling in 2014 actually granted the Estate a tiny bit of new power, which laid the groundwork for their new, bizarre, and hyper-specific claim. “In a previously complicated copyright situation, they had actually got a court decision [saying] it was against the law to use anything from the last ten Holmes stories (still not in the public domain at that time), which meant that they could go on and demand damages and a share of profits whenever someone did so.”

For most serious Sherlock Holmes fans, this claim is obviously bogus. As has been widely reported, one strange thing the estate is claiming is that only in the later stories did Sherlock Holmes become more emotional and empathetic, meaning that any Holmes adaptation or pastiche that portrays him as nice toward women or friendly in general would be violating those copyrighted traits that only exist in the last 10 stories.

Here’s how they put it: “Conan Doyle made the surprising artistic decision to have his most famous character — known around the world as a brain without a heart — develop into a character with heart. Holmes became warmer. He became capable of friendship. He could express emotion. He began to respect women.”

Okay, jurors and judges who are deciding this case, let’s talk about that last claim. The idea that Sherlock Holmes began to respect women onlyin the stories published in the 1920s. This is laughably false, and you can literally throw a rock at any Holmes fan and they can tell you why.

“I have seen too much not to know that the impression of a woman may be more valuable than the conclusion of an analytical reasoner.” — Sherlock Holmes

So basically, in one of the most famous, and earliest, short stories were written by Sir Arthur Conan Doyle, Sherlock Holmes says the Victorian equivalent of “Believe Women.” Sure, there are plenty of quotes from The Sign of the Four, or more famously, from “A Scandal In Bohemia,” in which Holmes claims sexist viewpoints toward women, but that doesn’t mean some kind of huge paradigm shift occurred post-1920. In fact, the entire premise of “A Scandal In Bohemia” rests on the premise that Holmes respects Irene Adler so much that he refers to her as “The Woman.” It might seem like a backhanded compliment, but any Holmes fan will tell you, Irene Adler is a proto-feminist icon, and Holmes freaking loved and respected the hell out of her. Again that’s 1891, and the first Sherlock Holmes short story ever published.

We could go further and talk about various examples of Holmes valuing friendship, and how all that clearly exists before the 1920s stories, but I think the point is fairly well-proven, the  “personality trait” of a warmer Holmes certainly exists in the public domain stories prior to the point where the estate is claiming this massive shift occurs.

“What those ‘character elements’ are, well it’s not 100% obvious,” Boström says. “I’m quite sure that Sherlockians might find a number of occasions in the other 50 stories that fit the Holmes-with-a-heart description.”

Nicholas Meyer (yes, the same Nicholas Meyer who directed The Wrath of Khan), is author of four Sherlock Holmes novels — The Seven-Per-Cent Solution, The West End Horror, The Canary Trainer, and 2019’s The Adventure of the Peculiar Protocols. When reached for comment on the Doyle estate, he says that, yes, in order to publish his first three novels (in 1974, 1976, and 1993 respectively) he did have to pay the Doyle estate. But not for the 2019 book The Adventure of the Peculiar Protocols, nor for his next new Holmes book, The Return of the Pharaoh, which is due out in 2021 from St. Martin’s Press.

“The Doyle Estate has a long and complicated history,” Meyer explains. “The estate has become various squabbling heirs — most of them having nothing to do with Doyle and still less interested in Holmes; except as a source of money to spend. They’ve used Holmes rights as a cash cow for their own pleasures.”

“I think Conan Doyle Estate Ltd. are doing really good things in promoting Conan Doyle and Sherlock Holmes when it comes to some of their other projects,” Boström says. “But I’m not a big fan of their way of describing infringements. It is not exactly making them more popular in the Sherlockian world, and I would rather the heirs just show the great sides of the author and his creation, rather than being laughed at on the internet because of actions for copyright infringements like this one.”

So, this latest cash-grab is nothing new, and as Boström and Meyer make clear, pretty embarrassing. Nancy Springer invented Sherlock’s sister, Enola Holmes, after all. Now,  it’s bad enough that the estate is lying about the nature of the stories, but what’s worse, is that, in doing so, they’re trying to make it seem like the character of Sherlock Holmes spent most of his initial publication history as a one-dimensional and terrible person. Anyone who has read the stories knows this isn’t true. It’s a shame that the people who hold the last scraps of legal rights to Sir Arthur Conan Doyle’s great stories, clearly, haven’t read them in awhile.