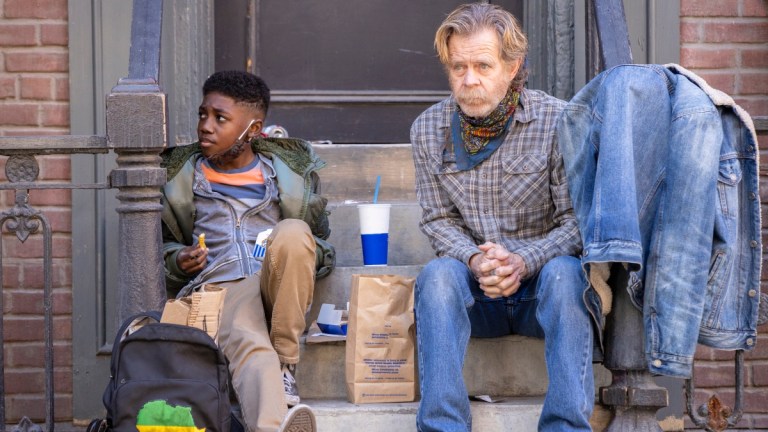 “We’re adults now. This is what adults do. They move on.”

Shameless tows the line over whether Frank Gallagher is actually wise or just so high on his own supply that he’s convinced himself that he’s a street smart genius. The truth of the matter is irrelevant because either way Frank still makes bold declarations as if they were the word of God. He’s a non-stop repository for nonsensical advice and Frank’s teachings have been present through every season, even if they’re lessons that the Gallaghers actively ignore.

“The Fickle Lady Is Calling It Quits” pushes a narrative where characters need to either move forward or slow down, but a greater source of wisdom that influences the episode’s structure is the laundry list of life lessons that Frank has spewed out for eleven seasons. This direction turns Shameless’ penultimate episode into one of the most emotional and impressive entries of the season and provides the right direction for next week’s big finale.

Previous seasons of Shameless frequently treat Frank like an unrepentant derelict and there are times where he even operates as an outright villain. This final season has worked hard to humanize Frank as he transitions into this feeble stage of his life and it’s been a very powerful experience. Now, an episode away from the very end of Shameless, Frank is at his absolute worst and at this point there’s no hatred towards this passive father figure, only pity. William H. Macy looks utterly lost in these scenes and he’s really put everything into this final season. Macy actually deserves some award consideration when the time comes and this is the episode that he should submit.

Frank is usually the one that drives the chaos forward in Shameless, right down to the previous episode, but “The Fickle Lady Is Calling It Quits” turns into a somber celebration of all things Frank Gallagher as Liam graciously tries to remind Frank of the indomitable fighting spirit that’s defined him for his entire life. Liam throws Frank’s own advice back at him when he tells him, “Either you run the day, or the day runs you.”

This episode feeds off of the energy between Liam and Frank from the previous installment and it’s appropriate that Liam is the one that’s with Frank during his weakest moments. Frank can rest easy knowing that Liam is living proof that goodness has come out of all of his selfish behavior over the years and somehow this child has been able to synthesize his ramblings into practical advice.

It’s a lot of fun to return to this farcical side of Frank’s character, but the comedic sensibilities of Shameless continue to be all over the place this season. There are some legitimately funny and subtle jokes throughout this episode, but there are also ridiculous setpieces where good samaritans get steamrolled by a truck. Shameless has always had a dark sense of humor, but it needs to have a little more confidence in itself and not resort to such broad gags that come close to breaking the reality of the show’s universe. Mickey’s consternation over housing complex guidelines feels more natural, and is funnier, than fatality punchlines or extended TikTok dance routines.

Mickey and Ian’s time in Chicago’s West Side becomes surprisingly fulfilling and it achieves the right balance between comedy and drama. This new lifestyle puts Mickey and Ian at odds with each other and it becomes a strong dissection of their characters as well as how far their relationship has come. Their material is full of great character moments, like how Mickey needs to listen to car crashes and general destruction as a white noise machine to help him peacefully fall asleep. Mickey’s discomfort over his new life becomes so severe that he has to sneak back into the Gallagher house and get up close and personal with the crime and chaos that echoes through the South Side.

I don’t expect Mickey to completely regress and be unable to forge ahead with Ian in this marginally swankier life, but this feels like a reasonable temporary hurdle for him to clear before the series concludes. Despite how this West Side lifestyle is a productive change for Ian and Mickey, it’s still something that Ian made official while Mickey wasn’t completely on board. It’s an understandable schism between them and the episode is smart to tease them falling back onto old habits, only to do the opposite.

“The Fickle Lady Is Calling It Quits” teases infidelity and disappointing decisions, but their selfless resolution to the problem is one of the sweetest moments from the entire season and basically what I’ve wanted from these two all season. Every character in Shameless has been through a tremendous amount this season and it’s impressive how Mickey and Ian’s conflict resolution methods have evolved from the volatile place that they were at when the season began.

Mickey and Ian display genuine maturity with their relationship issues and it’s a level of synergy and consistency that Debbie craves. Everyone is considerably worn down from the events of the season and is close to their breaking points, which in Debbie’s case finally causes her to take a long look at why her romantic endeavors have all been so toxic. This introspective attitude is good for Debbie, yet the victim mentality that she adopts and her anger that Frank has “ruined love for her” is a little too simplistic. Debbie has been in healthy relationships that failed because of preventable problems that she instigated.

Debbie polls the people in her life on how to build connections and stay together when her family is on the cusp of separation, which does carry a level of poignancy, even if not all of the insight that she acquires from the experience is healthy. It’s a storyline that works as well as it does here specifically because it’s juxtaposed around so many changes and goodbyes. Debbie does productive work to better herself, but the direction of her endgame is more than a little confusing.

“The Fickle Lady Is Calling It Quits” parses out several scenes where an aggressive woman named Heidi causes a wave of mayhem promptly after she’s released from prison. Initially it looks like Heidi’s roaring rampage will intersect with Carl’s new police gig and provide him an opportunity to take down this menace and become a hero again on the force. That’s not at all what happens and it’s madness that Heidi is meant to instead provide closure for Debbie!

Heidi literally threatens to shoot Franny with a revolver and minutes later Debbie is ready to spend the rest of her life with this loose cannon. The most frustrating thing is that next week’s series finale will likely hint at a happy future for this fresh couple, but based on everything that’s known about both of these characters it seems like it’s destined to go up in flames, perhaps even more quickly than previous relationships.

Carl doesn’t get to take out an angst-ridden recidivist, but he does still find some peace and gain a better understanding of his calling after a season of being frustrated. Carl’s impassioned speech is long overdue, eloquent as hell, and completely right. It also would have been justified several episodes back, but at this point Carl’s pent up frustration over what he’s witnessed at the police department makes sense.

It’s encouraging that Carl embraces his demotion and uses it to find clarity. It’s still hard to say if this police direction for Carl’s character was worth it in the end, but thankfully it doesn’t suck out his soul or leave him bitter at the world. Joshua Malina is such a hyperbolized schlub through all of this, which is entertaining and also reflects the greater level of incompetence that surrounds Carl while he attempts to do honest police work.

Carl and many of the Gallaghers are caught in flux when it comes to their new lives, but Kevin and Vee already have Chicago in their rearview mirrors. Vee and Kevin represent a force of confidence and their resolve towards Louisville inadvertently helps many of the Gallaghers work through their own sources of stress. It even feels natural that the person that Kevin and Vee sell their house off to turns into a break for Lip to diminish the colony of ulcers that have been brewing in him all season. This blessed development also doesn’t feel contrived because it’s an opportunity that Lip ultimately botches.

Liam reminds Frank that he’ll have both good and bad days, but this cautionary advice becomes even more applicable to Lip’s story. It’s heartbreaking how everything sours for Lip and there’s such palpable tension through it all. This is supposed to be Lip’s easy way out to a happy ending and it instead quickly becomes a nightmare. It’s very clear that something is about to go wrong and just how poorly Lip has handled this situation. It’s a slow motion car crash of drama to the worst degree.

This sword is left to hang over Lip as the episode concludes and he almost seems to accept the cloud of hopelessness that’s formed over him. It’s a sad, hollow version of Lip that doesn’t feel dissimilar to Frank Gallagher and his decision to go out on his own terms. Frank’s concluding moments are devastating, but they’re also the only time in the episode where he feels empowered. It’s a turn that fundamentally changes the tone for Shameless’ series finale and has the potential to bring out the best in each character. There’s now a small sliver of hope that Fiona might show up, whereas I was previously convinced that this was impossible.

“The Fickle Lady Is Calling It Quits” is the strongest episode of Shameless’ final season, it contains some of William H. Macy’s absolute best work from the show, and it instills some optimistic confidence for what the series has planned for its final installment. The Gallaghers’ lives are far from over and there’s still a lot that these characters need to figure out before the series’ conclusion. The tragedy that strikes in the episodes’s final moments is a strong catalyst that should bring everyone together and deliver a series finale that’s just as much about togetherness and supporting each other as it is about new beginnings and closing the door on the past.