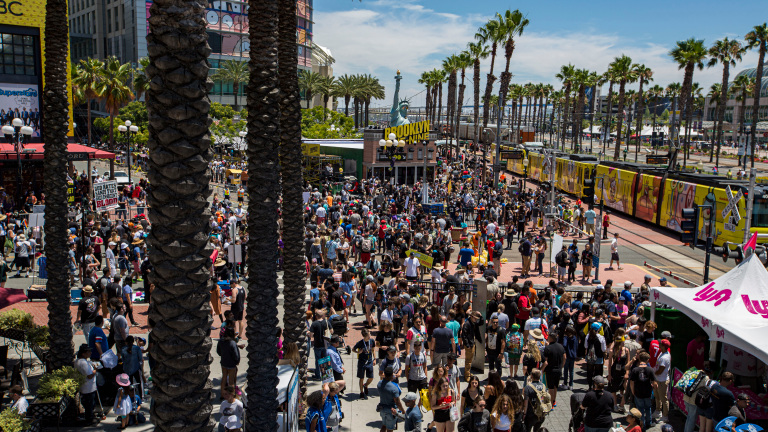 I’ll be the first to say that we all want big conventions back. As we head into the thirteenth month of varying stages of lockdown, with a vaccine rollout that still may seem frustratingly slow despite its increasing pace, and a worrisome rise in cases in the United States, it’s easy to see why fans and organizers are impatient for any sign that things are getting back to normal. And it’s hard to imagine a greater symbol of pre-pandemic life than the prospect of hundreds of thousands of people converging on the San Diego Convention Center for San Diego Comic-Con. Hence CCI’s announcement of an in-person event called Comic-Con Special Edition for Thanksgiving weekend, November 26-28.

The reveal of Comic-Con Special Edition comes less than a month after the cancelation of an in-person event for SDCC 2021, which had been scheduled for July 21-25 at the San Diego Convention Center. While not unexpected, it still felt like a gut punch for fans and the industry alike, but CCI softened the blow at the time with the promise that they were exploring the possibility of a November 2021 event of some kind.

The first details of that event were announced with a late Saturday night press release, a sure sign of confidence in the dates they were proposing. Those November dates will mark the first major U.S. holiday since the start of the pandemic where it seems likely that the majority of Americans would be able to have something approaching a normal family gathering. The brief press release was met with a chilly reception online by fans, industry professionals, and journalists.

It’s a baffling decision, one that taxes the patience and goodwill of virtually every aspect of the industry, from fans and vendors to talent and journalists.

Thanksgiving week is historically an incredibly busy travel period of the year in the United States and it’s likely to be busier than ever this year as the pandemic (hopefully) continues to recede and restrictions on gatherings are lifted. Which is to say, it’s also one of the worst travel weekends of the year. Airports are overcrowded, airfares are inflated, tempers are short, all so people can get to wherever their families are gathering for a long weekend. Travel arrangements for a typical July SDCC weekend are nowhere near as fraught, but they’re not exactly a picnic, either…and that’s without even factoring in the annual tradition of the hotel lottery, where you might land yourself a spot close to the convention center, or not at all!

The press release promises that “the Fall event will allow the organization to highlight all the great elements that make Comic-Con such a popular event each year, as well as much needed revenue not only for the organization but also for the community.” It’s probably wise that they start tempering expectations now, since publicists and talent probably won’t be in much of a hurry to ditch the first Thanksgiving with friends and family in two years for a con that could be held virtually any other weekend in the late fall or winter.

And even though movie studio and TV network news that has come to dominate most people’s perception of what makes SDCC important, let’s not forget that the convention center is primarily home to hundreds of vendors who fly in from all over the world to ply their wares, at considerable expense. Now they’ll be expected to do this during that aforementioned busiest travel week of the year, for the privilege of spending what is already a working weekend for a retailer hundreds of miles from their families.

It’s important to note that CCI is a non-profit, and they need revenue after their flagship event has been canceled two years in a row (not to mention the cancelations of the other conventions that also fall under its umbrella). Perhaps even more importantly, the economic impact of the pandemic on hundreds of businesses in the Gaslamp District of downtown San Diego where the convention center is located can’t be overstated. But both CCI and those businesses could get the desperately needed influx of cash on another November or December weekend. The current dates only force everyone to choose between their fandom and obligations that transcend it. Were this a normal year, this might be a more nuanced choice, but in an era where so many of us have been unable to see our loved ones for so long, it’s no choice at all.