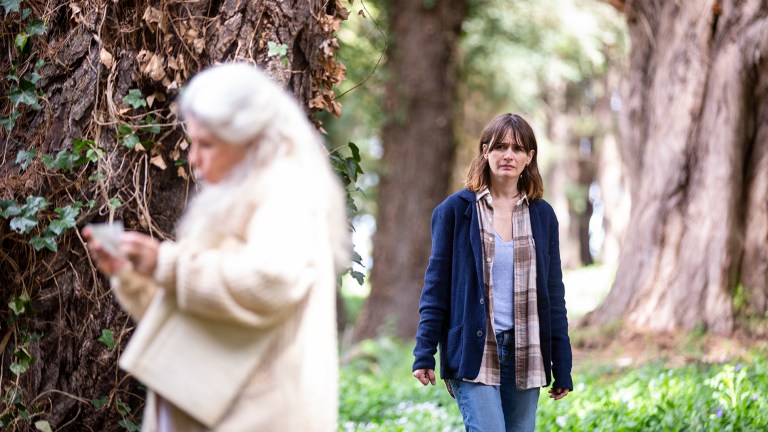 Losing a loved one is tough enough, but losing them to Alzheimer’s disease is a brutal, harrowing, and truly heartbreaking experience. Family and friends watch as the person they knew slowly fades away, their memories, physical abilities, and even sense of self vanishing like smoke drifting upward from a waning fire. By the time death comes to claim the shell of the person you once knew, its arrival is almost a blessing.

The horror film at its best allows us to experience our deepest real-life fears in metaphorical terms, which is what the excellent Relic does with specificity, empathy, and atmosphere to spare. Emily Mortimer plays Kay, a workaholic single mom who gets a call from the police that her elderly mother Edna is missing from her home in the Australian countryside. When Kay and her daughter Sam (Bella Heathcote) drive out from Melbourne to the house, Edna (Robyn Nevin) reappears after two days–but cannot recall where she’s been.

Edna’s house–untidy, dark, and littered with odd notes and markings–as well as her behavior lead Kay and a local doctor to surmise that the headstrong Edna is slowly sinking into the grip of dementia. But even as Kay tours facilities to which she can move her mother, Sam has doubts about her grandmother’s state of mind and suspicions that are borne out by increasing evidence that Edna’s house itself seems to have been infiltrated by an unseen, malevolent presence that can seemingly bend reality.

Like other recent horror films (I dislike the term “elevated horror” since the genre at its finest doesn’t need that distinction) such as The Babadook, Hereditary and The Witch, Relic works so well because of its complete cohesion between characters, theme and imagery. As the feature directorial debut of Australian-Japanese filmmaker Natalie Erika James (who co-wrote the script with Christian White), Relic and its focus on female characters ratchets up the empathy level in a way that a more masculine-driven film might not be able to do as effectively.

James reportedly conceived the film after watching her own grandmother succumb to dementia, and the grief and loss inherent in the situation oozes from every frame of the film, along with an impending sense of dread and a thick feeling of claustrophobia. Edna’s house is the fourth major character in the film, a metaphor for her decaying consciousness, and the way the house gradually closes in on the three women is indicative of how a horrible illness can wreak its havoc on everyone associated with the victim, emotionally or otherwise.


The Best Horror Movies to Watch on Shudder

Mortimer, Heathcote, and Nevin are all outstanding, the dynamic between the three defined by not just how they speak with each other but by how much is left unsaid. Mortimer perfectly captures the guilt of an adult who has drifted away from an elderly parent–she mentions at the outset that it’s been weeks since she called her mother–and now has to come to their rescue when it may be too late to make up for that lost time and negligence. That relationship weighs on the one between Kay and Sam, who plays both women off each other and is already starting to pull away from her mom.

And then there’s Nevin as Edna, a figure who fills the viewer with an unsettling combination of sympathy and unease. Her daughter and granddaughter’s own uncertainty around her is an honest reflection of how many of feel–but are loathe to admit–around the ill: the sense that we don’t know what they are capable of, unwillingly or not, and the subconscious fear that we could somehow catch what they have even if that thought defies logic.

Like many of its contemporaries, Relic functions as a slow burn, gradually accumulating layers of darkness and fear that eventually explode into a nerve-shattering third act. Almost all ambiguity about the nature of the women’s plight is erased as Relic goes into full-blown horror mode. But then James and White’s script veers off into an entirely different direction, providing the film with an ending that is poignant and, once you think about, perfectly appropriate.

James and cinematographer Charlie Sarroff fill the screen with shifting shadows and emulsifying darkness as the house twists, shudders, and reveals its hidden and unexplainable nature to three haunted generations of women. But even if Relic doesn’t answer every question it raises, Natalie Erika James’ highly accomplished first feature does conclusively determine one thing: that love can still comfort, even if it might never truly heal.

Relic premieres on VOD and opens in limited theaters and drive-ins on Friday, July 10.