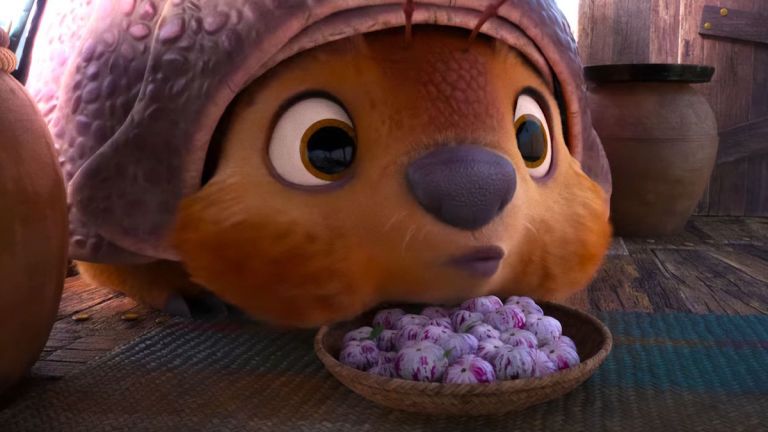 Outside of the dragon Sisu, Tuk Tuk might be the most adorable thing in Raya and the Last Dragon. Technically a fantasy creature who is half-armadillo and half-pug, this hybrid beastie embodies pure fairy tale fun in Walt Disney Animation Studios‘ latest adventure. And with his nifty hard shell acting as a giant unicycle upon which our heroine Raya gets around desert wastelands, we are sure kids are already wishing they could have a Tuk Tuk of their own.

It’s a nifty design, but what might surprise a lot of folks is the voice beneath the hard shell and cuddly countenance. Yes that’s right, Tuk Tuk is voiced by a real person, and those vocals belong to one of fan culture’s most beloved actors: Alan Tudyk.

The star of Firefly, Rogue One: A Star Wars Story, A Knight’s Tale, and many other films and TV shows makes for a surprising choice as the voice behind a creature that seems destined to sell a lot of stuffed animals, but there’s a very good reason for this: Tudyk’s become Walt Disney Animation Studios’ proverbial rabbit’s foot over the past nine years.

“You may be wondering about our Disney Animation good luck charm,” producer Osnat Shurer told us during a Raya and the Last Dragon press event in January. “Ever since he played King Candy in Wreck-It Ralph, Alan Tudyk has had a role in every film Disney Animation has made. Now we’ve asked Alan to stretch his Juilliard-trained skills in the past by playing the Duke in Frozen, a Weasel in Zootopia, and if you remember, a chicken in Moana. But we’re fairly certain that this is the first time that Alan’s been asked to perform as a fantasy armadillo-pug creature.”

As a versatile actor who’s run the gamut from appearing in Star Wars movies to James Mangold Westerns, a la 3:10 to Yuma, Tudyk has had a colorful career. But becoming a mainstay at Disney Animation during what many consider to be their second renaissance is a unique distinction. If you accept the conventional wisdom that Disney Animation’s new rejuvenation began in 2010 with Tangled, then Tudyk has been there since almost the beginning, appearing in the WDAS follow-up Wreck-It Ralph (2012) as the surprise villain. Since then Tudyk’s voice has been heard in every Disney film, increasingly in ways that feel like winking easter eggs for the sharpest ears rather than an obvious case of casting. Hence the dimwitted rooster in Moana and now as sweet Tuk Tuk.

In 2016, Tudyk seemed amused when he talked to The Wall Street Journal about his half-day of work in the recording booth on Moana—not counting a larger amount of aural research beforehand.

“It’s amazing to me that they’ve got four hours’ worth of me making chicken sounds,” Tudyk said at the time. “How do you choose from Take One to Take Six, which ‘ee-cawwwww’ really sells it?”

It seems an interesting challenge, and one imagines it was even more difficult for both the actor and his recording team on Raya and the Last Dragon, with Tuk Tuk being an entirely made up creature who needed to show a larger range of emotion and sounds than the dumbest rooster in cinema history. But it was probably fun to roll along with.

Raya and the Last Dragon is streaming via Disney+’s premier access now.