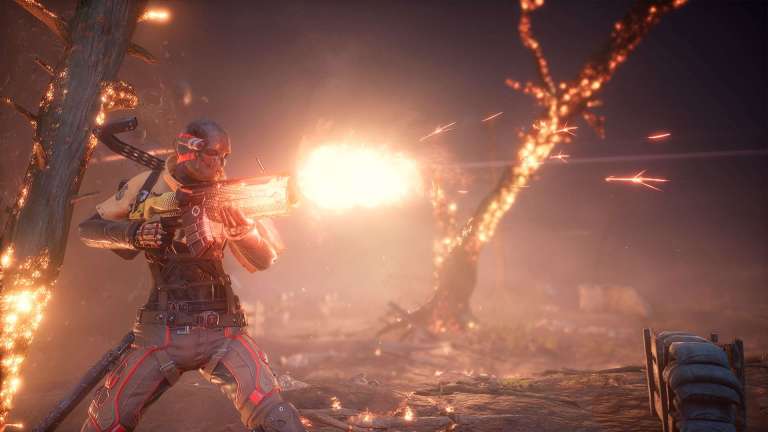 While Outriders is a pretty impressive looter shooter in a lot of ways, but it’s hard to deny that the game’s server and performance issues are ruining the experience for many players.

Maybe we should be used to these kinds of issues by now (and the difficulty of developing a game during a global pandemic almost certainly exasperates them), but it’s a shame that Outriders hot debut has been cooled slightly by the fact that many people haven’t been able to connect to the game in the first place. Others simply aren’t able to enjoy it without navigating a variety of performance issues.

While Outriders’ long-term fixes are going to likely come in the form of official updates and patches, you can make things a little easier on yourself by trying a few of these quick fixes designed to address some of the game’s most immediate issues.

The bad news is that the majority of Outriders‘ server problems seem to be based on the fact that so many people are trying to play the game right now. It’s the same problem we typically see whenever a lot of people try to play a new always-online game at the same time.

While there’s no great immediate solution for that problem, here are a few basic fixes you can try:

Outriders’ biggest problem on PC at the moment (aside from connection issues) is a strange “stuttering” glitch that affects performance as well the overall quality of the game’s visuals. Fortunately, players are starting to find workaround solutions to this widespread issue.

The most popular fix to the game’s stuttering problems at the moment involves avoiding Direct X 12 altogether. Instead, you’ll want to choose the “Play Outriders– DirectX11” option available to you via a dropdown menu when you launch the game.

Please note that this is not a universal solution. Even if it does work, you’ll likely need to use it alongside a combination of other fixes in order to even temporarily solve the game’s stuttering issues.

If you recently updated your Nvidia drivers in preparation for Outriders’ release, you may have inadvertently contributed to the game’s visual issues.

For the time being, you may want to roll your Nvidia driver back to Version 456.71. The Outriders team has brought this up as a possible temporary solution, so while there’s no guarantee that it will work, it does seem like this can help address some of the most glaring issues at the moment.

Disable Crossplay on Console and PC For Improved Overall Performance

As we mentioned before, one of Outriders’ biggest technical problems at the moment is the functionality of its crossplay features. By People Can Fly’s own admission, that feature is absolutely not working as intended.

Unless you really want to take the risk, we advise PC and console players to disable crossplay until the developers say that it’s safe to go back into those waters again. For that matter, you might just want to hold off on multiplayer altogether for a little while if the performance problems are really bad. It kind of sucks, but this seems to be one fix that offers 99% of players some kind of performance and stability boost.

How to Fix Outriders “No HUD” Glitches

Are you one of the many people currently wondering why there is no HUD in Outriders? It turns out that problem can be attributed to a surprisingly common glitch. Fortunately, there’s a reliable solution available:

There’s a chance you might have to do this more than once as there have been conflicting reports on how “permanent” this fix really is.

Interestingly, it seems that Outriders players on Steam can solve quite a few performance issues simply by going to their “Friends” list on the launcher and choosing to go offline.

Based on what we know about the game’s problems, it sounds like this change helps ensure that the title isn’t constantly searching for friends via Steam. Removing that system communication feature strangely seems to improve overall performance and connection stability.

Outriders isn’t the most poorly optimized PC game (at least compared to some other recent games), but analysts have found that there’s a pretty good reason why the game’s PC system requirements are so high in the first place.

In fact, you might want to “overshoot” system requirements for the time being. Just ignore the minimum requirements outright (for now), and aim for the recommended requirements as your new minimum. There’s every hope that some early fixes and eventual patches will make the game a bit friendlier to players with lower-end hardware, but for the moment, overkill seems to be the way to go.

This fix isn’t really about some of Outriders’ biggest performance issues, but if you find yourself annoyed by the weird way that the camera shakes during Outriders’ cutscenes, it turns out there is a solution (kind of).

Buried in Outriders‘ console and PC options is a setting for “Cinematic Camera Smoothing.” Some players have reported that setting this to around 0.50 seems to make things the camera a bit more stable, but as always, you’re going to have to play around a bit to get it to your personal comfort zone.

If you’re desperate to experience high FPS Outriders gameplay and can’t wait for updates and patches to fix the title’s underlying issues, then you’ll have to lower some of the game’s core settings.

I don’t recommend this set-up for anyone who wants to focus on pure visual quality, but here’s an ideal performance-based settings combo:

You’re going to want to tweak those settings a bit based on your preferences, set-up, and what kind of output you end up getting from the game, but they should offer a respectable jumping-off point.