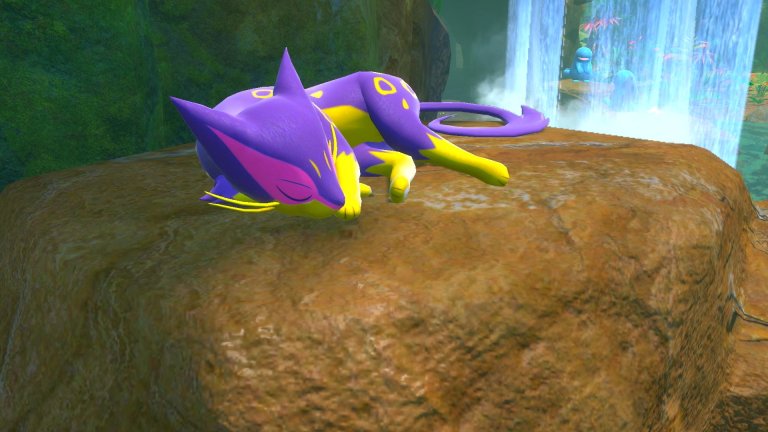 One of the most frustrating things in a video game is clearly being able to see that there’s a secret area you can access but not knowing exactly how you’re supposed to get there. While New Pokémon Snap is filled with such instances, few of the game’s secret areas have proven to be as elusive and tantalizing as the waterfall in Founja Jungle.

As a waterfall in a video game, you just know that there has to be something good behind it. Of course, New Pokémon Snap makes this area that much more appealing by clearly showing that there’s a path that leads to it The problem is that it doesn’t make it very clear how you’re supposed to unlock that path even though it’s practically staring you in the face.

As it turns out, it’s actually not that hard to access the waterfall area, but you will need to shuffle a few of the Pokémon that are blocking your clearest way forward.

To start, you’ll need to move the Liepard that’s lying near the waterfall out of your way. If you’re playing through the daytime version of this level, you should be able to just throw Illumina Orbs at it. After being whacked by one, the Liepard should get the hint and move out of your way.

If you’re running through Founja Jungle at night, this process is a little more complicated. As Liepard is sleeping, you’ll instead need to use the Melody function on your camera to wake them up. However, rather than wake them up directly, you’ll actually need to get both Liepard and the nearby Pikipek in the picture’s frame when you trigger the Melody function. If you did this right, then the Pikipek should fly away and Liepard should chase it.

Once you’ve made Liepard move, you just need to scan the question mark icon that appears in the spot where they were resting. That should allow you to take an alternate path that leads you through the waterfall.

One other thing that’s worth pointing out is that some players seem to be reporting that the Illumina Orbs alone do not cause Liepard to move (even if they’re on the daytime version of the level). It’s not clear what’s causing this apparent glitch, but one theory is that unlocking the Melody function may require you to use it as part of this process even if you don’t strictly have to.

In any case, you might need to use a combination of orbs and the Melody feature in order to wake Liepard up. Based on what I’ve heard so far, you really just need to hit it with an orb and then play a song to get it to move on the daytime version of the level. The night version of this area should be unaffected by whatever is causing this problem.