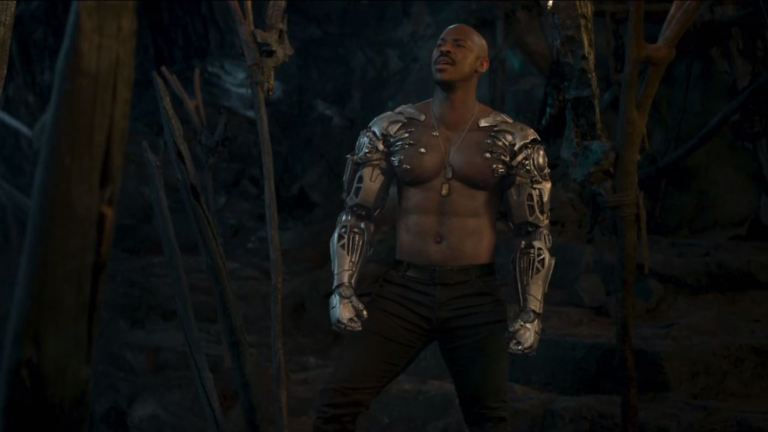 When Jackson “Jax” Briggs was introduced in Mortal Kombat II, he was Sonya Blade’s shirtless muscleman CO and, for the game, roster replacement. For Mortal Kombat 3, Midway decided to give him an upgrade, fitting the character with metal arms, but gave little explanation for the change within the story. Those bionic arms just looked cool, and if his nemesis Kano could have a cybernetic eye, why couldn’t Jax get his own gimmick?

Originally, the story behind his new arms was that Jax chose to get the cybernetic enhancements in order to better protect Earthrealm from Shao Kahn’s impending invasion. The unfortunate Mortal Kombat: Special Forces prequel also explained that Jax had experimented with prototypes over his arms to make it easier to knock out Kano’s teeth, a trial run for what would one day become a permanent upgrade.

Little did his co-creators Ed Boon and John Tobias know that a simple visual upgrade would turn into something much worse for Jax, who was doomed to lose his human arms in increasingly gruesome ways for all eternity, including in the film reboot, which is set to explain once again how Jax ended up armless.

Here are the many origin stories of Jax’s metal arms… 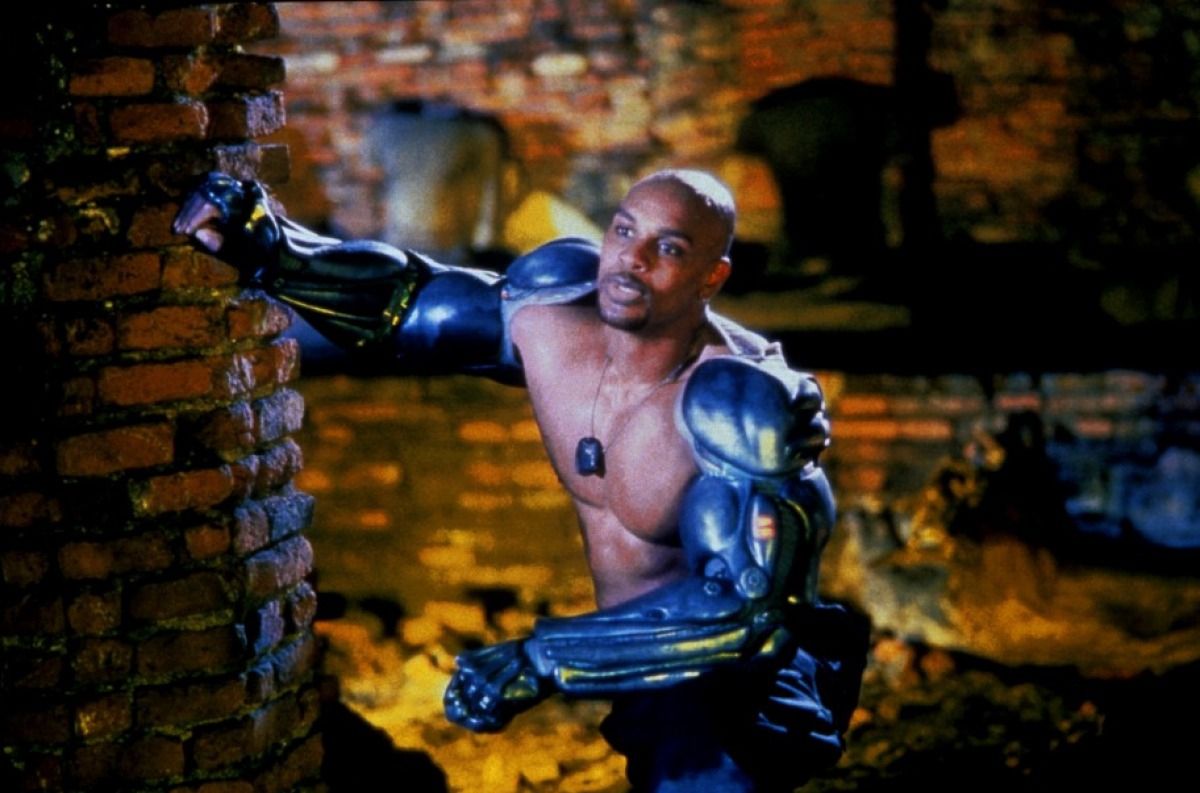 While Jax only had a cameo in the first Mortal Kombat movie, he was featured much more prominently in two tangential follow-ups. The live-action sequel Mortal Kombat: Annihilation and the animated series Mortal Kombat: Defenders of the Realm both followed the idea that Jax’s metal arms were simply add-ons. There was nothing actually wrong with his regular arms.

Interestingly enough, both of these early adaptations featured moments where Jax actually ditched his metal arms to find the strength within himself. On the cartoon, there was an episode where a member of Reptile’s race spit acid onto the arms, screwing them up for a bit and forcing Jax to rely on his own strength for the rest of the episode. In the movie, he was practically goaded into removing them by peer pressure. Raiden – an outright god – criticized Jax’s choice to use enhancements, leading to Jax later beating up Motaro with his bare hands.

Other versions of the character were not so lucky. 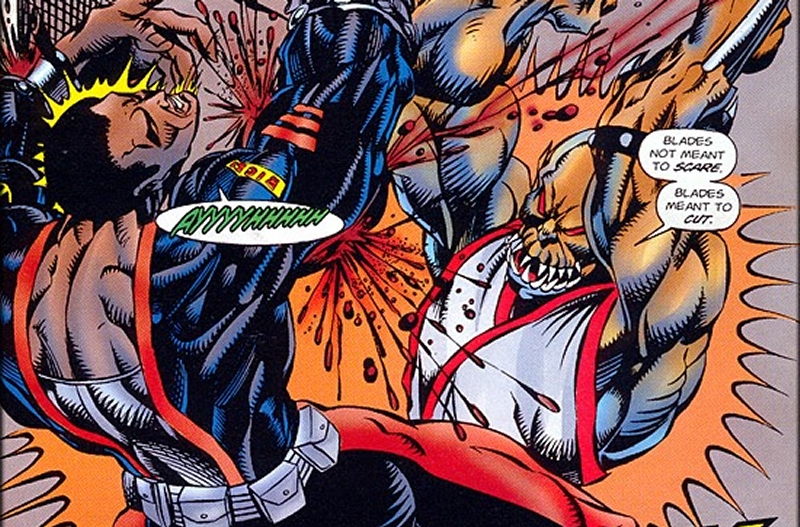 When Malibu Comics adapted Mortal Kombat in 1994, the video game sequel was brand new, with Mortal Kombat 3 just on the horizon by the time the run was over. It makes sense that the comic went with the MK2 version of Jax.

The comic book series featured very weird adaptations of the games’ stories, mainly in the way they discarded the tournament concept as soon as possible and turned everything into MacGuffin chases. This culminated in Mortal Kombat Tournament Edition 2, where Shao Kahn split the characters into the good guys and bad guys and had them play what was essentially Capture the Flag with Earthrealm on the line.

Jax was taken off the board early on in the run. Baraka was, for whatever reason, an ally and part of his team, but unfortunately for Jax, Baraka was still a savage beast and snapped due to his innate bloodlust. He turned on Jax and slashed up his arms. They remained attached, but were cut up pretty badly. Sonya suggested the possibility of mechanical replacements, which became an established part of the comics’ canon for the Special Forces crew.

Mortal Kombat 9 was both a sequel and reboot. Facing final defeat at the hands of Shao Kahn, Raiden sends his past self a message via time travel in order to prevent the emperor of Outworld from taking over all of the realms. This resulted in a detailed, alternate retelling of the first three games that turned out even worse for Raiden and friends.

In the Mortal Kombat II portion of the game, Jax wandered through Outworld and came across Ermac, the mystical, telekinetic ninja made of thousands of warrior souls. Jax made a go at him and was easily overwhelmed. Using his mind powers, Ermac straight-up blew up Jax’s arms. Sonya ran over to cauterize the wounds with her wrist lasers and took Jax back to Earthrealm for medical attention.

Later on, Jax wondered aloud whether Raiden’s actions had caused this to happen via butterfly effect. As it stands, we don’t know for sure if Ermac destroying Jax’s arms was a change in the timeline or if this was retconned into being the canon reason Jax ended up with his enhancements.

Released as a more grounded take on the Mortal Kombat mythos, Mortal Kombat: Legacy was a web series that lasted two seasons. Even though the show featured Michael Jai White as Jax, he only actually appeared in the first two episodes of the series.

In these episodes, Jax was depicted as a police officer out to catch Kano and his Black Dragon cartel. Along with Stryker and Sonya, Jax infiltrated a warehouse full of “Cyber Initiative” tech, a nod at Mortal Kombat 3‘s robot ninja subplot. Jax eventually got his hands on Kano and beat him so severely that he permanently dislodged Kano’s eyeball.

As Sonya took care of Kano’s henchmen, one of them tossed a grenade out of desperation. Jax heroically sacrificed his body by shielding Sonya from the blast. The explosion severely wounded Jax’s arms. Fortunately for him, Department of Defense had a plan to help him out on that front…

Too bad we never actually got to see White with the metal arms. 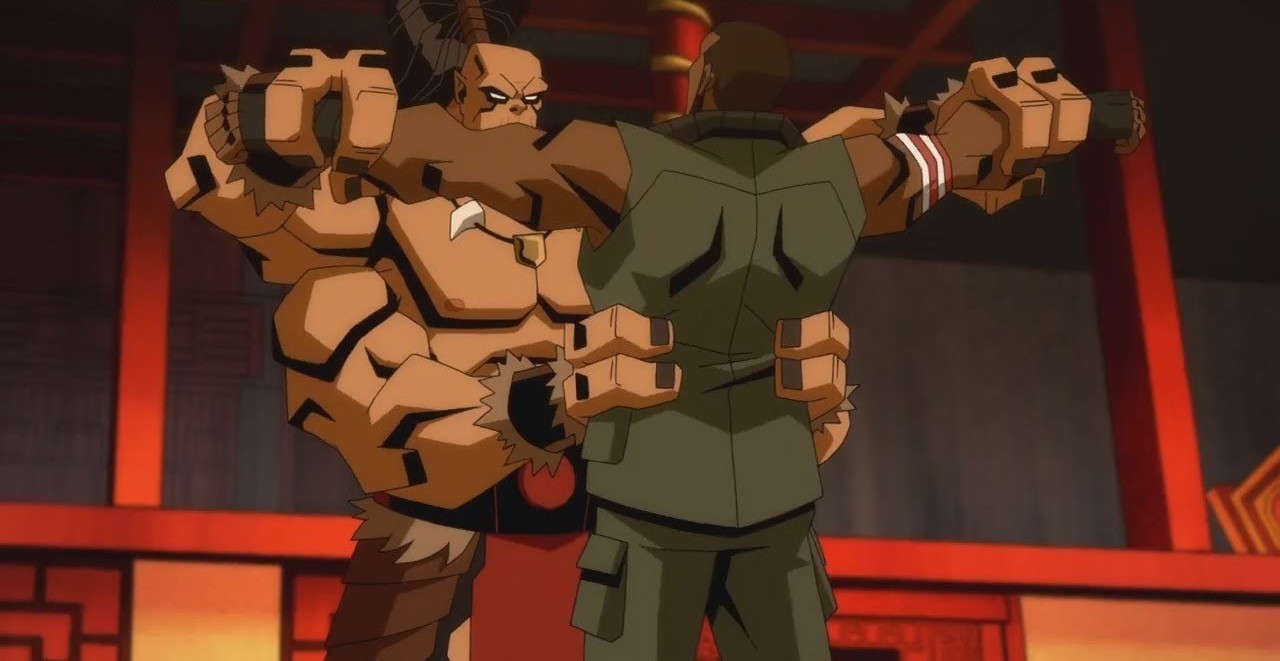 The animated film Mortal Kombat Legends: Scorpion’s Revenge was another retelling of the first game’s story, only with Scorpion as the protagonist. Prior to the tournament, Shang Tsung decided to entertain the contestants by giving them an exhibition featuring the returning champion Goro.

His opponent was Jax, who was captured while searching for Kano. With Sonya powerless to do anything but watch in horror, Jax got his ass absolutely handed to him by the four-armed giant. Playing with his prey, Goro used his four hands to grasp Jax by the wrists and hips before tugging at the limbs. All of Jax’s arms were torn off!

Only then did Raiden step in to stop further damage. Great timing, dude.

Now we have the trailer to the new Mortal Kombat film, and from the very beginning we see how violent this one’s going to be. Jax, played by Mehcad Brooks, picks a fight with Sub-Zero. Little does our poor Jax know that he’s messing with Bi-Han, the older Sub-Zero. In other words, he’s the no-nonsense asshole Sub-Zero who will one day be reborn as the sinister Noob Saibot.

After using his ice powers to negate Jax’s bullets, Sub-Zero freezes Jax’s arms and shatters them. This might very well be the most gruesome origin story for Jax’s metal arms yet. It likely won’t be the last.

The new Mortal Kombat movie is out on April 16 on HBO Max.