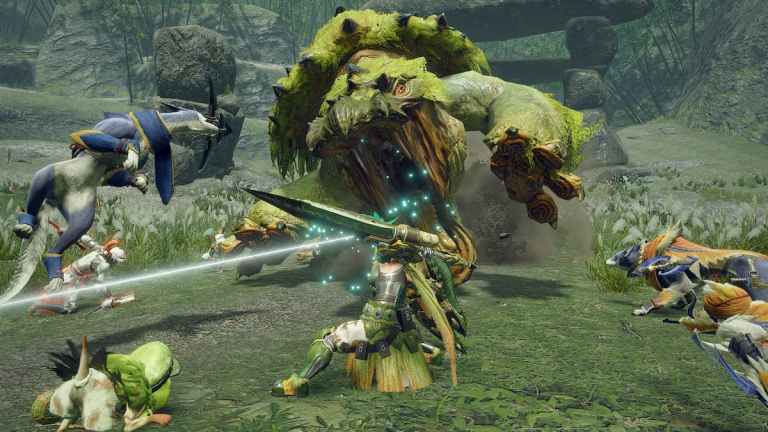 Monster Hunter Rise follows in the footsteps of Monster Hunter World by offering a larger world and other modern improvements, but the game retains one of the franchise’s best features by allowing you to adventure with friends via co-op gameplay.

Millions of fans agree that Monster Hunter is just better with friends, and it’s hard to argue that the game just feels best when you’ve got a full squad (which, in this case, is four players) by your side. Still, the benefits of Monster Hunter‘s co-op options don’t mean much if you’re not able to access them in the first place.

Here’s what you need to know about the various ways you can (and can’t) play Monster Hunter‘s co-op modes with friends.

Starting or joining an online multiplayer game in Rise is fairly simple, but it’s definitely more of a process than you may be used to.

Here’s what you’ll need to do to start an online multiplayer lobby in Rise:

Unfortunately, there is currently no way to play Monster Hunter Rise with a friend via split or shared screen co-op. This is one of those features that fans sometimes ask for, but the Monster Hunter franchise has traditionally not supported it. It’s believed that it would be a huge technical undertaking (especially on Switch) that could compromise the core experience.

While local co-op play is technically possible, accessing it will require each person to have their own Nintendo Switch. It’s obviously easiest for everyone to be playing in handheld mode when they’re sharing a room, but it should be possible to use multiple TVs if you have that set-up available.

In any case, you’ll just need to access the “Play Locally” option when speaking with Senri the Mailman Palico. You’ll still need to create a lobby, but you won’t have to deal with a Lobby ID since it’s only for your nearby friends. You also won’t need access to an internet connection or a Nintendo Switch Online account to utilize this feature.

How to Invite a Friend to a Monster Hunter Rise Lobby

There are a few easy ways to invite a friend to an existing Monster Hunter Rise lobby (or just join one yourself).

The first is through the game’s friends menu. Simply speak with Senri the Mailman and ask to access your friends list. From there, you should be able to join a friend’s lobby if they have one open. You can also ask friends to join your lobby by opening their friends list if you’ve previously set one up via the above method.

Trying to play with someone who isn’t on your list? You’ll either need to give them the Lobby ID code that was generated when you created your lobby or you’ll need to ask for their Lobby ID code. Whoever has that code will then need to go to Senri, choose the “Play Online Option,” and then input the correct Lobby ID. Just remember that you’ll also need the lobby’s password if one was created.

How to Start Co-Op Quests In Monster Hunter Rise

Rather than just throw you and your party out into the world, Monster Hunter Rise lets you pick what kind of quest your party is going to go on. Since it can be easy to overlook this feature, here’s how you access it:

Interestingly, the Quest Board also contains some Join Request options left by players who need help on quests and are short of a full party. This could be a great way to supplement your own party or just find new friends.

How to Open Voice Chat in Monster Hunter Rise

Unfortunately, Monster Hunter Rise does not support voice chat via the Nintendo Switch app. While that app is…not the best, it certainly would have been nice to have the option to use it when you’re playing with friends. There’s also no built-in voice chat option currently available in the game.

That being the case, your best option is to use Discord or any other available third-party communication service. If you’d prefer to stick with in-game communication, you are able to use emotes and text messages to quickly communicate with your party members. It’s not the best, but at least it’s something.

Playing with friends in Monster Hunter Rise is great, but it can result in some balance issues. That’s why the health pools of the game’s enemies will scale based on the number of people in your party. Here are the currently available scale figures:

The exact figures depend on the monster you’re fighting with the biggest monsters appropriately getting the biggest health bumps.

You’ll also receive more supplies at the start of each quest based on the number of people in your party, so you shouldn’t have to worry about more people making a quest substantially more challenging.