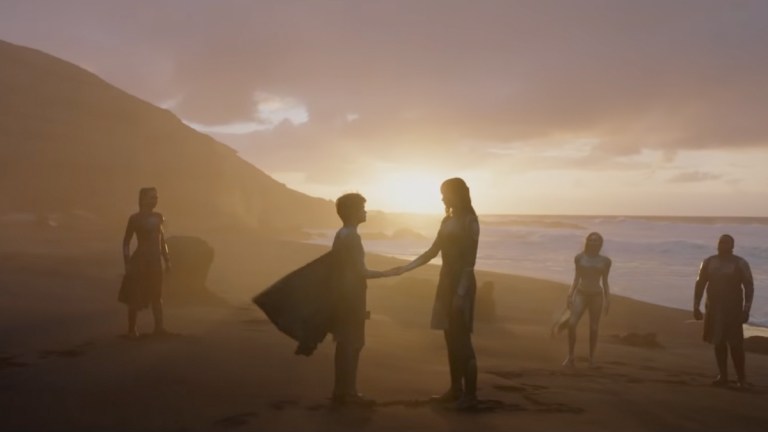 Marvel Studios released a compelling hype video on Monday containing brief glimpses of their upcoming films to get consumers excited about going to the movies again. Tucked near the tail end of that clip, after Black Window and Shang-Chi and the Legend of the Ten Rings, was the first bit of footage from one of Marvel’s biggest swings yet: Eternals.

Over the span of a truly jam-packed eight seconds, the footage finally presents audiences’ first glimpses of Gemma Chan as Sersi, Richard Madden as Ikaris, Kumail Nanjiani as Kingo, Angelina Jolie as Thena, Don Lee (Ma Dong-seok) as Gilgamesh, and Salma Hayek as Ajak. The clip also featured one more unexpected star, however, and it was a literal one: the sun!

Just about every Eternals moment in Marvel’s first look is bathed in beautiful, natural light. Normally, the presence of our Solar System’s biggest star in a trailer wouldn’t be major news. It’s the Sun. It’s always there, that’s kind of its whole deal. But natural light’s starring role in this Eternals footage comes a week after Marvel Studios head Kevin Feige praised Eternals director Chloé Zhao’s directorial style in a manner that went unexpectedly viral.

On April 28 Variety ran a lengthy profile on director Chloé Zhao, who had just made history by becoming only the second woman (and first of Asian descent) to win the Best Director Oscar. Her film, Nomadland, also won Best Picture. As part of the profile, Variety interviewed Feige about bringing Zhao aboard to direct the ambitious Eternals. Feige recalls being impressed with Zhao’s insistence on using practical locations rather than the greenscreen and visual effects that have become pervasive in superhero fare. He said Zhao and the producers cut together a sample reel to convince higher ups at Disney that practical was the way to go, leading to the following passage:

“And I had to keep saying, ‘This is right out of a camera; there’s no VFX work to this at all!’ Because it was a beautiful sunset, with perfect waves and mist coming up from the shore on this giant cliffside — really impressive stuff.” Later, watching Nomadland, (Feige) saw similar shots. “Oh! That is not just what she wanted to bring to Marvel,” he remembers thinking. “This is a signature style.”

Feige’s seemingly sudden realization that directors can have a distinct visual style and use the natural world to their advantage understandably rubbed some film fans the wrong way. Tthe Marvel Cinematic Universe is the most dominant storytelling power in the movie industry right now. The fact that the people in charge of shepherding it could overlook the importance of something as simple as a sunset is not comforting.

A more generous reading of Feige’s quote (and it’s one that I share) is simply that the producer was going to bat for his talented new director and making sure the corporate decision-makers understand the importance in leaving her alone to craft her vision. And now, based on this (admittedly brief) first visual evidence of Eternals, Feige and Zhao appear to have been vindicated.

The footage opens with a glimpse of Hayek’s Ajak that could be directly out of Nomadland itself.

Then, there are a handful of shots in which Zhao puts twilight to good use in what seems to be a very impactful moment.

Even the standard “widescreen superhero team establishing shot” looks more visually dynamic than usual due to the shadows cast by a canopy of trees.

Make fun of Marvel’s belated discovery of the sun if you’d like. But based on this brief Eternals look, it would appear they’ve at least finally found it.