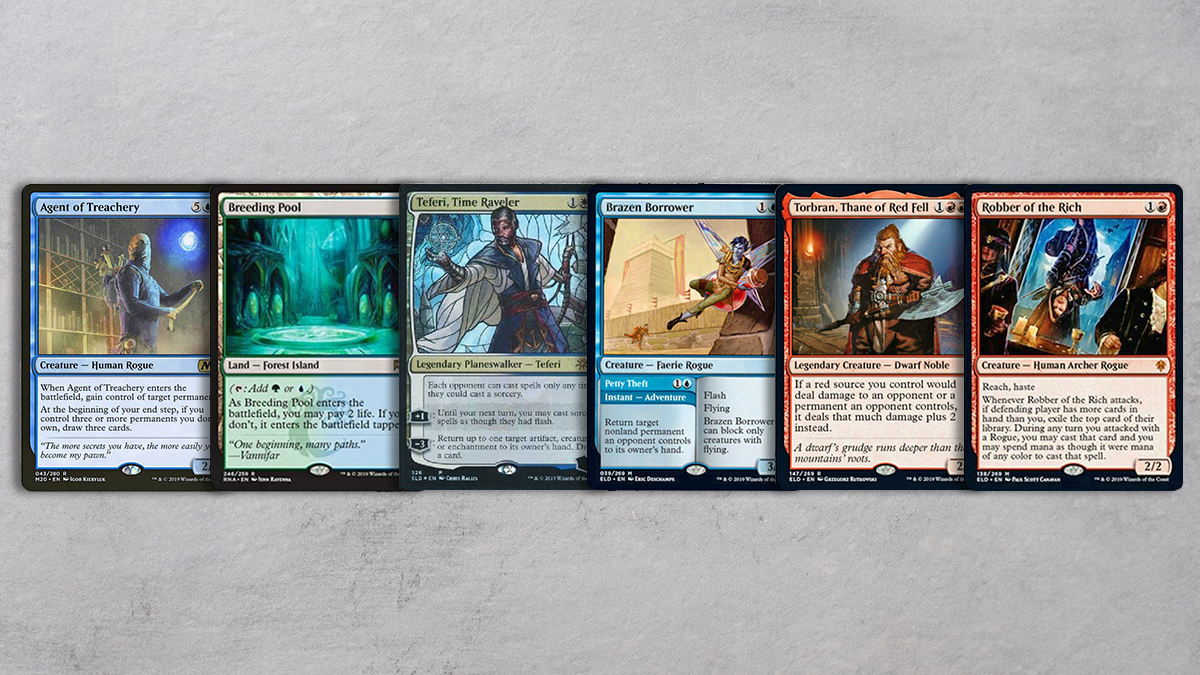 Photo: Wizards of the Coast

Although Magic: The Gathering can be an unruly beast to keep up with, there’s always a few deck archetypes in standard that are likely to appear in just about any tournament. Mono-colors like red and black are mainstays of competitive Magic and, among the multitude of strategies currently available in standard through Theros Beyond Death and Ikoria: Lair of Behemoths, some other specific builds are impossible to avoid.

These are a selection of the most common Magic: The Gathering decks you’re likely to face in the current season.

First, a disclaimer: all prices and builds are based on time of writing. Personal research is encouraged if you’re considering putting any of these entries together to find the most up-to-date versions. You can find hundreds of Magic: The Gathering single cards and pre-built commander decks in no-reserve auctions during eBay’s Commander event.

This red and black archetype has become extremely commonplace in standard in the wake of Ikoria: Lair of Behemoths. The double-color deck makes ample use of Ikoria‘s new companion mechanic, whereby certain legendary creatures can be cast from the sideboard provided the deck follows certain requirements.

The most prominent companion here is Lurrus of the Dream-Den, a Legendary Cat Nightmare who requires all your in-deck permanents to have a converted mana cost of 2 or less to be your companion. At a cost of 2 black/white and 1 generic mana, Lurrus is a 3/2 with lifelink that allows the controller to cast permanent spells from the graveyard. The usefulness of these abilities has made Lurrus a decent investment already, at around $6.79 on its own.

The other companions are lagging price-wise in comparison. Obosh, the Preypiercer is less than a dollar at the moment. Its effect of doubling the damage of permanents with an odd converted mana cost can be hard to work around.

If you find yourself up against mythic rare Kroxa, Titan of Death’s Hunger from Theros Beyond Death (worth around $21.50)alongside Lurrus you have a mighty double-header to overcome. Kroxa costs 1-red-1-black, although it has an extra escape cost, and every time the 6/6 attacks, opponents either discard a card or lose three life. If Lurrus is on the field, you may never see the end of Kroxa.

The Blood Crypt from Dissension also drives up cost, at over $15 each for the red-and-black rare land. Ikoria has brought a couple of commons that are still cheap, but may become more sought after as time goes on. Serrated Scorpion is a 1-black 1/2 that deals two damage to each opponent and gives the controller two life, and Whisper Squad is a 1-black 1/1 that can bring out more of itself for two mana.

A tri-color behemoth, Sultai Midramp involves bringing out a couple of powerful creatures that give serious advantage in standard play to their controller.

Leading the charge is the tag-team of Hydroid Krasis and Uro, Titan of Nature’s Wrath. A mythic rare from 2019’s Ravnica Allegiance, Jellyfish Hydra Beast Hydroid Krasis is as powerful as any player wants it to be, costing X-generic-1-green-1-blue, where X is the number of 1/1 counters on the creature. What’s more, you gain half X life and draw the other half from your deck. With flying and trample, Hydroid can dominate any battlefield if someone’s willing to shell out the $20 to pick it up.

Uro is another titan from Theros, and the driving force behind the high cost here. At $43 a pop, Uro’s going to cost any collector, but the reward is worthwhile if you’re looking to dominate. The 6/6 mythic rare elder giant gives you three life, lets you draw a card when he enters the battlefield and every time he attacks, and then afterward lets you put a card from your hand onto the field.


The Best Competitive Magic: The Gathering Decks of 2020


Magic: The Gathering Documentary in Production From The Toys That Made Us Studio

Coupled with sorceries that destroy permanents such as Casualties of War, a costly 2-generic-2-black-2-green that destroys a target permanent, or Extinction Event, an Ikoria rare black spell that destroys all permanents that are odd or even mana cost, these beasts are not a simple challenge to overcome.

Cavalier of Thorns, a mythic rare from the 2020 Core Set, has also been known to appear. It is a 5 converted mana, 5/6 knight with reach that discards five top cards of the deck when cast.

Always be wary of the monoliths of red and black in standard. These decks are often cheap, cheerful, and seriously irritating to play against as they weaponize inexpensive combos to put you out of business.

A rare heavy aggro black deck is currently quite popular, using the aforementioned Lurrus, as well as Ikoria mythic rare Fiend Artisan. For 2-black-or-green, Fiend Artisan is a 1/1 that gets +1/+1 for each creature in your graveyard, and has the power to sacrifice creatures to summon other creatures for the same converted mana cost. At around $17, the Fiend brings plenty of bang for the buck.

The tricky Rankle, Master of Pranks is another mainstay, a mythic rare from Throne of Eldraine floating around $12 or so. The 3/3 creature with flying and haste forces each player to discard a card, lose one life or sacrifice a creature every time it deals damage, a true agent of chaos. On the cheaper end, Ravnica Allegiance rare Gutterbones is a steady frontline troop, a 1-black 2/1 that can be returned from the graveyard to your hand any time you can play a sorcery if your opponent has lost life. At $2.50, you can have a full platoon without breaking the bank.

Another easy mark is Ayara, First of Lochtwain, a rare Elf Noble from Throne of Eldraine that gives the controller one life and takes one life from all opponents whenever a black creature is cast on their side. For $2, she’s at a good price along with fellow affordable Eldraine alumnus, Murderous Rider, who goes to the bottom of your deck when killed in battle. Where the zombie knight is really useful, however, is the ability to be exiled to destroy any creature or planeswalker for 1-generic-2-black and the additional cost of two life. A decaying soldier in blackened armor ready to self-destruct to take down the enemy for just under $3 – Murderous Rider is a real nuisance at a bargain.

If you fancy dipping your toes into the chaotic world of commander, Tymna The Weaver is likely what you’ll be up against. Under commander Tymna The Weaver, who has the option for a partner, this four-color engine of destruction gets a lot of fun out of the whirlwind format. Tymna herself allows you to pay life in your post-combat phase to draw cards, while a small rotating cast grants a range of powers depending on the mood.

Kraum, Ludevic’s Opus, from Commander 2016, is a flying, haste 4/4 that lets you draw a card every time an opponent casts a second spell. Thrasios, Triton Hero is a 1/3 who lets you peak at the top card of your deck and either put it into play or your hand.

But of course, the real attraction to building in commander is assembling the arsenal of creatures and spells. Only one of each means you want everything to pack a punch, and this deck packs some right hooks.

Mythic rare Snapcaster Mage is a regular. This 1-generic-and-1-blue 2/1 with flash gives a sorcery or instant in the controller’s graveyard flashback until end of turn and commands over $46 per card. Kalitas, Traitor of Ghet from Oath of the Gatewatch is a vampire warrior that turns opponents’ attacking creatures into zombie tokens if you can muster the $25 price-tag.

Tri-color mythic rare dragon Nicol Bolas, The Ravager, a flying 4/4 that can be resurrected, is another $25-or-so beast, and Stoneforge Mystic, a Worldwake rare who allows you to cheaply play equipment from your hand, standing at $40.

Some of the spells that bolster this archetype are Teferi’s Protection, a 2-generic-and-1-white instant that protects you from all colors, while costing $38 for the pleasure. Vintage counterspell Force of Will, which runs over $125, and black card-drawing spell Tainted Pact, not often found below the $70 mark, are also powerful additions.

Final Fantasy 7 Remake Review: A Love Letter to the Original

An array of Planeswalkers are employed too; Liliana, the Last Hope of Eldritch Moon, who de-powers creatures and returns them from the graveyard, is no cheap hire at $40, but creature-changing Oko, Thief of Crowns is at $15. To go all out, Jace, The Mind Sculptor from Worldwake is hard to beat. With the power to exile an opponent’s entire deck, he’s $90 well spent.