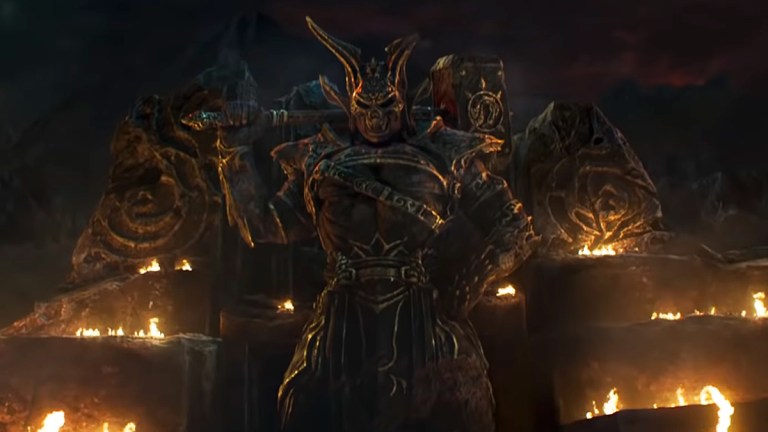 The Mortal Kombat reboot released a trailer that carries out an action-packed assault on the senses while showing clear respect to the iconic ultraviolent video game franchise in R-rated splendor for HBO Max. Yet—as all good trailers tend to do—it’s also stoking its share of curiosity, notably about the film’s villain dynamic. While Chin Han’s Shang Tsung is the clear big bad, the trailer briefly shows what appears to be the image of an even bigger bad, Shao Kahn.

While one might initially dismiss the notion of Shao Kahn—the hulking, helmeted Emperor of Outworld and signature villain of the overall franchise—being in the reboot as not a big deal, such a notion would be a reversal from Mortal Kombat’s last official synopsis, which refers to Shang Tsung as “Outworld’s Emperor Shang Tsung.” It’s a potent line that represents a major alteration from the game continuity, and seemingly eliminates Kahn’s presence, at least for this film. However, just as the viewer attempts to recover from the spectacle of Sisi Stringer’s unmasked Mileena licking blood off one of her signature sai, the trailer switches to the shot of a statue—one that clearly depicts Shao Kahn, armed with his signature War Hammer. So, what’s happening here?

Of course, feature-debuting director Simon McQuoid’s usage of Shang Tsung—an ancient shapeshifting, soul-stealing sorcerer—as Mortal Kombat’s villain is appropriate, seeing as he was famously featured as the final boss of the franchise-launching 1992 arcade game, and main villain of the 1995 original movie, in which he was played to perfection by Cary-Hiroyuki Tagawa. Yet, he was traditionally depicted as the Earth-set steward of the Mortal Kombat tournament, and a subordinate—both in hierarchy and raw power—to Shao Kahn, who sat on a throne as the oppressive emperor of other-dimensional Outworld. The reboot synopsis’s intriguing description of Shang Tsung as Outworld emperor seemed to therefore indicate that Han’s version of Shang Tsung was set to be a trope amalgamation of the two key characters. Thus, the clear indication that Shao Kahn exists—or once existed—in this continuity throws a wrench in those works. 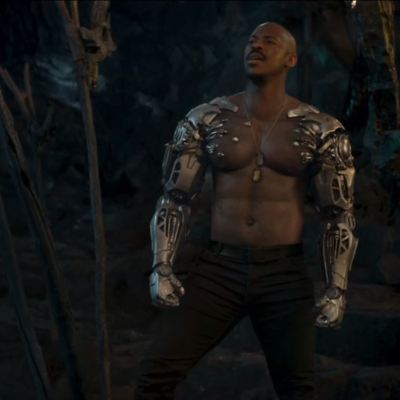 
Mortal Kombat: The Many Ways Jax Got His Metal Arms 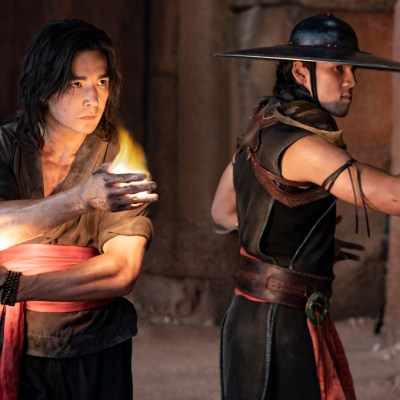 
How the Mortal Kombat Movie’s Main Character Renews the Franchise

The imposing presence of Shao Kahn first hit arcades as the final boss of 1993’s Mortal Kombat II, showcasing a menacingly clear contrast (thanks to bodybuilder Brian Glynn as the photographic sprite,) from the game’s predecessor, in which final boss Shang Tsung was depicted—acutely inspired by Big Trouble in Little China’s David Lo Pan—as an elderly, long-bearded baddie who eerily floats back and forth across the screen hurling hit-juggling fireballs, with the ability to temporarily change into any character from the game. Indeed, Kahn—and debuting Goro-esque four-armed sub-boss Kintaro—upped the ante immensely from the first game, both in spectacle and quarter-draining difficulty, punching and shoulder-blocking players into oblivion. Moreover, in a move that demonstrates just how much of a final boss upgrade Kahn represents, Shang Tsung was brought back in the sequel relegated to being a regular playable character, this time with magically restored youth that allows him a more conventional move set of sweeps, uppercuts and jump-kicks.

The celebrated 1995 Mortal Kombat movie managed to squeeze Shao Kahn in for the closing, sequel-teasing scene, in which a monstrously enormous (barely-recognizable) version of the character—vaguely only referred to as “Emperor”—emerges from the backdrop to threaten (with the voice of actor Frank Welker,) the assembly of heroic fighters. Yet, he would be brought down to Earth—literally and figuratively—as the main villain of 1997 sequel, Mortal Kombat: Annihilation, played in normal, non-imposing form by veteran action film player Brian Thompson. While we won’t get sidetracked on the ever-potent topic of how that sequel became an aimless trainwreck of a film featuring a fecklessly curated clown car lineup of poorly-adapted game characters, the ‘90s films, did—for all their sins—keep Kahn’s designation as Outworld Emperor.

Kahn would again be depicted in live-action form on the 1998-1999 syndicated television series, Mortal Kombat: Conquest, played by Jeffrey Meek, who—in a manner that seemingly evokes Annihilation’s pointless sibling twist—also fielded the role of Raiden. Additionally, Aleks Paunovic played the character on the 2011 web series, Mortal Kombat: Legacy, which was a well-regarded adaptation that, at one point, was on the cusp of inspiring a reboot movie effort of its own.

Nevertheless, the groundwork for Shao Kahn’s presence in the new Mortal Kombat cinematic canon appears set to be laid onscreen, albeit in marble and under a mysterious context. While that might seem premature, given what we know about the traditional story, the statue could merely be a provocative Easter egg designed to signal the film’s wider franchise-launching aspirations—not necessarily that Kahn will be in this film physically. Yet, Shang Tsung’s status as Outworld Emperor won’t likely stop Shao Kahn (perhaps as a reemerging ancient threat,) from somehow muscling his way in on the action for a prospective sequel, in which he’d presumably bring his devastating array of attacks, and an even more devastating treasure trove of trash talking.