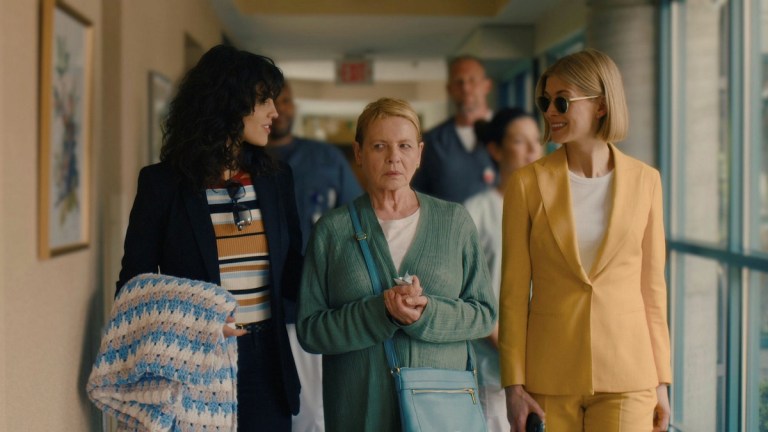 Two utterly despicable people go head to head in the buzzy new crime comedy that’s just landed on Netflix (and Amazon Prime in the UK). In it, Rosamund Pike’s angelic-looking court-appointed guardian Marla Grayson exploits and destroys the wards in her care by forcing them into nursing homes against their will, selling off their assets, and alienating family members. She is a monster in a perfect white suit, with a haircut so sharp you could shave with it.

But she might just have picked the wrong mark. Tipped off by her corrupt doctor mate Dr. Amos (Alicia Witt), Marla targets a woman called Jennifer Peterson (Dianne Wiest), a very independent person who appears to have loads of money and no family at all – a ‘cherry’ as Marla and Amos call her. Big mistake.

Jennifer isn’t who Marla thinks she is and now she’s incurred the wrath of her son Roman, played by Peter Dinklage. Roman is a callous baddie, who thinks nothing of the deaths of three of the mules he’s using as part of his smuggling operation, kills off Amos without a care, and attempts to kill Marla – he’s a dangerous man. While the head to head of Marla and Roman makes for great tension, the third act of the film sidelines a character who might just be fiercer than both – Jennifer herself (not her real name).

When we first meet her, she’s forcibly being taken into care by Marla and the cops at heel. She’s resistant but doesn’t put up a physical fight other than insisting they don’t touch her. In the home, she does not acquiesce, does not learn helplessness, and fights back until the staff pump her with more and more sedatives.

Even drugged to the eyeballs, ‘Jennifer’ is powerful and terrifying – Marla has clearly underestimated her. When she grills her newest ward about who she is and what the taxi sent to the house was about Jennifer tells Marla she’s made the biggest mistake of her life.

Weist’s Jennifer displays a different kind of power to Marla and Roman. Marla uses the courts and her corrupt personal contacts to get her way; Roman uses money and violence. Jennifer’s power is quiet, calm, stoic, and personal.

Wiest is a terrific actress. She’s won two Oscars — Best Supporting Actress for Bullets Over Broadway (1994), and Hannah and Her Sisters (1986) — as well as many more awards, and she might be best known to some audiences for her sympathetic maternal roles in movies like The Lost Boys, Parenthood, and Practical Magic. So it’s even more electric in I Care a Lot when she turns.

Jennifer is not about to help Marla or give her anything. She laughs when she realizes she’s missed the appointment with her son. When Alexi (Nicholas Logan) arrives to break her out, she’s not flustered or alarmed by the hail of bullets that accompany him — in fact she thinks it’s about fucking time — and cares little about the casualities that come from her attempted break out.

While Roman’s diminutive stature might have caused people to underestimate his power and influence, and Marla’s pretty-girl pristine appearance allowed her to get away with heinous crimes, Jennifer’s little old lady status is her disguise. She is not a pushover. When Marla threatens her the first time, Jennifer tells her to do her worst. Later when Marla taunts her about the torture she will subject her to, Jennifer quietly stands, walks around Marla’s chair, and proceeds to strangle her. She is not afraid, she will not be intimidated, she will not let Marla win. Where do you think Roman gets it from?

That’s why it feels like a shame within the structure of the movie that Jennifer isn’t an active part in her own escape. That ultimately she has no agency. By the third act, she’s almost entirely off screen having been confined to a mental facility. In a movie about the incredibly awful treatment that older people can be subjected to when their autonomy is removed by well-meaning but misguided court rooms, we’d have loved to see Jennifer fighting back, taking charge, and having her own victory moment rather than relying on Marla’s greed and Roman’s bullying. Screw those two, we are team Jennifer all the way.

Perhaps, though, this slightly frustrating sidelining is fitting for a movie about how deeply unfair it is to take away a person’s power. While we desperately want to see Jennifer breaking out, destroying Marla herself, and leading a glorious exodus of newly empowered wards who take over the city, the justice system, organized crime, and the rest, in a euphoric paene to the power, resilience and resourcefulness of the older generation, this isn’t that movie.

That arguably the film’s fiercest, most formidable character can’t even help herself is the biggest kicker in a movie about a system which is Kafkaesque in its nightmarish bureaucracy. It’s a depressing message that it’s virtually inescapable for even the smartest, richest, and most powerful patients once they have lost their own power of attorney. There’s an alternate movie where Jennifer would have this banged to rights – I Care A Lot 2, anyone?

I Care A Lot is available to stream on Netflix (US) and Amazon Prime (UK).