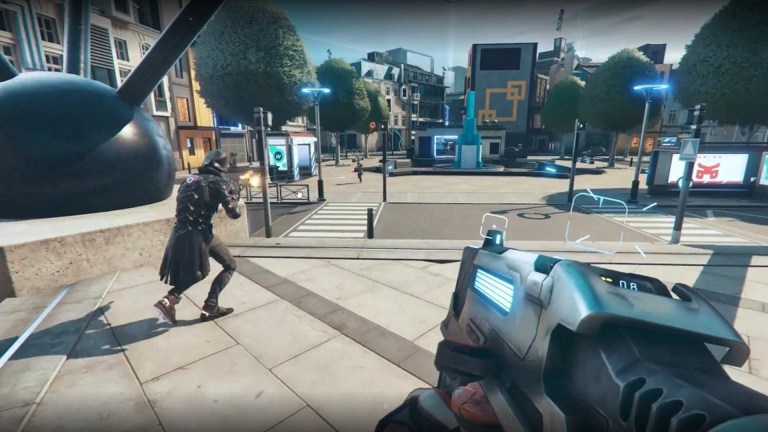 Ubisoft has confirmed the existence of a new game called Hyper Scape, which is reportedly a battle royale title being developed in collaboration with Twitch. The game and its impending announcement were leaked on Twitter before Ubisoft confirmed its existence.

The confirmation came in the form of a teaser site launched by Ubisoft promoting an in-universe company called Prisma Dimensions. The site includes a message from Prisma Dimensions CEO “Dr. Ivy Tan” describing her company as a “hyper-network” and “the world’s leading multinational technology, media, and service company.” The message teases how Prisma Dimensions has built on Mathieu Eiffel’s “early work on direct neural stimulation.” Prisma is apparently the creator of “the Hyper Scape.”

The site also seems to announce the game’s first mode, which is called “Crown Rush.” It definitely sounds like a version of the traditional battle royal experience. Check out the description:

“Get ready to drop into the neon-drenched streets of the world’s premiere virtual city, Neo Arcadia,” reads the game’s website. “You’ll want to hit the ground running, as you’ll need every advantage you can find to give yourself a leg up on the competition. Only the best contenders will make it to the final showdown. Will you claim victory, or fall to the perils of the Hyper Scape?”

The site teases that more about Hyper Scape and Crown Rush will be unveiled on July 2.

The game was first leaked by esports industry insider Rod “Slasher” Breslau (via IGN), who reported that the game will incorporate Twitch chat to “directly impact the game live with game-changing events.” Breslau said that the game is being developed by Ubisoft Montreal and that it’ll be released on PC and consoles, with cross-play functionality.

PC Mag editor Kevin Sebastian (via Eurogamer) posted additional screenshots of Hyper Scape and said that the game is free-to-play and will begin an open beta period on PC on July 12. The console version will release at a future date, according to Sebastian.

Well @HyperScapeGame is going to be revealed. It's a FPS Battle Royale from @UbisoftMTL launching on July 12th. Hyper Scape is being built with streamers in mind in a full partnership with Twitch. Twitch chat will supposedly influence some game mechanics. pic.twitter.com/mwVfs3nUEt

The site also has a sign-up button at the bottom “to be the first to discover the Hyper Scape.” It’s active now so you can register for updates.

Ubisoft, best known these days for sprawling open-world action-adventure titles like Assassin’s Creed and Far Cry, has made a big push into competitive multiplayer games in the last few years with new entries such as Rainbow Six Siege and For Honor. The publisher has also put a bigger emphasis on multiplayer shooters with franchises like The Division and Ghost Recon. It was really only a matter of time before Ubisoft jumped into the battle royale genre, which remains incredibly popular, especially on Twitch.

We’ll keep you updated as we learn more about Hyper Scape.