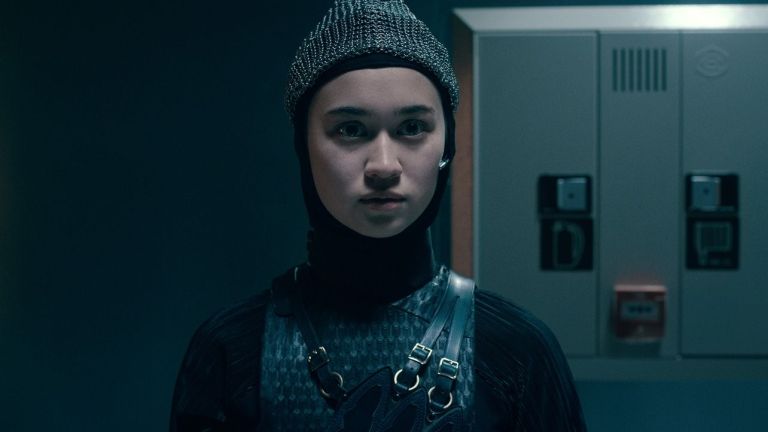 When I first saw Warrior Nun pop up in my “coming soon” feed on Netflix, I was intrigued. The synopsis was interesting, the cover art looked cool, and the teaser trailer was fun. I added it to my list and asked to be reminded because it looked so very good, and so very gay.

These days, it’s fashionable for shows to include characters from various marginalized communities. When meaningfully represented, this diversity can not only give visibility to marginalized people who are used to seeing their very real identities reflected in popular media, it gives everyone a lesser-known story and/or perspective to explore. Unfortunately, oftentimes, these attempts at representation feel like ticks on a checklist, rather than meaningful inclusions. Instead of fueling the story and deepening the character, people’s identities—Gay, Latinx, Disabled, etc—are reduced to points on a diversity score card. There’s a fine line between making a character’s identity the sole focus of their story, and not engaging with that identity at all within the narrative.

If you had searched Warrior Nun on Twitter a few days before release, you would’ve seen many excited tweets about how beautiful the cast is, and how gay it was expected to be. Perhaps its was the use of neon purple in the trailers and promotional art (purple is a queer color, and is very commonly associated with the LGBTQIA+ community—it’s the color queer folks and allies wear on Spirit Day to celebrate and show support for queer youth), or maybe it was the… everything about Shotgun Mary in the trailer? Whatever it was, this show felt queer.

So, imagine the disappointment when, instead of watching the Sister Warriors mack on each other, or Shotgun Mary avenge her slain lover, we had to sit through several episodes of Ava and JC’s terrible, horrible, no good, very bad, heterosexual flirting. In the process, Warrior Nun didn’t just not give us the gay content we expected, it hid it’s one queer character.

In episode 8, “Proverbs 14:1,” the sisters learn about Adriel’s bones from the journal, and begin to plan a way into his tomb. Beatrice helps Ava train to phase through walls, and when it becomes too difficult for Ava, they’re directed to a story in the journal. Beatrice reads the story of Sister Melanie, a Warrior Nun who had at one time been interned at Dachau concentration camp during World War II, because she was gay.

The story recounts the time Sister Melanie slaughtered a room full of Nazis, in a fit of rage, then transcended past her own fear and anger, which caused the halo to unleash an immense amount of power. Beatrice is particularly affected by Melanie’s description of the moment, “I felt unbound. Unburdened. I felt finally myself.”

Watching Kristina Tonteri-Young’s performance, it was immediately clear to me that Beatrice relates to Sister Melanie, because she herself is queer. Once that was apparent, I looked to the show for confirmation, or exploration of that fact. In a later scene, Beatrice, in tears, tells Ava that she is “different,” that she tried to be “normal,” and that pain made her a nun. She comes out to Ava, but she never says “I’m gay.” Beatrice’s queer reveal is left ambiguous, and the lack of specificity about her sexuality is a disservice to the character, and to viewers.

I asked showrunner Simon Barry if Beatrice was queer, and if that would be explored more in the story going forward. He had this to say about it: “We were intentionally linking the story of Sister Melanie, who is definitely a gay nun from World War II, to Beatrice’s connection to her own back story and the reason she became a nun and felt that she had to abandon her family.” But we viewers don’t know Beatrice’s full story, so we can’t recognize the parallels.

In episode 3, “Ephesians 6:11,” Beatrice tells Ava how she came to be in the Order. She says her parents are politicians, concerned with appearances, and that she wasn’t “falling in line” so they shipped her off to Catholic school. When Ava says “there’s more to it than you’re telling,” she only says, “there’s always more.” This is a queer story. This is a story queer people can identify with, and relate to. But, the way it is told, it is not a uniquely queer story. It isn’t an explicit acknowledgement that Beatrice is queer.

Barry continues, “We love that Beatrice could represent that, and Kristina who plays her did an amazing job with that scene, and that theme of being made to feel different, and how that motivated her to do things and see her rise differently.”

Beatrice, up until this point, hasn’t represented anything. We know she comes from wealth. We know she is well-educated and fluent in several languages. We know her parents sent her away to school. But we don’t know Beatrice is queer.

Ambiguity surrounding characters’ sexual orientation is a tactic often used by writers to suggest queerness where there is no intent to follow through. Queerbaiting is real, and it’s harmful to viewers who want meaningful explorations of characters whose identities they share. Beatrice and Ava’s longing looks at one another can be called queerbaiting, because at any moment, the writers could say, “this wasn’t a romantic thing, it’s about sisterhood.” And because neither Beatrice or Ava have made any explicit exclamations of queerness, that wouldn’t be contradictory.

“If we get a season two,” continues Barry, “it would be awesome to continue down that road and really dig deeper, of course. I think we have to honor our characters in that way, by being honest about not only who they are, but why they are the way they are, and we would certainly be missing an amazing opportunity for character building and storytelling if we didn’t see more of that too.”

If I’d had more time, I would’ve asked why something so integral to the character—by his own admission—was left for a later season that isn’t promised. Beatrice’s story is a much more accessible entry point into the world of the Sister Warriors than Lilith’s or Mary’s. And with the focus on sisterhood, choosing not to center Beatrice is a missed opportunity to explore the notion of found family with an openly queer character. Warrior Nun shows us a world where women can be nuns who wield swords and fight demons, which is only groundbreaking if you believe women can’t be warriors. Allowing women to be who they are, to be queer, to be gentle, to be cold, to be unrepressed. That’s the real subversion.