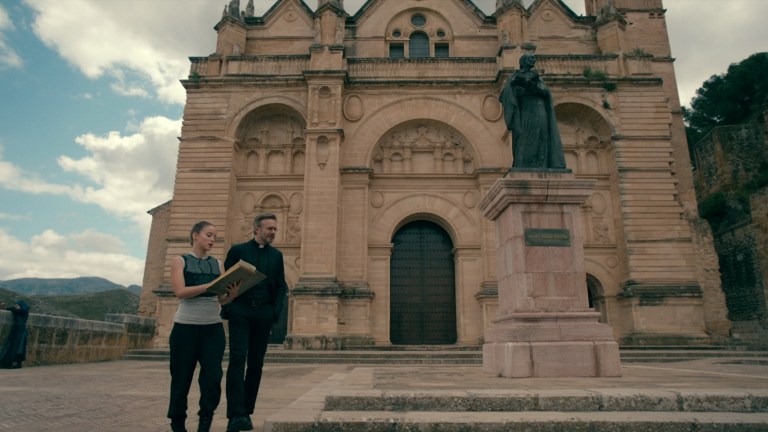 We’ve seen nuns kill a gospel medley, but not a bad guy. Fighting demons and assorted baddies isn’t exactly new, but doing it in a full habit is something we haven’t seen on television before. Buffy and the Winchesters take two different approaches to fighting evil, but Warrior Nun answers the question of what happens when we weaponize women of the faith.

Warrior Nun Areala, the manga-style comic book source material on which Warrior Nun is based, follows Warrior Nun Sister Shannon Masters and her friends in The Order of the Cruciform Sword as they fight the forces of evil. Barry says what attracted him to the comics was the “mythology of the warrior nuns order and the battle between good and evil. And the fact that there were women at the center of it.” Women-led, evil-fighting teams are still fairly uncommon on TV, despite the fact that Buffy and the Scoobies graced our screens over two decades ago.

Barry also says he liked the attitude the comic presented. “It was a little bit raw. It was a little bit in your face and it didn’t apologize. So, in a way, you could have some fun. It wasn’t taking itself super seriously, even though it was dealing with the gravitas of religion.”

Adapting a property presents unique challenges for creators, who have to decide how much to adhere to the source material. With Warrior Nun, Barry treats the comic book as more of a foundation, opting to craft a unique story around the basic premise. “We really didn’t feel like— we didn’t want to branch off of that and replace anything. We wanted to have our own little universe going.”

Consequently, Warrior Nun is more of a spiritual successor to the comic, rather than a direct adaptation or replacement. “I think that we’ll probably exist in parallel universes hopefully, if we get to do another season, or if anything else comes out of our journey, but I don’t really want to tangle with the world of the comic book universe in a way that is contradictory or anything like that, so I think we’ll live in our own space.”

Ben Dunn, who created the comic, did have a chance to confer with writers during production, and to visit the set. “We had him on a video conference in the writing room, where he really was giving us his best wishes and giving us, I guess, his blessing in a way, to go forward. Then he came to Spain with us when we were shooting, to see how a TV show works and all the madness of the film set. He was very keen to do that and very keen to learn that process.”

Dunn knew the TV show would be a departure from the comics. “For him I think it was a way of sending us off on our journey, which is independent, in a weird way, of his.”

Barry makes it very clear that the show and the comics are completely different entities. Still, we wanted to know if there were any specific things from the show pulled directly from the comics… “With characters like Shotgun Mary and Sister Lilith, we were very much inspired by the comic in terms of how they’ve put those women forward and their defining quality,” says Barry. “There were elements, I guess you could call them, that were inspired from the books that we felt like were a perfect fit for what we were doing in the television show.”

Warrior Nun perhaps doesn’t have enough fun with its source material. Asked whether there are any Easter eggs, Barry has only broad examples. “If someone who knows the book is watching the show and they realize that we have this character Lilith and what happens to her, they may have a sense of what’s going to happen to her.” There is room, even in a loose adaptation, to have fun with the fact that comics are a visual medium that offer opportunities to recreate iconic images, which honor the art, and are a treat for comic fans.

Both the Warrior Nun Areala comic and the Warrior Nun show utilize Catholic mythos and iconography to tell their stories. The comics treat the Church as a definitive force of good whereas the show allows for nuance and individual interpretation. Asked how they navigated that nuance, Barry says “It was really about the individual characters, making decisions that would then place them on either the good or the bad side. It didn’t matter where they came from or what they were doing.”

He continues: “We early on decided that we weren’t going to make comments on the good and evil of the show as it related to a giant organization or institution, we really wanted to focus on characters. Our characters would either be good or bad. If you wanted to define the institution based on the character, you have that option as a viewer, but we weren’t necessarily making a blanket statement or painting it with a broad brush.” It’s up to viewers to decide who’s good or bad.

Additionally, every episode title is a Bible verse, which gives the audience another way to engage with the show. “The audience could then go into their phone, or their iPad or computer and look up what that verse was referring to, and get a little insight into where we were coming from.” Asked which came first, the title or the script, Barry says: “We wrote all the episodes for the most part before we picked the titles. Then we were in this place where we were trying to figure out what titles would be appropriate.” One well-versed in scripture may be slightly spoiled by the episode titles —take episode 1 title, Psalms 46:5, “God is within her, she will not fall; God will help her at break of day.” But mostly they express a vibe, not a plot point.

Warrior Nun was filmed on location in Spain, which was chosen because, Barry says, they “wanted to make the show in a country that has a lot of history, that was connected to religion and connected to the history of what we had invented, or what the books had invented, which was the Warrior Nun sect.” Barry continues: “Visually, Spain just has all of these amazing Gothic and Neo-Gothic and Pre-Gothic churches and you feel that you can’t escape. It’s everywhere. It’s sort of the looming history of Christianity. It’s great because it really gives a weight to the religious part of the show and the stakes of the show, which is good and evil, heaven and hell.” 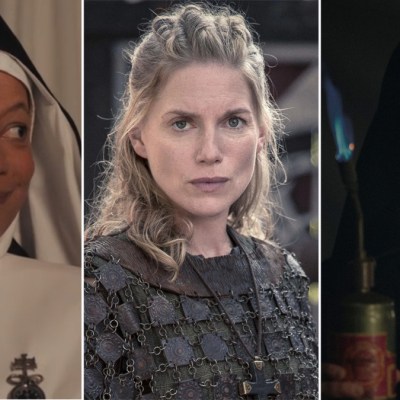 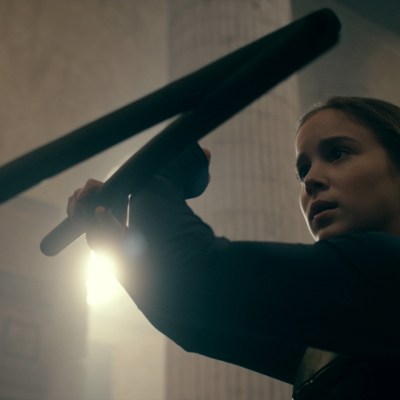 For a show that borders on blasphemous, Warrior Nun takes surprisingly few risks. There is a scene where Sister Beatrice is recounting the story of an explicitly gay Warrior Nun from WWII. Beatrice is clearly, if subtlely moved by this, but the show never goes as far as confirming her queer identity. When asked if this is an appropriate read of the character, and whether Beatrice’s sexuality would be addressed going forward, Barry says: “If we get a season two it would be awesome to continue down that road and really dig deeper, of course. I think we have to honor our characters in that way, by being honest about not only who they are, but why they are the way they are, and we would certainly be missing an amazing opportunity for character building and storytelling if we didn’t see more of that too.” Planning to explore a characters queer identity is okay, but establishing their queer identity, explicitly, is better.

As mentioned in the Den of Geek review, I found Ava’s internal monologue to be distracting at times. Barry admits the creative team hadn’t originally planned for voiceovers, but incorporated them into the series because of concerns that “that there might be a problem with the audience understanding everything that was going on at the time they needed to.”

“We’re packing so much information into the first few episodes,” continues Barry, “getting a sense that Ava was a person, not just reacting. It really was to try and help the audience jumpstart their relationship with Ava.”

While we may disagree on the necessity of the use of voiceover in Warrior Nun, what is inarguably necessary is for the show to have a point of view. For Barry, it was important that the show reinforce the notion of sisterhood. “I like, personally, shows that I can’t forget, and that surprise me and that entertain me. We’re obviously not a show that sees religion as something that we’re trying to use as a weapon or as a philosophy. We’re a show that’s really about sisterhood. At the end of the day, this show, really I would love it to be known as a show about how strong women are stronger together, and how they can overcome challenges, whether they be supernatural or personal, in a way that they’ll have our friendship and our support and unity. That was the guiding principle of the show.”

Warrior Nun is not just about sisterhood. It is a show where angels and devils are real, magic exists, and the stakes are high. The world is counting on the OCS to keep evil at bay, and the show so far only scratches the surface of its storytelling potential. Given that, season one ends on a cliffhanger. A confident choice, considering the show has not been picked up for a second season at the time of this writing. Thankfully Barry has plans for next season.

“We’ve thrown a lot of ideas around about where the show could go at the end of the season, of what we want to do next season. Having made several shows, I know that all of these things change as you go. Depending on how the show plays and how the audience reacts to it, you end up changing some of those ideas and rethinking them, so I don’t really want to say anything specific about that because I know that season two, if we’re lucky to get one, could redefine the show in ways that might change that.”

Snowpiercer Episode 8 Review: These Are His Revolutions

Barry seems hesitant to make any definitive statements about the future of the show, leaving us to wonder what he has up his sleeve. Whether or not the show continues— and we hope it does— one thing is abundantly clear, binge watching Warrior Nun should be your next bad habit.