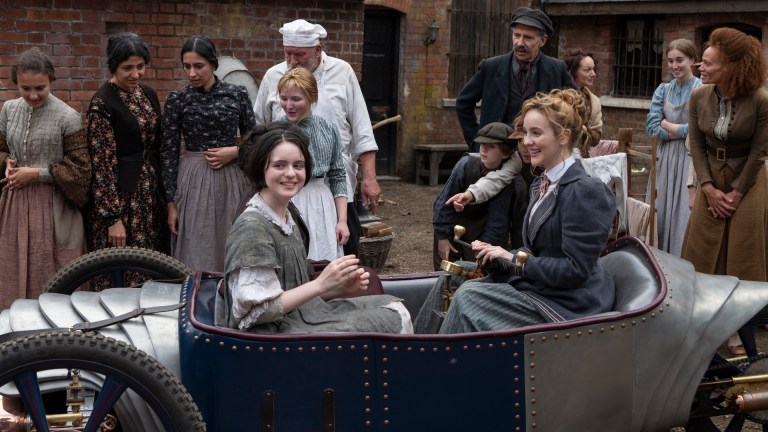 For a show called The Nevers, HBO’s latest fantasy endeavor doesn’t say no to a lot.

The series, developed by erstwhile TV titan Joss Whedon, brings quite a few competing elements to the table. For starters, it’s set in a steampunk version of Victorian-era London. Ladies wear corsets, men wear bowlers, and everyone wears the same dour expression as they smell the rancid air around them.

Then, in addition to its steampunk leanings, The Nevers goes full on X-Men with its hook. Due to a mysterious event, a sizable percentage of London society (though predominantly women) have developed supernatural mutant-like abilities. Lead character Amalia True (Laura Donnelly) is precognitive, briefly experiencing certain events before they happen as a warning. Her closest friend Penance Adair (Ann Skelly) can sense the potential energy within objects, leading her to create fantastical inventions like an old-timey quartermistress.

Amalia, Penance, and many more of these superpowered individuals reside in Charles Xavier’s ma…we mean Lavinia Bidlow’s (Olivia Williams) Orphanage. Just like in Professor X’s world, Amalia, Penance, and their kind are viewed with suspicion and distrust. In fact, the uniquely abled of The Nevers’ world are referred to as “The Touched.”

The word “touched” is dripping with historical resonance. The term can indelicately refer to someone who is perceived as crazy. The Nevers leans so far into this interpretation of the word that it nearly falls over. Several of The Touched are carted off to Victorian era lunatic asylums, some before they even exhibit supernatural abilities like series antagonist Maladie (Amy Manson). Even those who are allowed to remain behind in polite society are viewed as untrustworthy and unserious, which surely sounds familiar to many a gaslit female viewer even today.

The Nevers is the latest in the long line of fantasy series that wears its themes on its frilly Victorian sleeve. The storytelling goals of the show are so apparent that one may wonder why any of the supernatural elements were necessary, when a far more literal interpretation of 19th Century Western society may have sufficed.

“They say that when something rhymes, it sounds more true to the human ear,” Donnelly says. “I think there’s a similar thing that goes on a lot of the time with fantasy. You can, in fact, explore fundamental human truths and it will feel even more true for that.”

The Nevers creator Joss Whedon has made a career of crafting fantasy projects that “rhyme.” Buffy the Vampire Slayer used its vampire slaying premise to examine what society expects and demands from young women. Firefly crafted a swashbuckling space opera to ask what freedom really means and whether it’s ever truly attainable. Whedon’s version of The Nevers was set to be a return to TV form for the showrunner after years spent shepherding blockbusters like Marvel’s Avengers, and the theatrical version of Justice League.

But of course, that return proved to be fairly short lived. Whedon stepped down as showrunner of the show he developed in November of last year, citing the physical demands of “making such a huge show during a global pandemic.” HBO’s statement on the matter was a terse “We have parted ways with Joss Whedon. We remain excited about the future of The Nevers and look forward to its premiere in the summer of 2021.”

An important bit of context here is that over the past several years, Whedon has been accused of inappropriate and abusive behavior on his sets. Justice League actor Ray Fisher reported that Whedon’s conduct during filming of that movie was “gross, abusive, unprofessional, and completely unacceptable.” That led to an investigation by WarnerMedia, which culminated in unspecified “remedial action.” In February, Buffy the Vampire Slayer actress Charisma Carpenter similarly tweeted that Whedon abused his power on that set.

Though Whedon may be gone from The Nevers (and thoroughly scrubbed from the show’s marketing material), his original vision will remain intact for at least the first six episodes. In addition to the uncomfortable showrunner departure, The Nevers had to deal with a production schedule severely interrupted by COVID-19 that turned a 10-episode first season order into two blocks of six and four episodes. Episodes five and six of Whedon’s version of the show were filmed and wrapped under HBO’s new COVID guidelines.

“When we went back to film I think HBO was really ahead of the game,” Penance Adair actress Ann Skelly says. “They installed whole new air ventilation system in the studios. They built a set that was supposed to be in a Greenwich location in one of our studios. They made it work somehow.”

Amy Manson, who plays the villainess Maladie, notes the irony in a show about “The Touched” filming during an era in which human touch could be dangerous.

“We’re a tactile bunch,” she says. “But, I think we all felt safe. Everyone from your driver to the brilliant chefs, to producers, were all being tested three times a week. That made it easier for the cast to be able to be on set minus masks, do our jobs, and not feel unsafe.”

The Nevers certainly wasn’t the first series to emerge from a COVID production environment and it won’t be the last, but it might be the first major test case of how a big pay cable endeavor can adapt its process. It’s also a test case for how television can navigate a Joss Whedon property without Joss Whedon.

Tasked with tackling the scale that Whedon left behind now is British screenwriter Philippa Goslett, writer of How To Talk to Girls at Parties and 2018’s Mary Magdalene.

Donnelly, for one, believes that the fictional world already set in motion should be big enough to accommodate new imaginations.

“These first six episodes are only really scratching the surface,” Donnelly says. “Having spoken to Philippa, she’s given me a rough idea of the arc for the next six episodes as she sees them. The ideas that are coming through there and how much more that’s expanding the world of the characters further.”

The back half of The Nevers first season does not yet have a release date. When it returns, however, it will be coming from a British and female showrunner perspective that more closely matches the series’ central characters. In the meantime, The Nevers cast is confident that the show can make do with episode 6 as an unexpected midseason finale.

“It couldn’t be more brilliant if it tried. It’s the perfect place to just have a mid season hiatus, for sure,” Manson says.