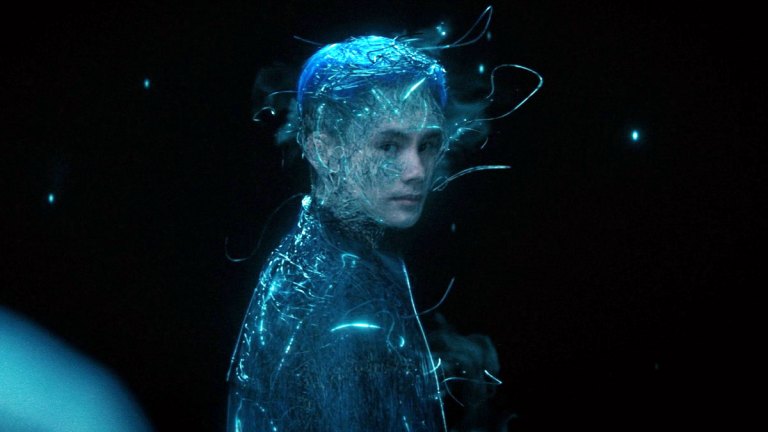 Starfleet doesn’t always seek out new life and new civilizations; sometimes, it accidentally creates it. Fans of Star Trek: The Next Generation can easily quote from various Picard monologues in the classic episode “The Measure of a Man,” but what about the Voyager episode “Author, Author?” Just like Data had to prove his sentience in TNG, the holographic Doctor fought for his rights to express himself when he released his holographic pseudo-memoir, Photons Be Free! And, now, with a last-minute twist on Star Trek: Discovery, it appears that the liberation of sentient holograms could become a big deal again. Here’s why one twist in the Discovery finale, “That Hope is You, Part 2,” has big implications for Season 4, and the rest of Trek canon, too.

When Adira heroically beams-in the radiation-soaked dilithium planet to bring Culber and Saru some much-needed medication, their appearance is modified by the intelligent holographic matrix to make them look Xahean. (That’s the alien race Po belonged to in the Short Treks episode “Runaway,” and Discovery Season 2.) But, the big twist that comes next is that suddenly, we see Gray, who is now made to look not like a Trill, but a Vulcan! The holo-program has extrapolated Gray’s conciseness and revealed him in a holographic form! Within the context of the finale, this makes Gray “seen” by Saru and Culber, not just Adira. But, when Su’Kal deactivates the holographic program, that means everyone reverts to their “normal” appearances, and Gray ceases to be visible.

So, what’s going on? Well, it seems that Gray’s conciseness inside the Tal symbiont is acting independently of the previous hosts. There is precedent for this in the Deep Space Nine episode “Facets.” In that episode, the personality of Curzon Dax decided to stay in the body of Odo and planned to do so indefinitely. The particulars are different, but the point is, the idea that one part of a Trill symbiont’s memories could live in another form outside of the symbiont is not unheard of.

On top of that, if the long-term fix for bringing Gray back is still rooted in holographic technology, then suddenly we’re back in Voyager territory. In the era of Voyager, the civil rights of holographs were still being debated. By the time of Picard — roughly 20 years later — not much seems to have changed. In 3189, the Federation is using a variety of holograms — including a lie director named Eli —but we don’t really see them enough to get a real sense of their levels of sentience. Basically, we don’t know if the post-Burn holograms are treated like holograms of old (slaves) or if they have programming that gives them independence.

Either way, the tech clearly exists for Gray to be brought back again, in a “holographic” body. In Voyager, the Doctor was eventually given a “mobile emitter” which was harvested from 29th Century Starfleet tech. At the time, that was a gizmo from the future, but in Discovery Season 3, that tech is in Starfleet’s past. It makes sense that some of Starfleet’s technology would have been set back a little bit after the Burn, but that doesn’t mean they don’t know how to make holograms live mobile, and fulfilling lives!

Culber promises Gray that he will be seen at some point in the future. But, both Discovery and Voyager have established that technology basically already exists anyway. This means the bigger questions will be less about how Gray is seen, and more about what it actually means in the context of Trek. In Voyager, the Doctor led a revolution for holographic rights. We’re not really sure how that played out. But, now that Gray is poised to (maybe) live again in a holographic body, then perhaps a long-overdue reckoning for holograms can finally take place. Photons Be Free! Viva Gray!