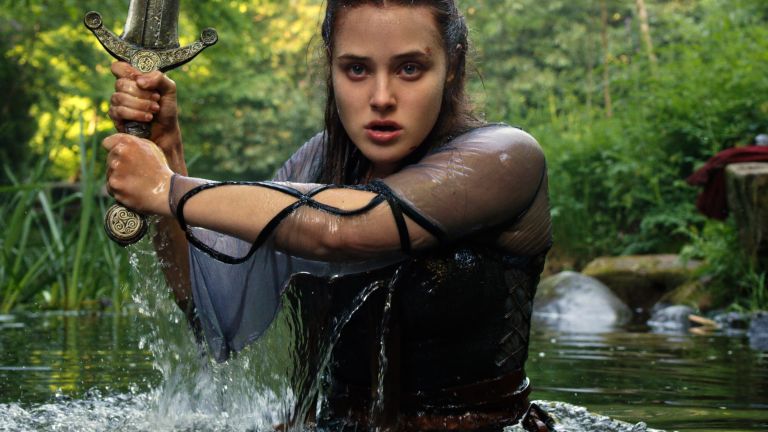 Netflix’s new fantasy drama Cursed is an Arthurian retelling that asks an intriguing – and long overdue – question: What if the central figure of the story is a woman, instead of a man?

For while there are several familiar female figures in the various legends of King Arthur, they’re not generally presented as the drivers of the action. Instead, they tend to live largely at the margins of stories about men, popping up just in time to fall in love, get kidnapped, or give birth to a son with a destiny that far outstrips their own.

Cursed attempts to bring a feminist perspective to this traditionally very male story, by placing a woman at its center who rarely gets her due: The Lady of the Lake. Often known as Nimue – or Niniane, or Viviane, or nothing at all, depending on who you read – she’s a powerful enchantress who guards the sword Excalibur and/or entraps Merlin in a tree. (Sometimes both!) The original legends don’t exactly tell us a whole lot about who she was or what she wanted, thereby leaving a narrative gap that Cursed authors and series co-creators Tom Wheeler and Frank Miller were more than happy to fill.

In this version of the tale, Katherine Langford (13 Reasons Why) stars as Nimue, but she isn’t the Lady of the Lake just yet – merely a young girl with a powerful gift struggling to fit in among people who fear her and her abilities. But when she’s given an ancient sword with instructions to take it to the legendary wizard Merlin, her life – and maybe her destiny – will change forever.

“I’m really thankful that I was able to be a part of something like this,” Langford says. “There really aren’t that many roles where these women are put at the epicenter of these legendary tales. It felt incredible and so empowering.” 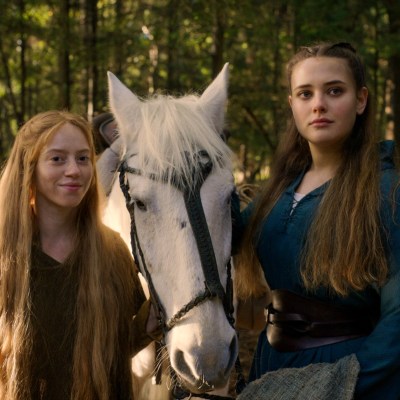 As far as Arthurian characters go, there really isn’t a definitive version of the Lady of the Lake. A character who is oft-mentioned but rarely fully explored, she’s usually not presented as a three-dimensional person with a life of her own.

“It was so shocking when I was doing a lot of my prep work – although we’re so familiar with this legend and it’s literally been told for hundreds and hundreds of years we very seldom if ever dive into the female characters,” Langford says. “Particularly, the Lady of the Lake, who is this powerful and iconic figure in the Arthurian legends.

“It felt like a very exciting opportunity not only to be able to tell her story, but I think also to bring to light the story of a true heroine, and to acknowledge a woman’s journey to becoming a hero with all of the obstacles that are specific to that.”

For Langford, the world of Cursed is quite a departure from her breakout role on Netflix’s 13 Reasons Why, where she played a teenager who commits suicide and leaves a series of recorded tapes behind for her classmates.

“This role in general, it’s so different to anything that I’ve done before, not only in terms of the genre but in terms of the vast skill set that I had to learn in a quick period of time,” Langford says.

From horseback riding to the complex stunt and sword work, her performance is extremely physical. And the show deliberately leans into these iconic, feminist images – Nimue confidently wielding the sword, fighting a pack of giant wolves on her own, facing down a pursuing group of dangerous Red Paladins after rising dramatically from yes, you guessed it, a lake.

“Even shooting – there are challenges that are specific to a fantasy and an epic piece that really aren’t applicable for other kinds of genres. When we were trying to decide on the sword, [and] what the sword should look like – because it was handcrafted -I was testing these different swords out and they were like, “This is Russell Crowe’s; this is Chris Pine’s; this is Timothee Chalmet’s; this is this person’s,” Langford explains. “But [when it came to] this character Nimue, it’s the first time they’re crafting a sword for a queen, for a woman.”

Nimue’s relationship to the sword evolves over the course of the series, as she herself becomes more comfortable wielding it, and learns more about both what it is and how using it affects her. But with the help of a young mercenary named Arthur, she also learns something else: How to be a leader in her own right.

Though Cursed is a period fantasy series, it nevertheless touches on multiple issues that still resonate for modern audiences. From religious persecution to the continued oppression of those who are deemed “other” in some way, this is a story that’s still very grounded in questions of humanity and the legitimacy of power.

“For me, good fantasy is not only an escape but it also comments on things that are relevant in a way that is subtle,” Langford says. “I feel like all these themes and issues, they’ve always been relevant and always been important to talk about. The story centers around [the] obliteration of the natural world and senseless war. There’s a lot of themes, but the big journey, especially for Nimue, is embracing yourself.

“Whether that’s good or bad, no matter what someone says, it’s about embracing all of you, to be the best self that you can be. And to have the courage to fight for justice in the face of adversity. I feel like that sentiment is something that’s very relevant now. And that hopefully when people watch this, [it’s something that] they might be able to reflect on given the current times.”

All hail the queen, indeed.