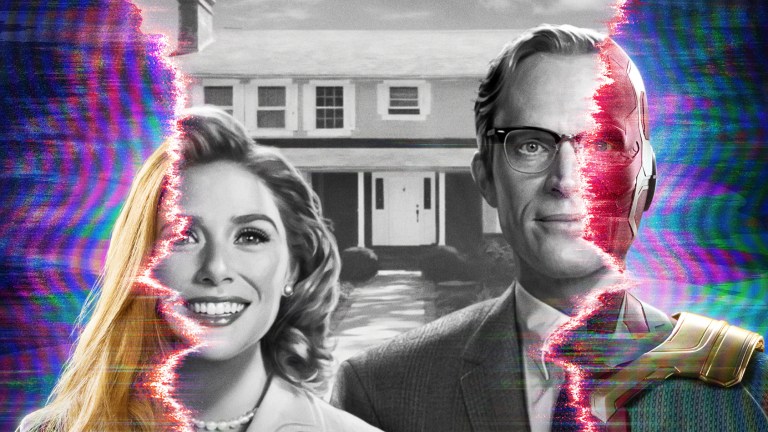 When Marvel first announced that it would be creating a spinoff show for Disney+ led by MCU superheroes Wanda Maximoff aka Scarlet Witch (Elizabeth Olsen) and Vision (Paul Bettany), there was some understandable confusion from fans who weren’t quite sure how it would work. After all, WandaVision wasn’t supposed to be a prequel, and as far as we were aware post-Avengers: Infinity War, Vision was, well, very dead. Dead as a doornail. Gone before The Snap and therefore quite lost. RIP to a real one, etc.

During the closing stages of Infinity War, the Avengers – along with T’Challa and the Wakandan armies – had tried to mount a defense against the forces of Thanos while Shuri worked to extract the Mind Stone from Vision’s forehead, but she was unable to remove it before Thanos arrived. Wanda eventually managed to destroy the Mind Stone – and Vision – but Thanos turned back time and plucked it out anyway. Both outcomes killed Vision.

In promoting WandaVision, Marvel played its cards close to its chest by keeping the plot fairly secretive, and simply teased that Wanda and Vision would be taking a trip down TV memory lane by living in their own versions of sitcoms past, like Bewitched and Roseanne, while something unsettling gnawed at the edge of their perfect white picket fence life. In embracing these old shows, the new series could certainly lean on any number of classic TV tropes to drag Vision back from the dead: true to the influences of WandaVision itself, the death of Dan Conner’s patriarch wasn’t a stumbling block for the Roseanne revival. Nor did Dallas have any problem revealing a previously extremely dead Bobby Ewing in the shower one fateful morning.

However, many fans kinda assumed that Wanda, devastated by the loss of Vision, had just decided to use amplified reality-altering powers to create a world where Vision was alive and well. It seemed the most logical scenario, as Wanda still clearly had a massive amount of untapped power – we’d just seen her shatter an Infinity Stone and she was pretty close to killing Thanos, too.

But arguably, WandaVision needs to have a more intriguing set-up beyond “Wanda has manifested a reality in which Vision is now alive and they have a lovely family,” because that’s what a lot of people – especially comic book geeks – expect. Could the series sign off with anything more complex than Wanda breaking away from this new reality and saying a teary goodbye to Vision again? It’d probably make for a heartbreaking nine-episode love story, but would also feel a little redundant.

Admittedly, when she was first introduced in Joss Whedon’s Avengers: Age of Ultron, Wanda already seemed quite adept at messing with other peoples’ perception of reality, but the focus on her powers subsequently shifted toward the more telekinetic, and away from her mind games. As Disney+ geared up to debut WandaVision, though, Olsen said that the series would explore more of Scarlet Witch’s comics-based powers.

This seems to align with Marvel boss Kevin Feige’s angle for the character’s spinoff series.

This feels like a key comment from Feige. Pre-Age of Ultron, Wanda and Pietro joined HYDRA and signed up to undergo experiments that involved the Mind Stone when it was still secured in Loki’s Scepter. These experiments were performed under the supervision of HYDRA leader Wolfgang von Strucker, who was said to have been killed shortly after Ultron went rogue.

If we take that story at face value, we might assume that Wanda’s powers were created by the Mind Stone, but what if they were only magnified by it? Are we about to find out that Wanda and Pietro had powers before those experiments began? Is this the start of “mutants in the MCU”?

In the comics, Scarlet Witch – who was once said to be the mutant daughter of Magneto before that backstory was retconned – is a Transian Sorceress, who was “enhanced” as a young orphan by the High Evolutionary at Mount Wundagore. Wanda became a conduit of Chaos Magic which gave her the power to manipulate probability and warp reality.

She fell in love with Vision, but was deeply affected by the fact that they couldn’t have kids together – so she altered reality to create some. When this scenario broke down, she lost the plot. Crucial to this fractured story was the involvement of Wanda’s mentor, Agatha Harkness, who Kathryn Hahn is rumored to be playing as nosy neighbor “Agnes” in WandaVision.

Marvel has also linked WandaVision to its upcoming MCU sequel, Doctor Strange in the Multiverse of Madness, noting that Olsen’s Scarlet Witch (and her Disney+ series) would be key to the movie’s plot.

Perhaps the grand story of WandaVision has even more tricks up its sleeve, and the multiverse will turn out to be a bigger factor than Wanda’s reality-bending powers. In one of the many, many possible futures that Stephen Strange saw during Avengers: Infinity War, was there one where Vision eventually regained the Mind Stone? If we’re dipping into the possibilities of the MCU multiverse, Vision might not be the only resurrected character in WandaVision – Pietro could be speeding around somewhere, too.

We’re about to find out if there really is a wizard (or witch) behind the curtain. WandaVision will be streaming on Disney+ from January 15.