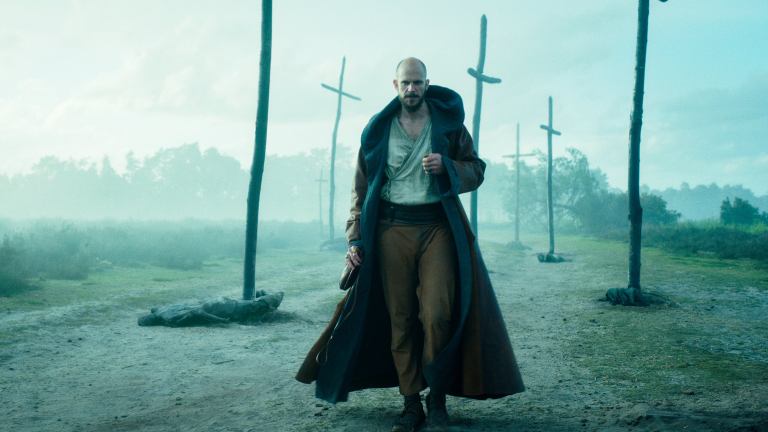 The following contains spoilers for Netflix’s CURSED. Read our spoiler-free review of the series here.

While Netflix’s Cursed focuses primarily on the story of Nimue, a young girl with a magical gift and a dark destiny as the future Lady of the Lake, it asks its audience to engage with the traditional tropes of Arthurian legend in new and interesting ways.

Cursed’s Merlin may also feel a bit strange to viewers who are only familiar with the character as the legendary wizard from film adaptations like Disney’s The Sword in the Stone, or the famous T.H. White novel it’s based on, The Once and Future King. In these – and most other – retellings, Merlin is a figure of great power and wisdom. His magical abilities are substantial and he’s generally depicted as a sort of all-seeing sage, who engineers the birth of Arthur and the rise of Camelot before falling victim to an ill-timed romance.

But that isn’t the version in author and series co-creator Tom Wheeler’s novel, nor is it the Merlin that appears here. In Cursed, Merlin is, to be blunt, a world-weary mess. Stripped of his magic and overly fond of alcohol, this character seems the furthest thing possible from an all-knowing, all-powerful wizard. And that’s not just an intentional choice on the part of Wheeler – it’s one that places this Merlin closer to his Welsh beginnings than many versions of the character that came afterward.

“It was very enticing as a writer to look at Merlin as the guy who’s not always 16 steps ahead,” Wheeler explained in a recent interview with Den of Geek.

“Merlin has lived for so long. And what’s great about him is he goes through these cycles, right? He’s gone through all of these lifetimes. We hit him at his low here, you know, where he’s doubting his role that he’s played in all this.”

The origins of Merlin as a character date all the way back to the sixth century and the writings of Geoffrey of Monmouth, a British cleric who’s generally considered responsible for much of British historiography as we know it today. His Historia Regnum Britanniae is a major source for much of the modern-day Arthur myth, and he allegedly based his Merlin on legendary Welsh figure Myrddin Wyllt, a prophet, madman and bard, whose name he simply Latinized for his audience.

Cursed’s Merlin bears a more than passing resemblance to this original Welsh figure, a wild man of the woods driven insane by the horrors of war and his own failures. This one is perhaps a bit more consistently intoxicated, but the sense of failure, fatigue and loss he carries around with him is tangible. 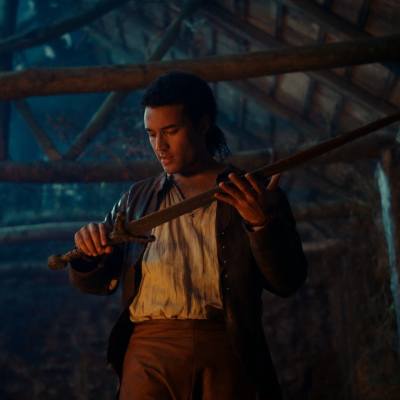 
Netflix’s Cursed Reinvents the Traditional Once and Future King 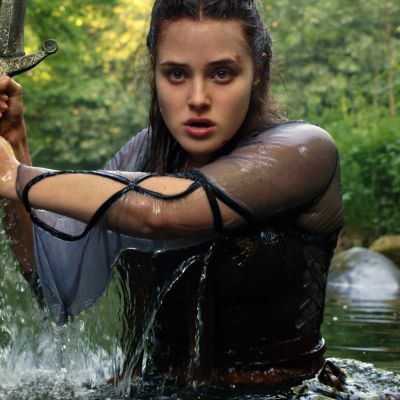 
How Katherine Langford Shakes Up Arthurian Legend in Netflix’s Cursed

“Gustav is wonderful. He’s such a wonderful human. He really makes Merlin his own. He really did bring that, that Merlin energy and that sense of timelessness and world-weariness. He just pours his heart into it. He has that ageless thing about him – it really conveys that sense of having seen it all.”

Though the story of Cursed hints at the events behind the supposed “legend” of Merlin – most people he meets are afraid of him to varying degrees and, at one point, Nimue doesn’t actually believe he’s real – we only see him use magic twice in the show’s ten episodes. (And one of those is as a flashback.)

“We [did take] his magic away, which was also kind of a roll of the dice,” Wheeler says. How’s this gonna work? But I think as you see the way the mythology unfolds and you see his relationship with the sword and what that cost him, it allowed us to get under his skin and feel a closer bond with him and hopefully differentiate him from some of our famous wizards that we’ve come to know and love.”

Another significant difference between Cursed and most of its source material is the relationship between Merlin and Nimue. In every other version of this story, Nimue is a love interest, one who ultimately steals his power for herself and locks him away forever afterward, usually in a cave or a tree. Here, she’s Merlin’s daughter, and though their relationship is equally contentious at points, it puts a very different spin on this age-old story.

“In a story like this, I think you want to get a little deeper into his emotional life and that that was the goal here. Merlin is allowed to be very vulnerable and heroic,” Wheeler explains.

“His experience with Nimue and getting to know her and recognizing a deeper connection with her, it’s scrambling his circuits. It’s throwing him off in a big way. And we start to see a Merlin who acts out of passion and is acting out of this sort of concern and it’s not the game he’s used to playing.”

Wheeler hints that his relationship with his daughter may well play a significant part in this Merlin ultimately becoming the man we’re more familiar with from legend.

“The idea of this sort of cold, merciless kind of, yes, all-seeing, all wise [figure] – those are attributes he will ultimately need to earn through this journey.”

Cursed itself uses a narrative gap in the traditional Arthur myth – the lack of a consistent origin story for the Lady of the Lake – to create its own. And in doing so, it gives its creators the chance to look at the stories of more familiar figures, such as Merlin and even Arthur himself, with fresh eyes.

“It was the sense of, if we’re going to move this mythology back and we’re going to readdress the origins of the sword and look at the idea that a woman held Excalibur first, I wanted to give all of these characters that we know and love, an opportunity to grow and change. To be transformed by [Nimue] and their association with her and [the journey] that they go on with her.”