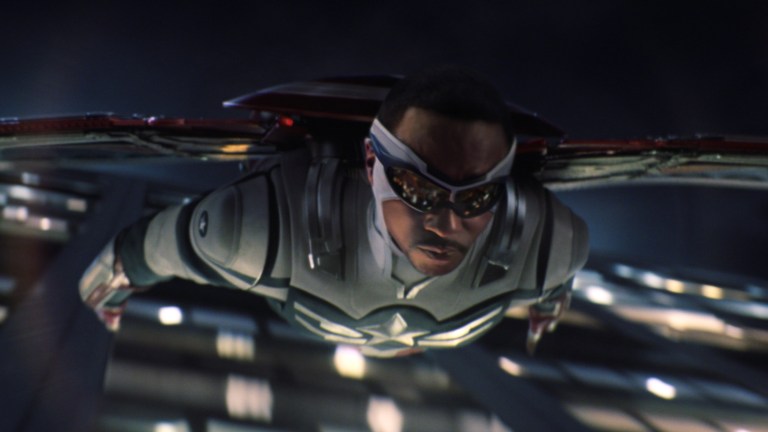 The Marvel Cinematic Universe and its fans may all be one big, happy, extended family — according to the exciting new sizzle reel that Marvel Studios released to the world on May 3 — but that doesn’t mean that, like every family, they don’t have their secrets as well.

We’re not talking about the secrets that Marvel keeps from us, the public, and the press; we know that Marvel head honcho Kevin Feige is the master of the thrilling-yet-utterly-devoid-of-information non-answer, and holds weekly classes instructing his minions in that very same and very rare dark art (and we do truly appreciate the skill, even as we tear out our hair over it).

No, apparently Marvel keeps secrets internally as well: as The Falcon and the Winter Soldier head writer Malcolm Spellman tells us, everyone working on various films and TV series inside the Marvel compound is on a need-to-know basis — and there’s very little that the top execs categorize as “need-to-know.”

“This is my favorite thing to answer because I feel like I have a great metaphor for it,” says Spellman cheerfully. “And it applies to everything. At Marvel, all the creatives are working on the shows and movie on the second floor. There’s a shared kitchen area, and at lunchtime, everyone goes in the kitchen area. I saw Ryan Coogler there once or twice. I saw [WandaVision head writer] Jac Schaeffer all the time. I saw Eric [Martin, executive producer/story editor] from Loki all the time. The woman [A.C. Bradley] who did What If…? — you see all these different people who are on all these different projects.”

But, Spellman continues, the chatter in the kitchen is not what you might expect. “Nobody talks about their project,” he reveals. “We’re not allowed to. I mean no clues or anything. They put you in that bubble.”

He continues, “So, imagine if you’re Spider-Man in the MCU, and you’re on top of the Empire State Building. You know what you’re looking at. You know what crime is going on, you might hear a bank alarm. If you see Iron Man flying overhead, or you see Black Widow speeding by in a car, you don’t know where they’re going, you just know something else is happening in the MCU. That’s how they keep us all the time.”

That pretty much lines up with something that Schaeffer herself told us a while back when we asked her if her team was in touch with the filmmaking teams for Doctor Strange in the Multiverse of Madness and Captain Marvel 2 (now renamed The Marvels), since there are direct connections between WandaVision and both films.

“There’s a lot of communication at Marvel that is overseen by the tremendous executives there,” she told us. “And so I’m told what I need to be told for my particular job.”

So just in case you can’t stand all the mystery, red herrings, and deflection surrounding the ever-expanding Marvel Cinematic Universe, don’t worry: the creatives making the very shows and movies you are craving information about don’t really know what’s going on either. But let’s all admit it — that’s kind of part of the fun.