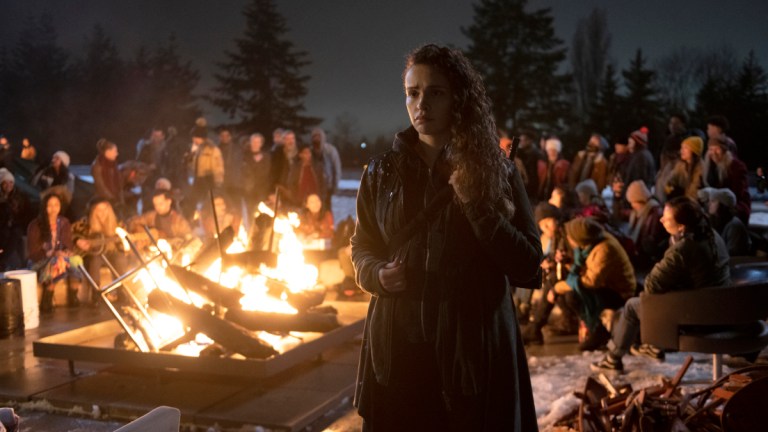 With “Anaconda,” The 100 has joined the pantheon of TV shows (including Supernatural, Gossip Girl, and The Office) that have introduced a backdoor pilot in the hopes that it will be greenlit to a full spinoff series. Now that we’ve re-met Bill Cadogan, his Second Dawn cult, and his family (whose clashes and burgeoning Grounder culture will be the heart of the series) we debate: Is The 100 a show that really needs a spinoff? After seven seasons, can we say “your fight is over,” or are there as many story ideas as there are symbol combinations on the Anomaly Stone?

Pro: Yes, “Anaconda” proves there are still stories worth telling in The 100 universe.

Prior to watching “Anaconda,” the backdoor pilot episode meant to sell us all on the value of a The 100 prequel series, I’ll admit that I wasn’t completely sold on the need for one. But this hour did one important thing right: It reminded me how great this universe is at telling stories about characters struggling through their darkest hours, and how that duress can forge heroes  – or monsters – from ordinary people.

Thanks to a luck of timing – or “our current hellscape nightmare scenario” depending on how you look at it – “Anaconda” also illustrates why right now is the perfect moment to tell a story like this, positioned to begin at the end of all things. Though we’re only given a brief glimpse into the show’s world of 2052, it certainly has an uncomfortably familiar feel, with its climate protests, police brutality and worries of overpopulation. Not to imply we’re all headed for bunker life anytime soon, but the overtones of a world we can recognize do make the hour feel more timely and relevant than its predecessor generally does.

Though we already know what Calliope Cadogan’s world will look like a century after she and her merry band of Nightblood teens climb out of the Second Dawn bunker hatch, we’re less clear on how exactly that will come to pass. And suddenly, I really want to know. How does this group of relatively familiar-seeming twentysomethings who want to save the remnants of humanity eventually turn into the violent and combative Grounder clans we met back in The 100’s initial seasons?

By the time our The 100 faves reach the ground, the world on post-apocalyptic Earth feels pretty well established. But “Anaconda” shows us that wasn’t always the case and now I desperately want to know how humanity got from one extreme to the other. What other kinds of survivors are out there? How do these people, so firmly united at the outset of this story, inevitably split apart? And where do other familiar horrors like the Mountain Men and the Reapers come in?

Full disclosure: I want to see this prequel get dark. I want the Bunker teens to struggle with the basics of survival, and pay the price for not knowing how to do things like hunt or forage. And beyond that: I want betrayal and horror. I want the full and complete breakdown of everything we understood as humanity in our world before the one the Grounders inhabit rises to take its place.

As a character, I really liked Callie, who seems to be a mix of Clarke’s bravery and Abby’s savior complex, topped off with an activist mentality/morality that feels entirely new to this universe. It’ll be interesting to see how a character like Callie adjusts to life in a world that’s almost exclusively focused on survival and the sort of hard choices she’s likely never had to make. She’s much more optimistic and hopeful than any character currently on The 100 and she has yet to embrace the tribalism that will come to define her people in the years to come.

However, for all that Callie is the “good” one in her family – if you define good by simply the act of not embracing a weird and creepy cult – she’s still been raised in a life of relative privilege and luxury, and even in the bunker her status as Cadogan’s daughter likely protected her from the worst of post-apocalyptic life. What sacrifices will she be asked to make, and how will they change her? (It feels as though she’s started down this path of darkness pretty definitively by shooting her brother.)

The idea of placing Callie at the center of what will essentially become Grounder culture as the first true Flamekeeper is also intriguing. To be fair, the idea of that entire culture tracking its roots back to things like Callie’s made-up childhood language or the fact that “Tree Crew” was originally an environmental activist group does seem a bit convenient. (It also feels a bit “chosen one”-ish, as well, which is admittedly tiresome.) But it’s never actually made a lot of sense that Grounder language would have changed so thoroughly in what is essentially three generations, max, so most of this really works for me. And it makes me wonder what other answers I didn’t know I needed that a The 100 prequel series based on “Anaconda” might give me. 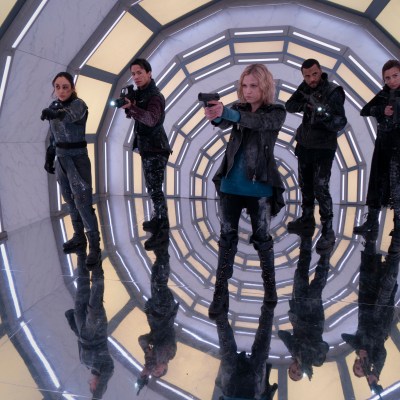 By Natalie Zutter and 1 other 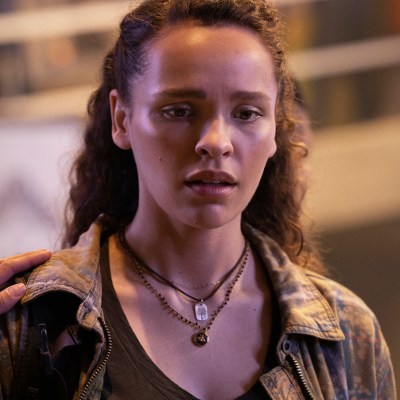 
The 100 Prequel Series Would Use a Lost-Like Flashback Format

By Lacy Baugher and 1 other

It kills me to say no, because I love this show and want to see its mythology live on beyond seven seasons. I’m just not convinced that this particular prequel series is the way to go.

It’s not personal; I have trouble justifying prequels in general, because I often find that they rely overmuch on dramatic irony and other established knowledge rather than finding ways to tell a good story that doesn’t rely on knowledge and emotional attachment to a different show. Prequels are often working within worldbuilding constraints when it comes to characters, in-show mythology, and the in-universe timeline—which doesn’t have to be a bad thing. In the case of The 100, we know that the Ark fails and that the Grounders ultimately suffer when they first cross paths with Skaikru. Prequel spinoffs can either adjust to the limits of a canon that was entrenched years earlier, or retcon it.

Unfortunately, it feels like “Anaconda” has done the latter. While I can’t make sweeping judgments based on one backdoor pilot, the reveal that Trigedasleng is, at least in part, a whimsical language that Calliope Cadogan made up as a child undercuts so much of what we’ve learned about Grounder culture over the past seven seasons. I’m in complete agreement with Lacy that it’s just too convenient that this Special Girl is at the center of everything, when the series had already explained how Trig came out of desperate years of survival and attempts to reunify after the world seemingly tore itself apart. Remember that the survivors all think various world leaders pointed nuclear warhead at each other; only Becca seems to know A.L.I.E.’s dirty secret.

Speaking of—Becca already somewhat occupied the too-convenient role of being a key player in so much of the series’ history! From A.L.I.E. to Polis to Nightblood to being the first Heda, this character was already centered in a half-dozen preexisting plotlines, a ready-made protagonist in whom the audience was emotionally invested. To jump ahead to her death (that we already knew was coming) and pass on the Flame to Callie seems like The 100 prequel is trying to forcibly justify its own existence through new, untested characters for the sake of having unfamiliar faces.

What could save this narrative choice, to Lacy’s other great point, is the possibility of Callie confronting her own privilege as she voluntarily moves through the nuclear post-apocalypse. It’s one thing to bravely decide to shrug off the comforts of the bunker and to go looking for the people who weren’t considered “worth” saving. It’s another to actually survive: learn to hunt and forage, set up the necessary hierarchies so their ragtag group doesn’t devolve into anarchy, and make the difficult decisions (about laws, about justice, about consequences) when people stop cooperating.

In many ways, it could be a poetic parallel to the early days of the original 100, as the delinquents debated whether they were in an eternal, no-parents-allowed party, or their own futuristic Lord of the Flies. And as we all know, the party was over when Jasper got speared by a Grounder.

Even if Callie is the creator of Trig, and even if she and August establish clans inspired by his Tree Crew tattoo, they need their own foil, the way the Grounders were for the 100. That could be some sort of survivalists or militia, to foreshadow the bloodier side of Grounder society; or people like her friend Lucy, who were left behind to die but didn’t, and who have had two years of resentment to take out on these Second Dawn defectors. But none of that is in the backdoor pilot, so it’s difficult to judge if the series might go that route.

My biggest mental block is that I’m just not emotionally invested in Callie or the Cadogans. Despite “Anaconda” setting up broad strokes for their different relationship dynamics, none of Callie’s decisions seemed truly difficult. Again, she was privileged enough to decide to leave, even if it were for the noble cause of finding other people who deserved to be saved more than she did. I’m just not sure that that noble thinking is enough to justify an entire TV series.

“Anaconda” took too many narrative gymnastics to recontextualize the show’s mythology that was already pretty well-established. I would rather see a The 100 spinoff that takes place in the future. We’ve already done a six-year time jump in real-time and a 125-year jump thanks to cryogenics, and now there’s a quintet of planets with convenient wormholes and screwy timezones—the show has established various routes to tell a story even farther in the future than its own future! We don’t know how The 100 will end, with the Disciples’ great war or the fates of the handful of survivors that started out as the original 100; but I would rather see their descendants’ adventures, covering entirely new ground as opposed to retracing old steps.

What do you think? Does The 100 justify a spinoff? Let us know your thoughts in the comments below.