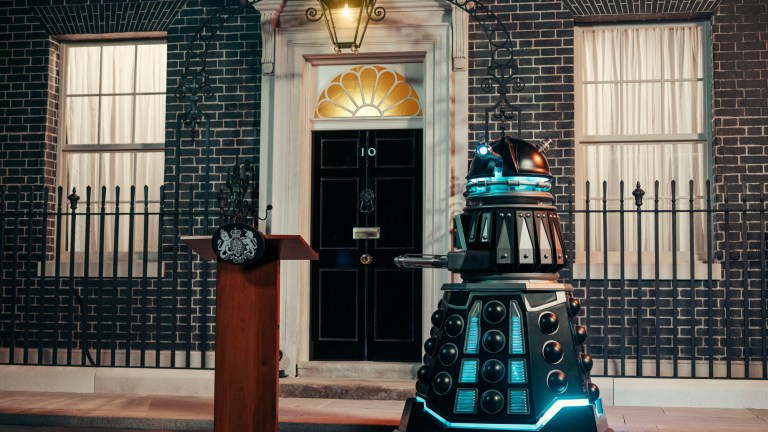 A scene that did not appear in New Year’s Day’s Doctor Who Special, ‘Revolution of the Daleks’.

SCENE: EXT. 10 DOWNING STREET, A PRESS CONFERENCE IS BEING HELD

PRIME MINISTER JO PATTERSON: …and so I introduce to you, our new, fully automated defence drones!

A “DEFENCE DRONE” GLIDES INTO VIEW.

JOURNALIST: A Dalek? About twelve years ago they transported the entire planet through space then rounded humans up in the streets and exterminated them?

ANOTHER JOURNALIST: Yeah, and a few years before that a bunch of them came flying out of Canary Wharf?

JOURNALIST: Come on! They murdered one of your predecessors!

PM: Excuse me, but you can’t honestly expect me to remember every single British Prime Minister that suffered a violent death over the last two decades. We all know this job has the life expectancy of a Defence Against the Dark Arts teacher.

PM’S ADVISOR: Actually, Prime Minister, talking of your predecessors, Winston Churchill did try this exact same plan with a very similar looking contraption during the War, and I hear that went badly.

PM: I mean, I’m sure I believe you. I’m just saying this is all news to me.

JOURNALIST: Very well. Moving on, how will these “Defence Drones” help us deal with the Covid-19 pandemic?

Doctor Who has always been a series that points and laughs at fans who want to try and piece together a consistent continuity across all its stories, but even by Doctor Who standards, forgetting an entire global invasion barely more than a decade ago (y’know, just before most of the show’s viewers were born, you absolute fossil you) might seem like a stretch.

Of course, the real reason Jo Patterson couldn’t remember the Daleks is that unlike say, the MCU, where weirdness layers upon weirdness to create a world that almost counts as alt-history, Doctor Who is, on some level, always reaching to be set in “our” universe. The key conceit of the show is that you might turn a corner, find a blue box, and suddenly be whisked away through space and time to a world of adventure. Which doesn’t really work if the British town squares of the Doctor Who universe all feature memorials to the victims of the Daleks and diet pills have to be tested for Adipose DNA.

But at the same time, Doctor Who just loves a great big Hollywood space invasion, and making these two core ingredients of the show mesh is a nightmare for continuity.

Let’s, for instance, take a look at the life of recently departed Doctor’s companion, Ryan Sinclair. 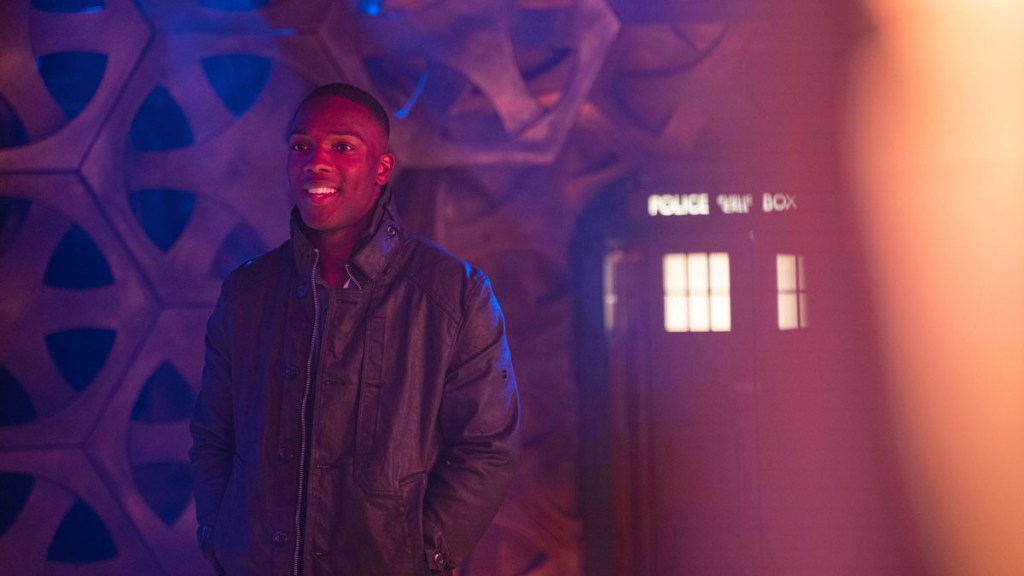 Ryan was born in 1998 or 1999. As a child, he attended Redlands Primary School at around the same time London was hit by a “terrorist attack” when shop windows dummies started shooting people. A year later a spaceship crashed into Big Ben, although this was later dismissed as a hoax. That Christmas Day, when Ryan was around eight years old, every human with O negative blood got up in a trance and went and stood on a tall building while a gigantic spaceship hung over London.

Still Ryan is a kid, he doesn’t watch the news, maybe nobody in his family is O negative and let’s face it, news of a lot of this stuff probably doesn’t get as far as Sheffield.

However, even in Sheffield he would have seen the regular “ghost shifts” that appeared all over the world, and at nine years old he would have been traumatised to have his home, like so many others, invaded by Cybermen before they all got sucked away by something.

His family make the wise decision not to turn on the news that Christmas, so he doesn’t hear about the “Christmas star” attack, or later that year a hospital being teleported to the moon, and while he probably remembers grown-ups getting very excited by Harold Saxon getting elected, fortunately most of his tenure as Prime Minister was erased from history.


Doctor Who: Which New Doctors Are Now Canon?


Doctor Who: the genius of making the Cybermen an ideology

And then of course, the Earth was teleported across space, planets filled the skies, and Daleks roamed the streets rounding people up. He would have been about the same age as future astronaut and Mars colonist, Adelaide Brooke at this time, and she was profoundly affected by the experience.

After that it’s possible the government may have rounded up him and his classmates to offer up to the 456.

To round the year off, Ryan actually turned into Harold Saxon for a bit. This was probably, on balance, the worst Christmas of the lot.

2011 was largely uneventful except that nobody could die.

Ryan went on to see the Tenth Doctor light the flame at the 2012 Olympics, was briefly into that whole “mysterious black cubes” craze before they got banned for some reason, and while he was in high school the entire Earth was covered in dense forest overnight but that disappeared, and nobody ever mentioned it again. The Cybermen invaded again. Then, not long after Ryan left school, the entire world was taken over by a species of really gross looking mummified monks who claimed to have always been in charge, before they also disappeared overnight.

Not long after that, Ryan met the Doctor for the first time and was shocked, shocked, to discover that aliens exist.

Steven Moffat did give us one handy explanation for why nobody in Doctor Who remembers the Dalek invasion, or the giant steampunk Cyberman that invaded Victorian London, and probably much more. In ‘Victory of the Daleks’ the Doctor tries to persuade Winston Churchill that using his own force of Daleks to secure the country was a bad idea, and he turns to Amy, who would have seen that invasion, to back him up. She has no idea what’s he’s talking about.

Later it’s revealed this is because the TARDIS explodes, destroying the entire universe with it. The cracks in time left by that explosion erased all kinds of events from history, including, handily, anything that would cause the human view of the universe to deviate too far from the real-world status quo.

Of course, that does leave some problems. Adelaide Brooke, again, clearly remembers the Dalek invasion and it was a moment so formative and influential on her eventual Fixed Point In Time that even the Dalek she saw (who, I remind you, was working on a plot to destroy literally all existence) didn’t dare exterminate her because of its influence on the timeline. And since it’s not implied the crack in time could bring anyone back from the dead, it does make you wonder what history says happened to Harriet Jones (former Prime Minister) and all the many others killed by the Daleks.

But maybe you don’t need a giant retconning Crack in Time?

Because while the Doctor has often waxed lyrical about humanity being indomitable, creative, and curious, there is also a lesser innate human quality the Doctor sometimes mentions: our absent-mindedness.

The Forgetfulness of the Daleks 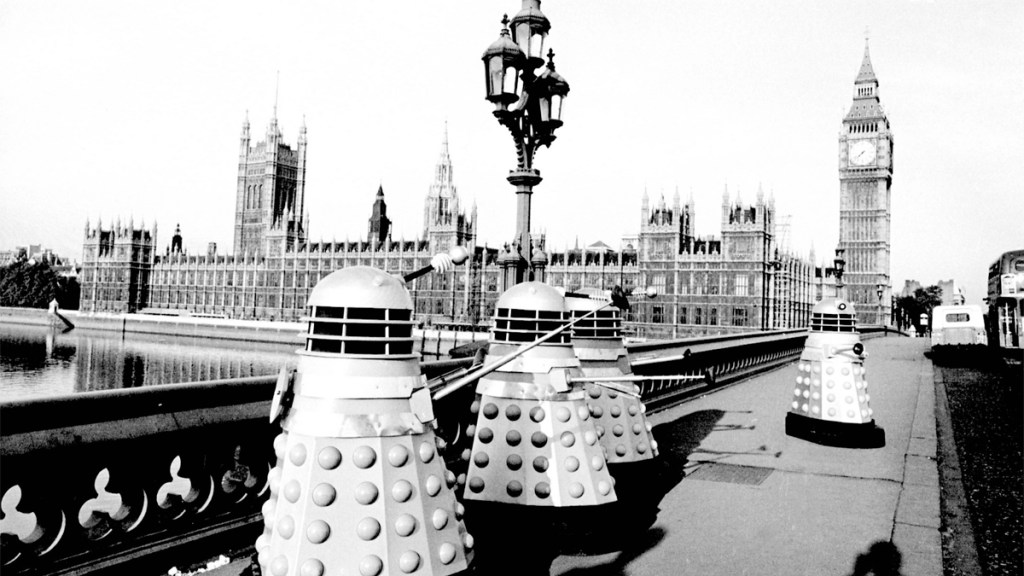 As well as the Dalek incursions in ‘The Stolen Earth’ and ‘The Army of Ghosts’, there was another Dalek visitation of Earth in the ironically named ‘Remembrance of the Daleks’, which was set in 1963. During this adventure then-companion Ace points out she doesn’t remember anything about Daleks invading in the 1960s. The Doctor replies, “Do you remember the Zygon gambit with the Loch Ness Monster? Or the Yeti in the Underground? Your species has an amazing capacity for self-deception.”

Likewise, nobody remembers dinosaurs invading London, or the other time shop window dummies came to life and started killing people, or when the Earth encountered its exact twin. Without any cracks in time hanging around, Doctor Who falls back on an old staple of fantasy and sci-fi- that humans just ignore anything that doesn’t fit into their worldview.

As we’ve already mentioned, this turns up a couple of times in the new series as well. In ‘In the Forest of the Night’, the entire planet is overnight covered in forest for reasons that we’re not going to go into too closely because that story’s a bit of an embarrassment to be honest. As the forest disappears at the end of the story the Doctor says it will be forgotten outside of fairy stories, because that’s “a human superpower”.

It can even work two-way. In ‘The Lie of the Land’, the entire Earth is taken over by the gross-looking and mysterious “monks”. Using a psychic link, the monks convince humanity that not only are they humanity’s generous benefactors, but also that the monks have always been here, guiding human evolution. This is of course a lie, as the monks are actually one of the very few aliens not to have guided human evolution at some point.

After the Doctor does his thing and the monks’ statues are torn down, someone passes by the ruins of one and wonders what it was. Already, people are forgetting.

Which, if you think about it, is a Doctor Who story in itself. Imagine being an alien visiting Earth. Humanity must seem like the Silence, but in reverse- as soon as they stop looking at you they forget you exist. The Doctor really ought to take a look at that some time.