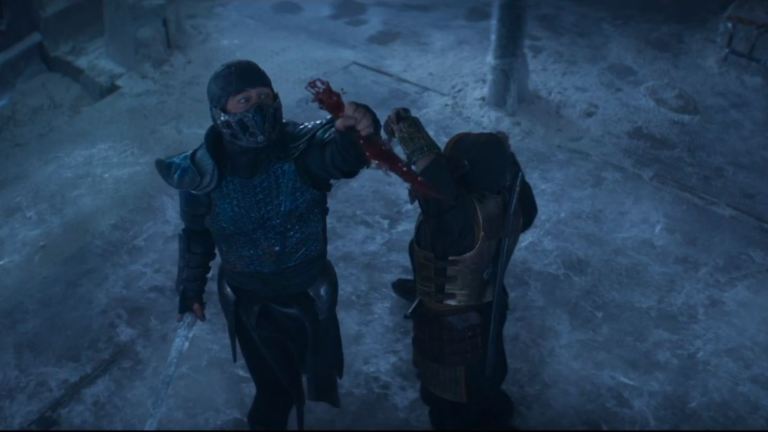 The Mortal Kombat reboot movie from Warner Bros. has been a longtime coming. In fact, a fresh start for the film franchise has been in the works since at least 2010 when director Kevin Tancharoen pitched a movie called Mortal Kombat: Rebirth to Warner Bros. That project ended up in development hell, and it was Aquaman director James Wan who next picked up the torch in 2015 as producer, with newcomer Simon McQuoid directing from a script penned by Greg Russo. This is the reboot that you’ll finally get to see on HBO Max on April 16.

Ahead of the movie’s release, WB has dropped the first trailer for this decidedly more grown-up big-screen take on the beloved video game series. Delivering all of the blood and guts you’d expect from a modern, grittier Mortal Kombat adaptation, the trailer explains the gruesome reason why Jax ended up with his bionic metal arms, teases a scene where Kano rips a monster’s heart out of its chest, and even nods at a few Fatalities from the games. Most importantly, Sub-Zero and Scorpion, objectively the two best Mortal Kombat characters, finally get the gory movie rematch we’ve all dreamed of since the ’90s.

Yes, these ninjas have been rivals since the very first game and have fought across all mediums at this point, but unfortunately, the only time they’ve duked it out in a movie is in the terrible Mortal Kombat: Annihilation, the 1997 John R. Leonetti sequel to the slightly better Paul W.S. Anderson 1995 original. Seriously, this movie sucks for a myriad reasons, including the awful writing, cheap sets, and questionable recasts, but its long-awaited Scorpion vs. Sub-Zero moment might be its worst offense.

Imagine growing up with the vastly superior 1993 Sega Genesis home console version that featured all of the campy, uncensored violence of the arcade cabinet, playing Sub-Zero (my fav) vs. Scorpion countless times, and then being treated to their tacky slow-motion fight in Annihilation on that comically flimsy set. It barely looks like they’re even hitting each other as they “duke it out” across an ice bridge that looks like it’s made of foam and in a set of narrow, poorly lit hallways.

At one point, Sub-Zero actor Keith Cooke is forced to act like he’s about to fall into a pit of lava, arms outstretched as he pretends to be frightened by the clearly computer-generated fiery death below. It’s all so painful to watch. And the fight ends without a clear winner, no fatality, not even a single icicle through Scorpion’s head.

Instead, that yellow-clad bozo kidnaps Kitana and shouts, “SUCKERS!” as he makes his escape. It’s clear he’s speaking to the audience here, all of the people who bought a ticket to finally watch Sub-Zero and Scorpion settle their rivalry once and for all. Suckers indeed.

If you’ve never watched this scene, then I’m so sorry but:

Fortunately, McQuoid’s Mortal Kombat reboot seems to bring the goods. The trailer teases a big fight between the two ninjas, one that features ice daggers and a frozen blood icicle that Sub-Zero uses to stab Scorpion before throwing him through a spiky ice wall.

But even beyond their fight, we get to see both characters on rampages elsewhere. Sub-Zero (Joe Taslim) clowns Jax in the opening scene of the trailer, while Scorpion (Hiroyuki Sanada) makes quick work of some of Sub-Zero’s minions before what looks like the faithful moment in which he’ll be slain and turned into the undead warrior from Hell we all know and love (at least if this movie follows the game lore).

Check out the action for yourself:

While it’s never a smart move to bet in favor of a big-studio video game adaptation, everything we’ve seen from the reboot so far so far paints a tale of redemption for the Mortal Kombat live-action movie franchise. At the very least, it’ll deliver a few fights that more closely resemble the classic games that allowed these films to exist in the first place.